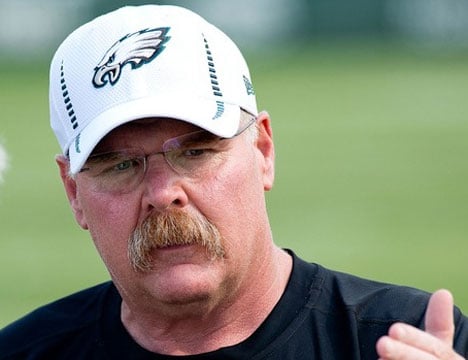 For the Philadelphia Eagles fan, passion is rarely questioned.

Year after year, the person clad in green ends up on the short end of the stick. The disappointment is furthered by rivals' successes. Failure is the norm.

An old uncle once told a boy, "The Eagles will always let you down."

His prophecy is fulfilled every season.

Through the past 13 years, the large man in black has roamed the sidelines. Calculated in all things aside from time management, he's had some good teams.

Like the Eagles fan, he's yet to taste the glory as a head coach.

When it comes tumbling down, all eyes look in his direction. Fairly or not, he's become a divisive figure in Philadelphia sports. Some say he should have lost his job years ago. Some say now is the time to put him out to pasture.

Others support the man in black. They say the team's never had anyone better. They're probably right.

Sunday, Andy Reid lost his son. Garrett Reid was found dead in a Lehigh University dorm room. You all know this by now.

What will happen this year is anyone's guess when it comes to the success of the Eagles. Perhaps the event serves as a galvanizing moment that brings everyone together. Every teammate on the same page, searching for more than a Super Bowl bonus.

Or, maybe Reid will be unable to duplicate the steadfast march that Tony Dungy exemplified in 2005 after losing his son to suicide.

The team could fall apart. They could also come together.

Sports is evaluated in wins and losses. There's black and white in that evaluation. It's what makes the result so important, as the final score is all that matters.

Moral victories are shot down in a moment's time, with eyes moving forward to look at the next challenge. How can a team beat the next team and continue the winning streak? Is there any way this group of men can break out of the slump?

The process is of little importance to the consumer until the final scores and stats represent its completion.

So, if the Eagles follow suit and fail to hoist the Lombardi Trophy this season (like every other year it has been awarded), the season will be a failure.

Every other year, the blame has fallen on Reid. He challenges at puzzling times during games. The team always ends up needing a timeout when it was wasted on a snafu early in the half. It's a conundrum wrapped in an enigma the way the Eagles find ways to lose. It's what makes them the Eagles.

Also, it's what makes Reid the center of the spotlight.

This season, a man will attempt to lead a group of men knowing full well that he's lost one of his children. He'll do everything possible to stay in the moment with his team. Yet, it seems to the outsider like that will be close to impossible.

The short end of the stick has already been handed to Reid, and it's much shorter than 52 years without a title.

What has been presented with the tragedy that the coach is dealing with is an opportunity for the Eagles fan. An opportunity to harness that passion and direct it with faith in the man who's putting himself on the line.

It's a line much more treacherous than the razor-thin line between win and loss. There is no black and white in this dilemma, only black and blue.

If that passion can be put behind Reid, if the very best can come out in the fans clad in green, it will mean more than a good record.

This year's roster may be the most talented the Eagles have had. They seem poised for success. Reid will lead them into the stadium as favorites often through the season.

And while the fan will continue to evaluate success by looking at the columns marked with a W or L, there's more at stake here.

Sports are the human drama. They are the manifestation of the natural human spirit. Raw and unbridled thoughts and feelings come out with a die-hard when the season begins.

A show of appreciation and a level of understanding that can be presented to Reid will be more than overdue. It will also be more than appropriate.

It's not because the wins and losses will come afterward; it's because it's the right thing to do. It's a way to spend that famous passion as it should be spent.

After tragedy, a man must give what he can to make it to the next day. He will look back on the bottom and realize that it brought the best out of him.

For the fans behind that man, this must also bring out the best in them. It's only fair.

5 Replies to “It's Time To Rally Around Andy Reid”