The NBA’s Conference Finals began last night. I’ll be keeping tabs on the rest of the post season with a series of journal entries about the games, the players, the coaches, and the culture. Today’s entry begins with the huge games both Steph Curry and James Harden had. Enjoy.

It doesn’t feel right to address Game 1 of the WCF without pointing out that we got exactly what we wanted from both Steph Curry and James Harden. For everything unbelievable that Curry does, I find myself most in awe over how quick the release of his jumper is. A lot of shooters have quick releases, but not many can pull the six-shooter out of the holster off the dribble quite like Steph. Harden doesn’t have quite the speed on the release, but his ability to create separation in the mid-range was equally as impressive. Both players played key roles in digging their respective teams out of double-digit holes, making for a really fun Game 1.

It’s often thrilling when the role players have huge nights, but few things in hoops top an old-fashioned shootout between the league’s MVP and the runner up, especially when a trip to the Finals is on the line. Curry probably had better singular moments, and finished with more points, but I found myself much more impressed with Harden on the night. When his shot wasn’t falling, he was getting teammates involved and crashing the glass, once he knew he had it going, it was guns-a-blazin’, which made for a really fun six-minute stretch in the fourth quarter.

What wasn’t expected, however, and what may have won the game for the Warriors, is how Curry was able to get a couple of easy buckets under the rim late in the fourth. Head coach Steve Kerr moved Curry off the ball for a few possessions and had him run some baseline action sets where he was setting screens. The Rockets were a bit confused on how or who to defend, leaving Steph wide open under the rim. I wouldn’t expect to see Steph wide open under the rim too many more times this series, but I’m looking forward to many more big performances between these two.

Despite what the box score, and hell, your eyes told you, Dwight Howard is going to play a key role in this series. If the Rockets are going to have any success, Howard’s impact is going to be similar to the first eight minutes of last night’s game, scaled over 30+ minutes. The numbers suggest that Howard had little impact on the game in the minutes that he actually played, but I saw a different story. It was quite some time into the first quarter that the Warriors scored their first points in the paint outside of transition baskets, and on the other end, Howard was doing the little thing to help the Rockets offense while he was struggling when he actually had the ball in his hands.

Further more, Howard and Josh Smith have found a nice groove in those 4/5 P&R sets that teams haven’t been able to figure out. This isn’t new for Howard because he’s been taking advantage of 4/5 P&R sets his whole career — from Hedo Turkoglu in Orlando to Pau Gasol in Los Angeles — as having such an athletic finisher on the other end of a pick and roll with another big who can score or hurt you with deft passing is near impossible to defend with any kind of consistency. His turnovers are less than a problem than the fact that he just wasn’t able to play enough consistent minutes to get into any kind of groove with both foul trouble and health issues.

Howard not playing many minutes (and some ineffective minutes due to the knee injury) allowed Golden State to pick up the tempo of the game and play a brand of small ball that hugely favors them. Howard isn’t going to need to score the ball, but his mere presence is only going to make Smith a better player and take some of the 4th quarter onus off of Harden’s shoulders. If healthy, Howard will be a much bigger problem for the Warriors moving forward.

In their 7-game series against the Clippers, they suffered losses due to huge games from Austin Rivers and a huge game from JJ Redick. In Game 1, they allowed Shaun Livingston to drop 16 on them in the first half, the highest-scoring half of his career. Livingston fueled the Warriors’ first huge flurry, helping turn a 16-point deficit into a 3-point halftime lead. This supposed strategy isn’t necessarily a bad thing. If a guy has a career night, you tip your hat and keep it moving. However, this strategy is usually coupled with keeping the opposing team’s main guys in check, and this has been the problem with Houston this postseason.

Steph still went off for 34 in Game 1. Blake Griffin had a triple-double in one of the Rivers games, DeAndre Jordan had a monster 26-17 double-double in the other. Houston has to eliminate the “and” from these games if they want to beat this Warriors team. You can’t have Livingston and Curry. You can’t have Rivers and Jordan. If Houston is going to steal home-court heading back home for Game 3, Game 2 has to be an “or” game. It has to be Steph or Livingston. It has to be Klay Thompson or Andrew Bogut. Remove the “and”, give yourself a better opportunity to win. The Warriors have a lot of guys who can be come the “or” guy, and this isn’t necessarily a problem as long as the Rockets do a relatively good job on defending both Curry and Thompson.

Draymond Green continues to impress. He defended five positions and filled out the box score. He picked his spots to score in the half court and was instrumental to both of the Warriors runs by making plays in transition. Draymond is everything for this basketball team, it’s a joy to watch him play the game of basketball…

…While it was already discussed here, the conversation surrounding Steph Curry’s daughter has largely been misguided. I don’t want to spend a lot of time on this, but it’s worth pointing out that coverage and access has been a big talking point for this whole season. The media wants these athletes to be more human, but only if it’s a convenience. While Curry’s daughter was a bit rambunctious, it was hardly a major distraction. Curry was still able to patiently, and thoughtfully, answer every question asked of him. Considering most reporters I know who have children have brought their children to their respective work places, it feels weird to ask an athlete to stop doing it in their own…

…Lastly, playoff Trevor Ariza showed up last night. Without Ariza, this could have easily turned into one of those patented Warriors “we-get-down-early-but-still-win-by-18” games. Ariza fights through screens better than anyone outside of Tony Allen, and was almost as equally versatile on the defensive end as Draymond. While the presence of Howard is probably the biggest key for a Rockets series win, Ariza might be the most important player the Rockets will need to help shift momentum after those huge Warriors runs that are wont to happen 2-4 times per game.

One Reply to “The Conference Finals Journal: Steph Curry And James Harden Are Fun” 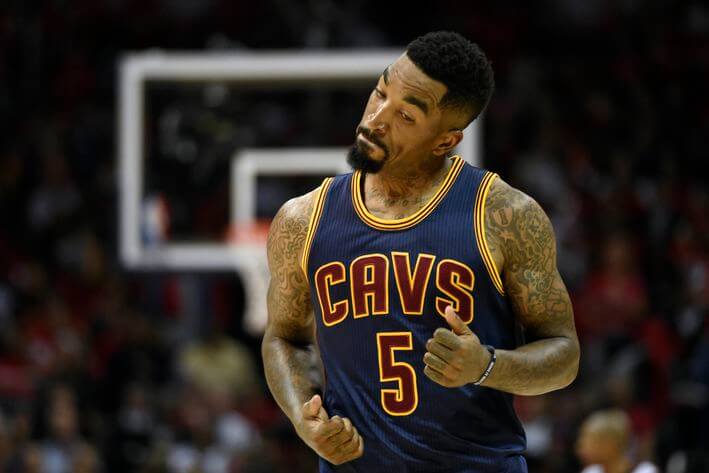 Basketball The Conference Finals Journal: J.R. Smith Is For T… 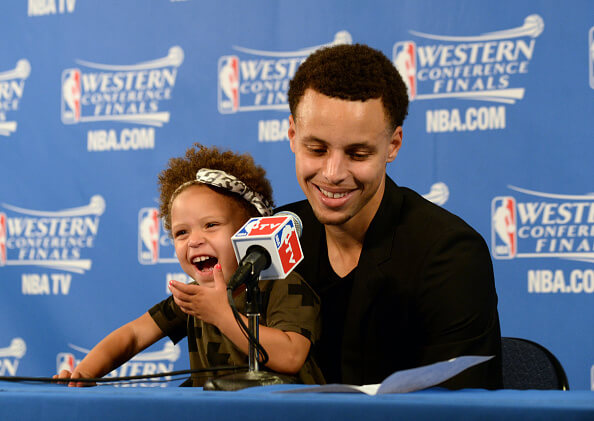 Basketball Cuteness Overload: Enough With The Kids At The Pos…
1