Last week, Chris Paul came through the House of Hoops Foot Locker in Beverly Hills to introduce his new shoe, the CP3.V to the public and fans. There was a line to catch CP3 up close and in person, a line that wrapped around the walls in the Beverly Center outside of Foot Locker. One of the fans, 28-year-old Gabriel Ybarra, waited for five hours just for a chance to catch Chris Paul in the flesh.

“I just wanted to make sure I was able to meet Chris Paul,” said Ybarra. “I’m hoping I’ll be able to ask how he likes playing in Los Angeles, and I just hope he can take us to the playoffs.”

Among those who showed up for Paul’s release were famed Clippers fan, Clipper Darrell and comedian Cedric the Entertainer, who hosted a Q&A session with Paul to launch the shoe.

“He’s just a quality individual and an amazing talent,” said Cedric on CP3. “I’ve been down with Brand Jordan for many years, so when they called me to come out it was a no-brainer. I’m just glad I was the one to be here to come help launch the new shoe.”

Like almost any event in Los Angeles, there were some Lakers fans who showed up. One asked Chris Paul who was going to guard Kobe. Another won a pair of Paul’s new shoes, and walked up the stage wearing Kobe’s shoes.

“I don’t know what size you wear,” started Paul to the kid wearing KB’s shoes. “But you’re going to have to get those Kobe’s off your feet as soon as possible.”

The event was lively, jokes were told, trash was talked and shoes were discussed. It was a cool event overall, with three guys winning autographed shoes, and a few others got their shirts autographed.

For more, check out the photos and video.

VIDEO: Chris Paul, Cedric The Entertainer and Clippers Fans Shut Down the House of Hoops in L.A.

by Phillip Barnett time to read: 1 min
Ed The Sports Fan Derrick Rose Loves His Mama. Adidas Presents the a… 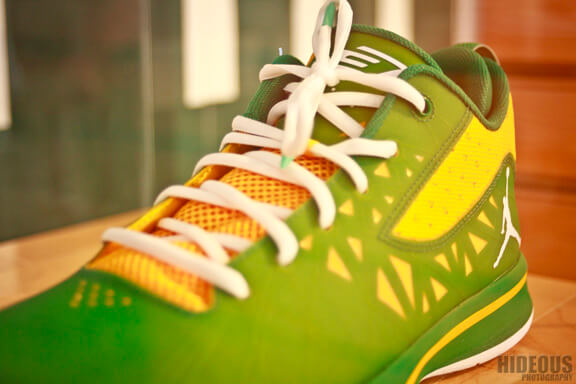