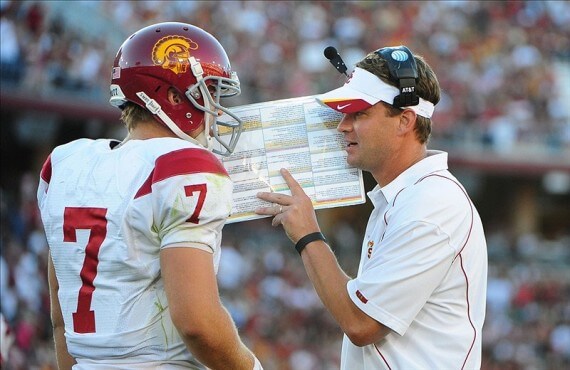 This is kind of a weird season to have a perspective on Southern Cal. Before even playing a game, the narrative about this team has about 304 backstories that link a Heisman hopeful, a high-powered offense and a championship contender to scandal, vacated wins and championships, one shady coach being replaced with a more shady coach and a ban from postseason play in the past two years.

This year, Lane Kiffin (the more shady coach) will not just try to lead USC to its first bowl game since 2009 (I don’t even know what an Emerald Bowl is) to the top of college football in only the first year back from the ban on postseason play that forced Pete Carroll out and made things just flat-out weird when we realized we couldn’t defend Reggie Bush anymore. The first year was really tough with the loss of scholarships and two very good Pac-10 teams in the conference (they still beat UCLA though!). Last season, the Trojans made tremendous improvements despite that strange loss to Arizona St. They went blow-for-blow with Stanford and eventually lost by three in triple overtime and then did the same with Oregon and came out on top at the end of regulation.

This year, USC hopes to pick up where it left off last year and not have some of its historic struggles against lesser teams and shoot for a stage it hasn’t seen since the 2004-2005 season. On paper, this team surely looks capable, but whether or not Kiffin, Matt Barkley and the defense can put everything together at the right times remains to be seen.

The Good: This might be the best USC offense since 2004.

Let’s get the obvious out of the way: Matt Barkley deciding to stay another year in Sunny Southern Cal is a huge deal. Barkley is arguably the best quarterback going into this college football season and has improved dramatically from his freshman year with his ability to go through his progressions, stay comfortable in the pocket and make the right decisions. We can only assume that, going into this season, he’s improved more in these areas and has all the talent in the world around him to lead what could be the nation’s best offense.

With every great offense, the quarterback is only a part of the equation — and finding a solution for all of Lane Kiffin’s weapons will cause problems for opposing defenses. Off top, Barkley has two dynamic weapons at the WR position in Robert Woods and Marquise Lee, who Kirk Herbstreit said is the best receiver in all of college football. While it’s hard to agree at this point considering Robert Woods set Pac-12 records for receiving last year nursing a shoulder injury while on a bum ankle, Lee has all the right tools, size and athleticism to be an exhilarating deep threat at the next level. Debating who is better is less important than the fact that this debate is happening between two guys on the same team.

In the backfield, the Trojans are bringing back Curtis McNeal, who got off to a slow start last season (as much of the offense did) but really picked things up as the season progressed and finished the season with 1,005 rushing yards and 100+ games in four of the final six games of the season including that epic game against Stanford, Notre Dame and UCLA. McNeal showed up during the Trojan’s biggest games, which bodes well for his continued success into this next season. However, the biggest story is undoubtedly Lane Kiffin going after Penn State’s Silas Redd and bringing him to Southern Cal for some much needed depth at tailback, and let’s face it, another dynamic guy who is going to be instrumental in getting USC back on the National Title Stage. The circumstances in which Redd was able to join USC are tragic and unfortunate for those who are fans of the Nittany Lions — and really for folks all across the nation, football fans or not. Although I haven’t seen much of Redd on the field, I know he’s a dynamic athlete who’ll fit right in with Kiffin’s offense.

The biggest issue coming into this season is on the defensive side of the ball, especially up front on the defensive line. As much love as the Trojans have gotten on the offensive side of the ball over the past decade and a half, it’s always been the defense that has fueled the most successful USC squads. This year won’t see the likes of Sedrick Ellis, Everson Griffen, Shaun Cody, Mike Patterson or Fili Moala, just to name a few. This year’s D-Line only has two guys with starting experience (Wes Horton and George Uko) to go along with a bevy of youth and injuries. Horton has been on and off the field throughout training camp because of injuries, J.R. Tavai has been banged up, Devon Kennard has a pectoral injury that could cost him the season and DeVante Wilson is definitely out for the season.

The silver lining is that the seven positions behind that D-Line are experienced, have depth and will be fine throughout the season. In the team’s second scrimmage, the defense really dominated, picking off USC QBs four times and recovering a fumble. These revelations are promising considering the firepower on the offensive side of the ball, but with games against teams like Oregon with its complicated running schemes and mobile quarterbacks, the front four are going to have to be able to perform if USC is going to successfully stop the likes of Stanford (still a very good team), Cal (the Bears always have speed) and Oregon (the team most likely to keep USC from a Pac-12 title).

The Ugly: Lane Kiffin is …

Lane Kiffin is now in his third high-profile job in the last five years (Oakland Raiders and the University of Tennessee before) and didn’t leave either team on the greatest of terms — on or off the field. I’ll spare you the details, but Kiffin wasn’t my ideal choice to take over for Pete Carroll at Southern Cal, especially considering he really hadn’t done anything in Oakland or Tennessee to prove that he was ready to be a head coach of a football team. Considering Kiffin’s past, it wouldn’t necessarily be shocking if this season didn’t really live up to expectations and something crazy happened.

Furthermore, considering USC’s recent history, something crazy could happen to the “University of Sexual Ballers” despite Kiffin. We’ve seen wins, championships and Heisman Trophies vacated because of off-the-field issues. And on the field, USC has shot themselves in the foot more than once when the Trojans could have walked into national championship games (2006 at UCLA, 2007 v. Stanford and 2008 at Oregon St. all come to mind immediately). Despite this current team’s talent (and there is a lot of it), I’ve seen things take a wrong turn way too many times with the Trojans for me to just give them the Pac-12 title, much less have visions of them holding up the crystal football in January. The potential for great things to happen in Southern Cal is there, that’s undeniable, but danger always seems to be lurking in the heart of Los Angeles when it comes to the boys from Troy.