The sheer idea of Serena Williams completing the calendar slam felt like an afterthought in every waking moment I had that she was not playing tennis. In my mind, she won the U.S. Open before the tournament even began. That’s the thing with ideas, though, once planted in the mind, they grow like a coral reef. Expansive and gorgeous in their intricacy, they’re host to so much life. We get caught up so much in the beauty of it all we don’t recognize the death happening all around it. More than almost any other thing in nature, for coral reefs, death is happening in and of itself. The sheer size masks the harsh realities, the flaws, the fatigue of existing for decades upon decades.

Williams didn’t necessarily die in New York, but an idea did. You can spend so many hours fishing in that reef, looking for something to take home, fillet and cook. You get sustained by your belief; the tangibility is concrete, but it has yet to take form in the natural world. The way in which you can mold it are endless, and that’s exactly why they play the matches. Nothing is a sure thing, not even when the greatest ever is opposite an unranked opponent.

No sport is more perpetually ominous than tennis, and I lost sight of that despite watching nearly every point Williams played the whole tournament. 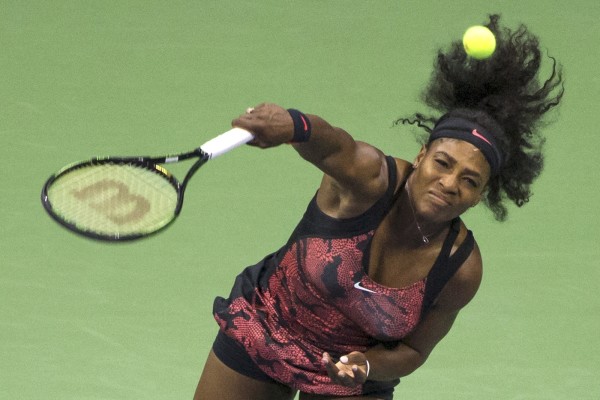 Williams lost the first set of a Grand Slam match seven times heading into the U.S. Open, and all seven times she found a new way to win the match. In the U.S. Open, she did it again in the 3rd round against Bethanie Mattek-Sands. Even in the second set, it didn’t seem like a foregone conclusion that Williams would find a way to take the set. Tied at 5-5 in the 2nd, Williams finally broke Mattek-Sands and closed out the third set by winning all six games.

Before this year, Williams didn’t possess this kind of resiliency. In Grand Slam matches before her 2015 season, Williams came back from losing the first set only 46 percent of the time. This is a part of the reason many believed she was unbeatable. Maria Sharapova, No. 3 in the world withdrew from the tournament days before it began. No. 2 in the world, SImona Halep, was upset in the semi-finals just minutes before Williams would see the same fate. And then there was Victoria Azarenka, who, when healthy, plays Williams as tough as anyone on the tour, fell in the quarters.

Even if Williams were to find herself in a tight spot, her biggest rivals weren’t in line to take advantage. History felt inevitable, and Williams would accomplish what hundreds upon hundreds of individual women and men and doubles partners set out to do in hundreds upon hundreds of individual tournaments. Because the 27 years since Steffi Graf completed the Grand Slam saw 27 different women, men and doubles partners begin temporary runs for the improbable, and 27 different times that run would not be as close as Williams was this season. 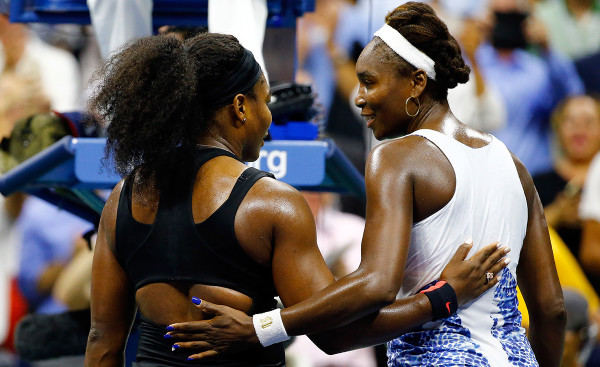 Before reaching the semifinals, Serena Williams faced consecutive opponents of black descent. The first was Madison Keys, who is ostensibly a prototype of Williams herself. Keys has a huge serve and the most powerful stroke game on the tour. Keys began turning heads in 2009 and entered the national conversation this year at the Australian Open. Keys beat Venus Williams in the quarterfinal and lost a well-played match to Serena in straight sets in the semis. Following the match, Serena would say, “It was an honor for me to play someone who will be the No. 1 in the future.” The result in the U.S. Open was no different. Keys had her moments, but Serena would ultimately win in straight sets.

Following the match with the future world No. 1, Serena faced a former world No. 1 in her sister Venus. Watching them compete is a strange dynamic, watching Venus force a deciding 3rd set with Serena’s quest on the line felt a little off beat, but we all kept jamming. While this match was one of the most fascinating storylines in their long history of competing against one another, it’ll likely go down as just a footnote in the polyvalent history the sisters contributed to the game of tennis.

Culturally, there are more women of color doing phenomenal things with their racket. Look no further than the young Keys, who attributes her love for tennis to watching Venus play in Wimbledon when she was four years old. Then there is Sloane Stephens whose game has hints of both sisters. Everyone else in the game has been forced to deal with, adjust to, and adopt the power game that Serena has found so much success with.

Financially, women get paid equal to what the men earn due in large part to Venus’ contributions off the court. 18-year-old Venus, after her first round Wimbledon match in 1998 said she believed women should receive pay equal to their male counterparts. That’s essentially when the fight began, and it would continue for the next nine years, as Venus would speak at myriad board meetings and write an op-ed in the London Times fighting for equal pay in the sport.

The ways in which Serena and Venus changed the sport are immeasurable — but the culture of tennis still doesn’t allow for the full breadth of human emotion. And despite the taboo that is anything other than the status quo, the biggest appeal for Serena is that she doesn’t pigeonhole her humanity, she doesn’t put any part of her identity on a shelf. She’s unapologetic about her blackness in a culture that is unapologetic about its professed resistance to change in the existing state of social affairs. Serena didn’t just open the tennis doors for young black athletes but is paving a road in which it is okay to be themselves. By the end of Serena’s career, Keys and Stephens will have their own place in the sport and won’t have to fight as hard for their own realities. Until then, they’ll continue to have to fight Serena, though. 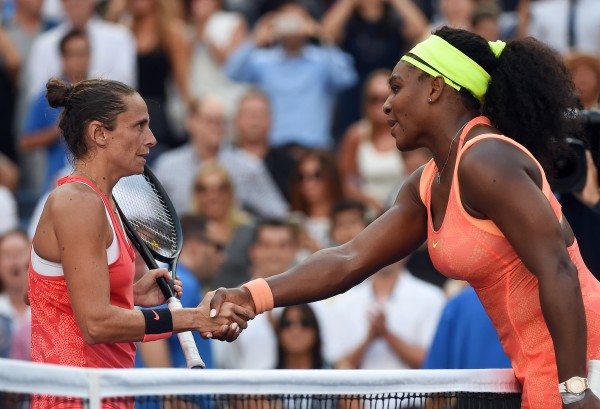 Serena Williams did not complete the calendar slam, this much we know. She lost a three-set match to Roberta Vinci, one in which she seemingly had full control of after winning the first set convincingly at 6-2. Things turned in the second set. Forehands sailed wide, backhands found the net, and the serve lost its consistency. It was the net game, however, that, depending on your perspective, either lost the match for Serena or won the match for Vinci.

Both women had their respective opportunities at the net, but Vinci’s propensity for sending lobs over Williams’ head juxtaposed against Serena trying to power every shot by Vinci proved to be the difference. For every Serena winner, there was an unforced error, either due to Vinci playing the angles at the net or forcing Williams to hit more shots when returning from the baseline. To simplify things, Vinci kept the ball in play when she got a racket on it, increased the number of shots Williams had to make, increasing the likelihood that she would miss.

Vinci needed a game plan, and the game plan was simple. If she were to lose, it would not come at her own hands. Vinci hit 40 percent fewer winners in the match but had 50 percent fewer unforced errors. Serena won more points, served for a higher percentage, won a higher percentage of first serve points and still lost because Vinci didn’t beat herself, and strangely enough, that was enough to win.

With every winner, there’s a loser — and this was a tough loss to stomach. The weight of the world was on her shoulders because she’s strong enough to carry it. But when that weight becomes too much of a burden, and the pressure is so much that it proves too difficult for the most capable, it takes a little out of your ability to dream bigger.

But there’s always next season for her 22nd Grand Slam, she already locked up the World No. 1 ranking for the rest of the year, and is still heads and heels ahead of the rest of the field. You look around and realize that Williams is still better at what she does that nearly everyone else at their respective jobs, and suddenly, the whole thing became possible again. On the surface, her heart broke and shattered into a million tiny little pieces, but it’s not broken forever. Instead, it becomes a temporary jigsaw, and putting the puzzle together develops our emotional intelligence in the same way that physical puzzles enhance our cognitive operators.

And even though she didn’t win this tournament, we should look at her U.S. Open in a benevolent way. Let’s take note of the faults. The missed forehand winners, the backhands blasted into the net. Also take note of the frustration of those misses, the anger that grew out of those frustrations, and the attitude that grew out of the anger. Take note of all of it, but let’s remember the magic of the run, the joy of the wins, and the dominance of a season that almost was, but ultimately wasn’t.

Remember that she’s changed the game like no one before, and likely no one ever. And remember that even as a coral reef is dying, it’s simultaneously playing host for new life, new beginnings, and a future that promises more beauty through intricacy despite the flaws and fatigue. So maybe the idea hasn’t died, just shelved for another season.

3 Replies to “Serena's Quest Dies In Semis, But The Dream Is Still Alive”