Madison Bumgarner probably isn’t a real person — at least that’s what the kids will think when I’m in my mid-70s complaining about the robot umpires ruining the baseball that I used to love when I was a young man.

“We used to watch these things called animated GIFs,” I’d begin via hologram chat with my future grandchildren who are too busy to teleport to come see me in person. “And every time he’d hit a home run, Giants Twitter would tweet a GIF of him chopping down a tree."

“We learned about Twitter in my fourth-period history class,” Phillip the 6th will undoubtedly say. Barnetts sure do love history. “Did people really use their hands to send messages when you were a kid?"

"When I was a kid, we didn’t even have a computer in our apartment.”

/confusion on the other end

“An apartment is like your home pod but bigger, and your whole family lived in it. But that’s for another day. Bumgarner would throw nine-inning shutouts and hit homers and shoot snot rockets out of his nose and become a playoff hero several times over. He bought his wife a cow for their wedding anniversary once. He was the best.”

“You kids are always asking the wrong questions,” I’d say before turning off my iHologram and dusting off my DVD player.

"It’s been years since I watched these,” I’ll mumble to my living-assistance robot named Mildred. I’ll pop it in and watch all of Madison Bumgarner’s 2015 home runs.

Thank god it’s not 2061 yet. I’m not ready for robots, but I’m always ready for Madison Bumgarner, who hit the 10th home run of his career on Sunday afternoon and his fourth of the season. After starting the year in a 1-for-17 slump, Bumgarner has hit one home run every month since May, all four of them at home and all four of them at least 370 feet.

Bumgarner takes pride in his bat. Toward the beginning of the season, Max Scherzer suggested that pitchers are at the plate swinging newspapers when asked about the NL not having a DH like the American League he pitched in before this year. Bumgarner fired back saying, "Oh, well, my wet newspaper is 34 ½ inches, 33 ½ ounces, and I’m waiting on some new ones right now."

On Sunday, Bumgarner showed that he can control the outcome of games with both his arm and his bat. He pitched a nine-inning shutout with 14 strikeouts out the mound while adding a double and a home run at the plate. Here, we rank Bumgarner’s best jacks of the season, because who doesn’t love Pitchers Who Rake?

This is easily the most impressive home run Bumgarner hit this season. He was struggling at the plate as pitchers are wont to do, and Clayton Kershaw was on the mound in the middle of a 0-0 pitchers duel. On a 0-0 count with two outs, Bumgarner blasted the first pitch he saw into the left-field seats. It was his first homer of the season and the first one Kershaw had given up to a pitcher in his career.

It’s rare when you get the Kershaw diarrhea face, even more rare at AT&T Park (Kershaw had a sub-1.00 ERA in San Francisco heading into the 2015 season). 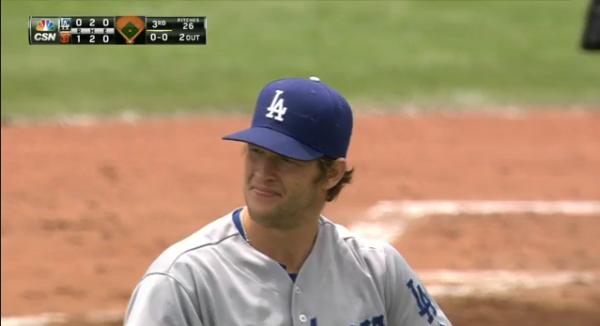 This gets the slight nod over our third spot because it was the climax of an already compelling story. We discussed this already, but Bumgarner was fantastic on the day. He completely stifled the Nationals' lineup and was equally as good with his wet newspaper in his hand. Watch Bumgarner right after he makes contact. He doesn’t really pimp the home run like Zack Greinke does, but you could tell by the way he set his bat down that he knew it was gone as soon as the ball left his bat.

Here’s another home run that had a huge impact on the outcome of the game (the Giants are 4-0 in games that Bumgarner goes yard, by the way). In a 2-1 victory, Bumgarner’s third-inning home run proved to be the difference in the win over their cross-town rivals. This may have been the only one that Bumgarner was in doubt about, as it was the only one he didn’t pull right down the line. The fences are a bit deeper in left-center field than they are in straightaway left, but he still managed to sit this one four rows back.

There is no shame in being last place in a list of pitcher home runs, mainly because it’s still a pitcher going yard and it’s still impressive as hell. Bumgarner's jack off of Christian Bergman was a beauty, and he got to admire it with bothNick Hundley (catcher) and Greg Gibson (umpire). They all kind of just stared as the ball made its parabolic arc toward the left-field tunnel. 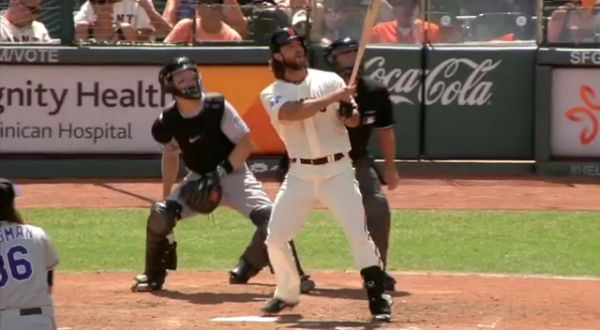