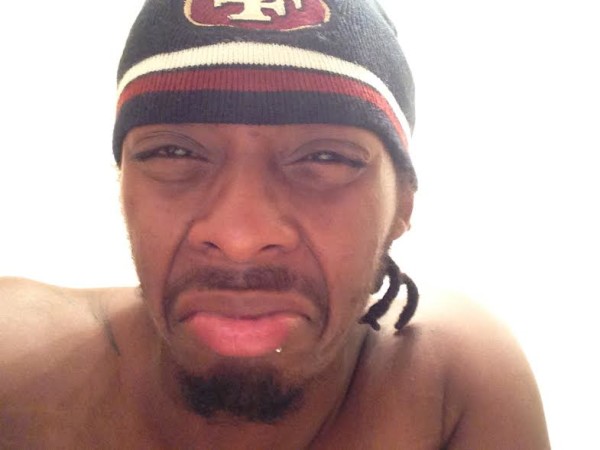 "Do Raiders players even have mothers?" asks Dhevin Williams with a laugh during a brief post-interview chat about the NFL at large.

Williams, a lifelong San Francisco 49ers fan, will tell you he hates the Raiders more than any other divisional foe, mainly because of the fans. To understand this, you have to understand where Williams is from.

California is a huge breeding ground for elite-level athletes and home to some of the nation's best football programs. While Texas is widely regarded as the hotbed of high school football, California boasts a team with the longest win streak in high school football history, De La Salle, and the school that has sent more players to the NFL than any other high school in the country, Long Beach Poly.

These schools are located in the regions of the state that most of the country are familiar with: the San Francisco Bay area and the greater Los Angeles area, respectably. Less known, however, is the Central Valley, a region of California that essentially stretches from Bakersfield to Fresno, where Williams has spent his entire life.

Tulare is a tiny town in a huge state — one that isn't even known by those in the bigger cities. The population of about 60,000 boasts a wildly different culture than the liberal neighbors to the north and south and is literally right in the middle of the Central Valley. The area is home to the nation's largest agricultural region and huge oil fields. It's also home to some of the biggest football fans in the state.

Tulare, lodged between San Francisco, 230 miles to the north, and Los Angeles, 175 miles to the south, is essentially divided between Raiders and 49ers fans — and it was a decision that was made for Williams at a young age.

"I remember growing up just watching a lot of 49ers games with my uncle," says Williams, and since childhood his support has never wavered. 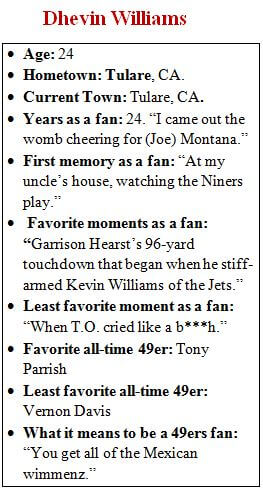 During the course of the NFL's history, the 49ers have experienced successes that some other organizations will likely never realize. But like most other franchises, San Francisco has seen some very deep lows. There were the Tim Rattay and early Alex Smith eras that saw the team fluctuate between two and five wins for eight seasons.

"This is when my trash talking started to get on point," begins Williams on watching a struggling football team. "It was funny though, I'll tell you that. The 2-14 season was tragic, but we passed that torch onto the Raiders so it's all good."

The tides have changed for San Francisco over the last few years, and although Williams still isn't the biggest Colin Kaepernick fan among those who love the 49ers, he still feels this is a team that will win 11 to 12 games this season and the Super Bowl. He says, with a laugh, watching the team these last few years is akin to "leaving an angel in the freezer for eight years, then taking it out and letting it blow on your neck."

More than anything else, Williams lives and breathes football. He played safety and linebacker in high school and has played semi-pro ball since then. Williams has also gone back and coached linebackers and defensive back at his alma mater, Tulare Union High School.

Despite Tulare's inherently low-volume talent pool, TUHS is home to four current NFL players, three of whom Williams played with while in school. Zac Diles, who graduated from TUHS before he attended Kansas State, was signed by the Cleveland Browns this offseason. Virgil Green of the Broncos, Bryce Harris of the Saints and Marquess Wilson of the Bears all hail from Tulare High.

When not rooting for the 49ers, Williams spends an inordinate amount of time thinking about Cam Newton, his favorite player not in The Bay, and why the 49ers didn't take Aaron Rodgers over Alex Smith. Should the 49ers win the Super Bowl this coming season, Williams fully intends on being the most insufferable human being on earth.

One Reply to “Meet The Fan: Dhevin Williams Puts His Humor, Trash Talk Behind The San Francisco 49ers”