Spacing is a puzzle.

In any given half-court set, there are 10 guys within the confines of a 47-x-50-square-foot space fighting to either create or prevent the best possible shot within a time slot that lasts 24 seconds. More often than not, the Oklahoma City Thunder is able to solve the puzzle relatively easily. Isolate the best scorer in the league and let him work, or run a high screen-and-roll set with one of the five most athletically gifted ballplayers and let him work.

It took a few games, but the Los Angeles Clippers are starting to make that puzzle a little more complicated. A lot of attention was given to Chris Paul defending Kevin Durant in the fourth quarter of Game 4, but the double teams the coterie of Los Angeles defenders sent at Durant was the real story. 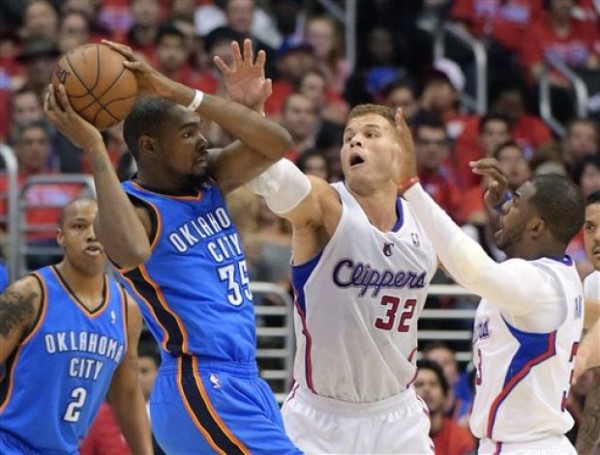 Doc Rivers only really double-teamed Durant in two situations — wing P&R sets with Durant as the ball handler or as the go option. The Clippers sent hard traps from the secondary defender when Durant was handling the ball or a hard trap from the backside defender from the baseline when he received the pass. They made Durant uncomfortable by disrupting the spacing that had been afforded to him in previous games.

The result? Durant had eight of the Thunder's 16 turnovers. The Clippers' other three defenders were able to jump into passing lanes or leak out for fast-break buckets. What’s troubling here isn’t that Scott Brooks still hasn’t learned when to use Durant as a decoy to get others involved, but it's that there wasn’t a single in-game adjustment. The puzzle has changed, but the Thunder are still putting new parts in old places. They have two options: Figure it out now, or figure it out over the summer.

Related: The unsurprising parts of the Clippers' comeback against the Thunder (SB Nation)

3 Replies to “The 300: Oklahoma City Struggles To Solve The Ever-Changing Spacing Puzzle”