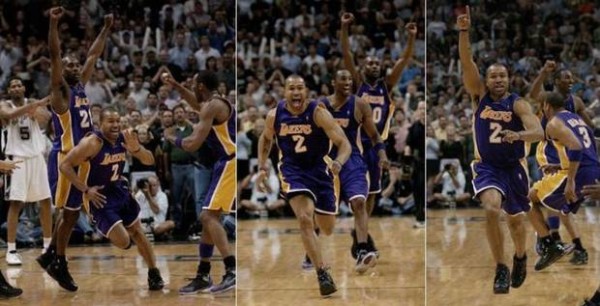 When his shot fell through the net, he was on the ground a few feet behind the three-point arc. Shaq guarded him beautifully, especially for a guy who wasn’t accustomed to defending 17-feet away from the basket.

Karl Malone came over on a double team as soon as Duncan made his second dribble toward the middle of the floor. It wasn’t a bad double team, but he did get there maybe a half second late. The ball was being released from Tim Duncan’s hands as Malone began his contest.

Duncan may or may not have been excited, but the AT&T Center exploded. That was the dagger that would, for all intents and purposes, end the Lakers season. 73-72, Spurs -- 0.4 seconds left to play. With his teammates draped all over him, Duncan stood there, face as stoic as its ever been.

While the guys are celebrating, Gregg Popovic and P.J. Carlisimo hoverd over the grease board, the job wasn’t done yet.

Gary Payton was tasked with getting the ball in. The 1st option, Kobe, pops out beyond the perimeter and Robert Horry follows. You allow anyone to beat you in this situation, anyone except Kobe.

Horry following allowed for a void only large enough for a Fish, and a Fish filled that void. Payton put the pass in the only place it could be. Fish let it go.

In less than half a second, the Lakers season went from the verge of disaster (they’d face full blown disaster later that year) to the brink of their fourth Finals trip in five seasons.

He sprinted out of the arena, one finger in the air, all the rods in the world wouldn’t have caught that Fish.

That was 10 years ago today. It still feels like yesterday.