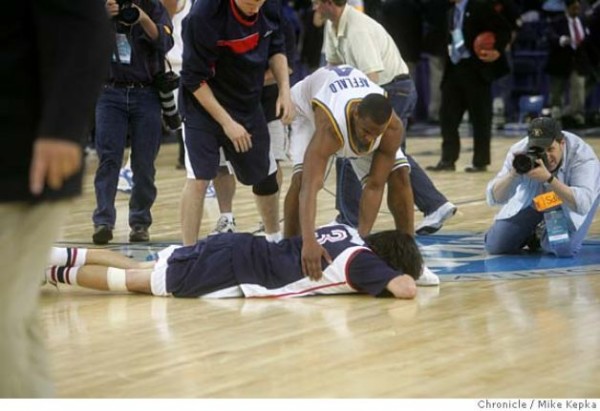 Watching the Gonzaga-UCLA Sweet 16 match-up was akin to watching Mufasa fall to his death in the Lion King. It looked bad, but you didn’t expect Adam Morrison to lay at halfcourt with tears in his eyes urging his boys:

"You gotta get up, we gotta go home."

UCLA were grazing wildebeests in the first half against the Zags, allowing the pride to roam freely as the Bruins amassed a 17-point lead.

Ben Howland, a point guard scavenger, was the conjectural hyena to get the herd to stampede and cut away at the lead. Even with 40 seconds left, the ball and a three-point lead, Gonzaga was essentially the Simba to UCLA’s Scar, thinking they had a surprise trip to the Elite 8.

Instead, a missed jumper, a foul and a turnover put Gonzaga in danger — a go-ahead bucket from freshman Luc Richard Mbah a Moute became the claws that let Mufasa fall to a disheartening end.

All of this was narrated by Gus Johnson.