It’s one way or the other with the New England Patriots. Love them or hate them.

This Sunday, the Patriots will take the field against the Los Angeles Rams for their third consecutive appearance in the Super Bowl. You know the important parts of this team if you’re interested in football. It’s very easy to dislike this team, if that’s what you want. But if you look a little closer, you just might find something that you like.

The head coach of the Patriots, Belichick is the consistent staple on the sidelines. His tenure is long and fruitful — five-time Super Bowl champion as a head coach with the Patriots (plus two more as a defensive coordinator for the Giants), .732 winning percentage in the postseason and one of the greatest coaches in the history of the NFL.

You can see him as a caricature, the joyless, stone-faced grump who trods up and down the sideline. The game is a business to him, an emotionless series of transactions. Most of the players on the field are expendable, exchanged and shipped out for what seems like a neverending stream of second-round draft picks. When a massive nor’easter had Boston under a foot of snow and up to two feet of flooding, Belichick reminded his players not to be late for practice. He took joy in giving them no days off, and tried to start a super awkward chant about it after one of their Super Bowl wins. If that’s not enough, there’s the cheating scandal. Wait… scandals.

You can see him that way if you like. You can also try to find the funny in it and enjoy Belichick for the sourpuss he is. Laugh at him when he’s telling a referee off. When the rest of the sideline is moved to elation, imagine that Belichick is deeply uncomfortable with all this emotion and wants to get back to the accounting game of football. Or, imagine him being so much more than you see on the sidelines — a joker who likes to listen to the butt-stupid pranks of the Jerky Boys in the confines of his office. And laugh at the hoodie. Always laugh at the hoodie.

Man, oh man. Brady himself might be more divisive than the rest of the team. He took over for an internally bleeding Drew Bledsoe in 2001 and stole his job, winning five Super Bowls in the process. He’s the winningest quarterback ever.

And he’s a jerk. When something doesn’t go his way, he yells at referees, teammates and coaches. He’s an Uggs model. He’s a cheater too. And you can choose to like him or dislike him because of the hat he kept in his locker.

But jerks tend to be really good, which Brady is. If you think about it, Brady’s success as a quarterback is pretty remarkable for a 6th-round draft pick. And that goes double with the revolving door of receivers he’s been working with his career, featuring an assortment of short, sneaky-athletic wide receivers. Brady did give us some of the greatest Randy Moss seasons ever too. o/

Rob Gronkowski is probably the most likable Patriot. It’s fun to imagine Belichick having to tolerate his party-going, bear-sized tight end in Gronkowski because he’s so good on the field. Gronk led the league in touchdowns in 2011, but also led in interviews regarding his favorite number this season. Not a good look, Gronk.

Julian Edelman is second in postseason receptions to Jerry Rice. For some, that means he should be in the Pro Football Hall of Fame, which is a wild thought.

Sony Michel is a fun running back to watch. Notice anything different between Michel and all the other players on this list?

If the Patriots are in the Super Bowl, there’s always going to be an inevitable feeling that they’re going to win. You’re free to hate it or love it. My advice? Find some fun in it. That’s what we’re here for.

How To Hate Or Love The Patriots 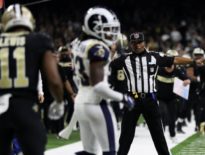