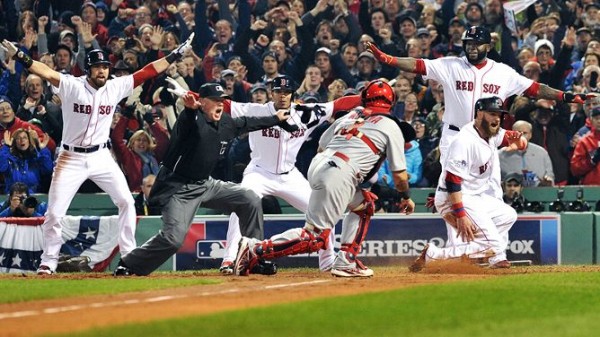 Hope is the most valuable asset we have as human beings. No storm will go on forever. Brighter days are ahead. The idea that something better is out there drives us to get up in the morning. It improves a morning commute on the way to a gig that just isn’t cutting it anymore.

The soul burns with hope. Without it, we are merely zombies and robots left to our own depressions and vices. While we frequently hope, we forget the moment we know we’re damned. For as powerful as hope can be, its exit is equally as hurtful.

At 9:08 p.m. Eastern Standard Time, St. Louis Cardinals fans saw it vanish. Shane Victorino’s three-run triple took whatever hope was left and sent it out the front door. To the fans with redbirds on their caps, he ended the season.

The moment when hope leaves the fan is damning. Only one team can win a title; the other teams have fans who find their moment when the flame is extinguished. Some learn it sooner than later. Others are as unfortunate as Cardinals fans. They learn it in the fourth inning of Game 6 off the bat of a Flyin’ Hawaiian.

Depression notwithstanding, a moment produced itself for the Cardinals. As can be the case for those with hearts ripped out, sport found another way to make it worse. With the bases loaded and two outs, Allen Craig came to bat.

One swing of the bat would’ve cut the Red Sox lead to 6-5. Hope re-entered the equation, if only to taunt the road team’s fans. It sat there, as clear and bright as the yellow bases on Fox’s broadcast. The paths were full of the National League’s best. Here – and only here – could St. Louis create a comeback.

We all think about what it’s like to see our teams win a championship. Cardinals fans had their day not long ago. There’s no doubt they replayed the celebration in their minds during this playoff run. All the imagined pomp and circumstance evaporated with Victorino’s hit.

But here, it came back. Here, the people at the Arch could taste it. Yes, one hit would change things. Another would do even more damage. Suddenly, John Farrell’s trip home from the mound without a pitcher would be seen as Grady Little Part II.

Farrell put Junichi Tazawa in the game after his mound visit – following Matt Holliday’s walk to load the bases. Tazawa threw a pitch to Craig, and the slugger swung. He smacked it hard at first baseman Mike Napoli.

Napoli didn’t catch it on first try.  The moment between his initial contact with the ground ball and the realization that Craig – gimpy and wounded – was running is when hope disappeared for the final time. It was the end of the seventh’s top frame.

It was the end of the season.

Boston went on to win. The champagne from Cardinals fans’ dreams was all over the home clubhouse. That is why sports produces the sensations we could only pray a lover or a promotion could offer. No matter how much hope we have, there’s a tangible hope with sports.

Any Sox fan would’ve been laughed at as soon as he or she mentioned the World Series in April. Hope – perhaps all the season had behind it at the outset – provided enough to make 162 games worth watching. The undying flame burned on, got brighter and eventually set Beantown on fire early Halloween morning.

The St. Louis fans will come back next year. From San Diego to Cleveland, fans will hold on to that hope. Hope doesn’t need rationality when it comes to sports. If you’re in the league, you’ve got a shot.

It’s one thing to lose that hope. It’s an excruciating process, especially when drawn out and teased like it was in Game 6. It’s another thing to get so close to a title and wonder what might’ve been. There are things in life we cannot bounce back from. However, the promise of next season and another spark of hope give fans a short offseason before they’re revitalized.

Sports fans are dedicated and loyal. Win or lose, they love the team they follow. Through thick and thin, the fans are there, cheering and rooting for their bums. Hope makes that possible. And when it leaves – the truest fans can pinpoint the moment.

It’s when the body is evacuated of the heart. Until next time, the mind rationalizes. Slowly, the moment disappears and the heart returns. Soon, the hope begins anew.