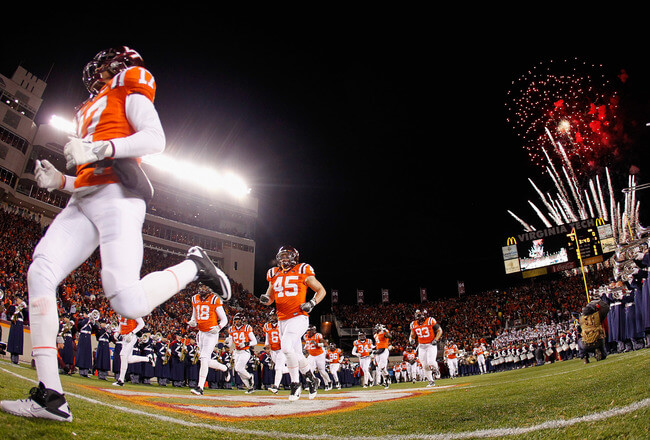 Each time I see the phrase, “The Good, The Bad and The Ugly,” I’m reminded of a shirt that used to be a hot seller in Blacksburg, Va.

The good was obviously represented by the Hokie bird. Bad sat next to West Virginia’s hideous yellow logo. All you have to do to find the ugly is visit Charlottesville.

I wish I owned that delightfully petty and mean item. It said everything holy, except there was no other convenient insult to throw towards Miami. Don’t fret – plenty of shirts were dedicated to that cause.

That first kickoff used to delight me. It’s not the same, but things never are. My alma mater, the school I dreamed of attending since my first dream, will open the season against Alabama. If you listen carefully, the funeral dirges can be heard in Blacksburg from miles away.

There’s no reason to count that game. Tech will get dressed up in the glorious burnt orange and Chicago maroon and end up looking like another cast of clowns sent in at Nick Saban’s behest. Denial is futile. Avoidance is cowardly. The Gobblers will show up, get embarrassed and then embark on an actual schedule of games against normal college football teams.

Still, there will be a moment early in the game when Tech does something worth cheering. The Marching Virginians will strike up “Tech Triumph” and the goosebumps will trickle up and down arms of my fellow fans. I imagine they’ll play like the violinists after hitting the iceberg. Down they go, but by golly they’ll play. I don’t know which will sink quicker.

My diehard dedication died hard somewhere along the way. I have nothing against my school or its football program. They’re my team yesterday, tomorrow and forever. But, I can’t push myself to invest my life in teenagers. That’s my problem, not theirs. It’s not college football’s issue, it’s mine. I’ll root and cheer, but I’ll be okay at the end of the day – win, lose or draw. That is, until bow-tied UVA, coon-skinned WVU or Miami hit the field. I’m not the most prepared writer for this post, but I’ll give some general observations.

Don’t cry for me. Cry for the boys faced with Alabama on Saturday.

How about those brilliantly classic uniforms? The orange and maroon just seem to pop. Tech’s the only school with that color scheme and the recent throwback look makes me giddy. It embodies football – ugly and classic. It screams third-and-short fullback dives. If that doesn’t get you excited, I don’t know what does.

While on the topic of play calls, it bears noting there’s a new offensive coordinator. Scot Loeffler made his way to Lane Stadium after losing his job at Auburn. He held the position for a year that saw the Tigers go 3-9 (0-8 in the SEC) and at the bottom of the only conference’s offensive statistics. Yet, there’s little doubt among Hokie fans that he’s better than Bryan Stinespring, who became a curse word over the years. Last year, he perfected the “Logan Thomas four-yard sneak” play, a staple towards the end of a pathetic season as Tech’s team scratched for a bowl berth at 6-6.

That sounds like a bad thing. I swear, it belonged in the “good” category.

The defense should be okay under Bud Foster’s tutelage. Last year there were disappointments, but the arrival of top cornerback prospect Kendall Fuller provides excitement. Fuller stood out as the best corner at the U.S. Army All-American Game and will hopefully add his name to the list of Tech’s strong college defensive backs.

I don’t watch the depth chart in my free time, but I understand the team has some concerns. For the first time since last season, there’s no real threat at running back. Last year, that rare problem caused problems. Also, the offensive line injuries piled up. If that doesn’t seem bad enough, throw in some unproven wideouts.

There’s an overbearing cloud of angst and curiosity over which Logan Thomas will show up at quarterback. Two years ago, it seemed like he would be one of the top players in the ACC. Last season, he looked as pedestrian as I did when I walked to my philosophy of religion courses in Blacksburg. At least I could bob my head to Talib Kweli’s “Ms. Hill.”

Ugly was an eight-year streak of 10 wins or more snapped. Dreadful as it was, it’s okay to be mediocre sometimes. It makes fans appreciate the good times. Actually, it’s not okay to be mediocre in the ACC’s Coastal Division. The division was created for mediocrity, and here we all thought Tech better than that. Even in the most mediocre of seasons, the Hokies beat UVA. Triumph over the Cavaliers when down provides even more satisfaction in some sick way.

Since the league’s expansion in 2004, Tech rose above the ugly muck around them. Last year proved different. This season’s ugly would be another struggle, capitalized with a terrible bowl game that shouldn’t exist against Rutgers. I refuse to broach the idea of no bowl game at all. Isn’t that a birthright?

Assuming the Tide doesn’t wipe out the entire first string – a large assumption – Tech should be alright this season. They play a pitiful home schedule, which will help pad the win column. It’s hard to say where they end up with no offense, a decent defense and beautiful uniforms.

Even the disconnected can connect with an alma mater. I say they go 8-4. I say they do it for me and the 18 other philosophy grads.