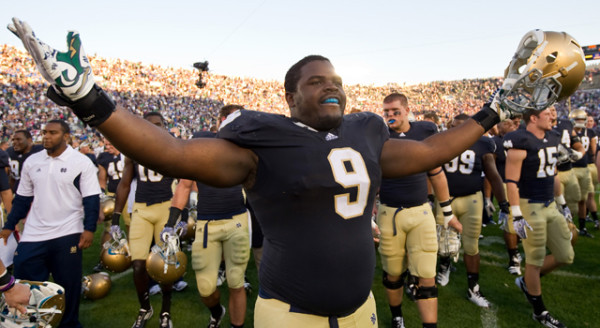 If you were to play a word association game with a large sample college football fans, I would bet that one of the most common responses to “Notre Dame” would be some permutation of “overrated,” “overexposed” or whatever the spoken word equivalent of an eye-roll is. It is a somewhat justifiably common refrain due the mythicism attributed to everything Notre Dame, from The Four Horsemen to winning one for The Gipper to Rudy. The irony of this is that the abject weirdness of what has transpired in the past year for Notre Dame football goes far beyond anything that can be manufactured or embellished by even the most creative of scribes, revisionist historians or screenwriters.

The season started with third-year head coach Brian Kelly handing over the offense to redshirt freshman Everett Golson, with the hope that his athleticism would lead to enough big plays while a rapidly improving defense would cover up for the young QB’s inevitable rookie mistakes. Aided by the depth and consistency of the Irish running game and a handful of fortuitous bounces, the plan worked flawlessly. Notre Dame went undefeated in the regular season and appeared in its first national title game since 1988. Standing in the way was Alabama. The dream season realistically fell apart by the middle of the first quarter of the BCS Championship, as Alabama moved the football at will while throttling Notre Dame’s previously opportunistic offense.

That was just the beginning of the story. Less than a month later, Lennay Kekua became a household name despite not actually existing. Ronaiah improbably became the most famous (and definitely the creepiest) Tuiasosopo brother despite possessing the least athletic ability of the clan. And Notre Dame Athletic Director Jack Swarbrick taught us all about catfishing in one of the most surreal press conferences in the history of mankind sports.

Already shaken by the Manti Te’o catfish extravaganza, the Fighting Irish fan base was temporarily panic-stricken by Kelly’s flirtation with the Philadelphia Eagles' vacant head coaching position. Lest the program feel comfortable with the continuity of Kelly ultimately returning to South Bend, the expulsion of Golson for academic improprieties removed the talented young signal caller from the team for at least the upcoming season.

If the 2012 Notre Dame regular season was a 12-game bender, what took place in the months since qualified as a particularly painful hangover. Consequently, most Irish fans enter 2013 in something between a haze and an outright stupor. 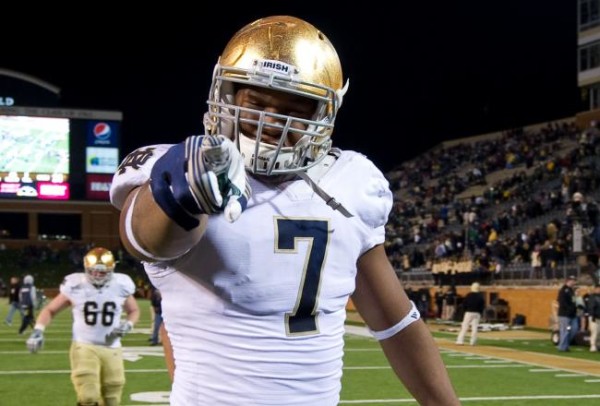 The Good: Notre Dame should again boast one of the toughest and most complete defenses in the country. While a lot of production is lost with Te’o, defensive lineman Kapron Lewis-Moore and safety Zeke Motta leaving for the NFL, the Fighting Irish possess a strong combination of athleticism, skill and experience at all three levels. This unit is also led by one of the most creative and dynamic defensive minds in the nation in Bob Diaco, last year’s Broyles Award winner as the nation’s top assistant coach.

Leadership will come from a pair of returning starters that line up next to each other to form quite possibly the most formidable defensive line in the country: nose guard Louis Nix and defensive end Stephon Tuitt. Last year, both enjoyed production that mirrored their elite pedigrees as effective two-way defenders, possessing an unholy combination of size and athleticism.

Te’o departs for the NFL with one of the most impressive college résumés for a linebacker in recent memory. It is fitting, then, that his production is expected to be largely usurped by freshman Jaylon Smith, the most heralded defensive recruit for Notre Dame since Te’o himself. Smith’s athleticism is expected to be on full display as a sideline-to-sideline run stopper and elite coverage defender.

Last year, the Fighting Irish defense flourished despite an astonishing lack of depth in the secondary; that is not anticipated to be an issue in 2013. The performances of incumbent starters Bennett Jackson, KeiVarae Russell and Matthias Farley ranged between respectable and outstanding last season. Joining them will be a mix of talented players returning from injury (Austin Collinsworth and Lo Wood), young breakout candidates that showed flashes last year (Elijah Shumate) and blue chip recruits (Max Redfield and Cole Luke). Together, this unit boasts depth and athleticism few observers thought was possible at Notre Dame in recent years.

The Bad: For Notre Dame’s 2013 record to even resemble last year’s, the defense will have to fulfill the lofty expectations laid out above, as the offense is rife with question marks heading into the season. With Golson sitting out for at least the next year, the keys to the offense return to the hands of senior Tommy Rees. Casual observers may remember Rees as the poised freshman/turnover machine/noodle arm/benchwarmer/championship-shot-preserving senior quarterback that bailed the Fighting Irish out of several tough spots last year in relief of a hobbled Golson. At this point, anything is possible from being benched by October to performing a reasonable Rick Mirer impersonation if you squint real hard.

Further complicating the outlook for the offense is the tonnage of skill-position talent heading for Sundays. Gone are tailbacks Theo Riddick and Cierre Wood in addition to tight end Tyler Eifert, accounting for almost 3,000 yards from scrimmage combined last season. Kelly and his staff are hoping that several talented but less-than-proven options emerge to pick up the slack.

While the fleet-footed junior George Atkinson III will get an opportunity to shine in the backfield, close observers are most excited about USC transfer Amir Carlisle and a pair of highly recruited freshmen in Greg Bryant and Tarean Folston. Though inexperienced, this group has the talent to make an impact early. In terms of weapons in the passing game, the loss of Eifert should be mitigated somewhat by the continued development of veteran receiver TJ Jones and sophomore DaVaris Daniels, perhaps the only player that had an encouraging performance against Alabama in the title game. The Irish do return a strong offensive line, headlined by left tackle Zack Martin, potentially smoothing out the transition to vastly different set of playmakers.

The Ugly: While not expected to dramatically impact the on-field product in 2013, Notre Dame has undergone a somewhat troubling bout with defections of young talent. Offseason transfers of one-time blue-chip recruits like quarterback Gunner Kiel and receiver Davonte’ Neal have put future depth at these positions at least temporarily in question. This comes on the heels of the 2012 transfer of defensive end Aaron Lynch, the headliner of Notre Dame’s recruiting class a year prior.

The issue does not appear to be limited to players who already have suited up for the Irish. In consecutive recruiting cycles, Notre Dame has had to weather 11th-hour switches from committed recruits like receiver Deontay Greenberry, cornerback Tee Shephard and, most recently, defensive lineman Eddie Vanderdoes, all among the top recruits at their respective positions. The current cycle has already been hampered by the loss of Elijah Hood, universally regarded as one of the top high school running backs in the country.

Every college football program is subject to the whims of teenagers and their inherent right to change their minds, particularly those who commit without having attended a single practice. Moreover, one of the most significant successes of the Brian Kelly era at Notre Dame has been his ability to attract a fairly deep class of top talent to the program seemingly every year. That said, the frequency of these defections and the weightiness of the names attached have grown to a degree that one must wonder if there is an endemic flaw in Notre Dame’s recruiting formula. Given the mercurial nature of recruiting in general and the completely justifiable privacy concerns for the recruits themselves, the root causes can only be speculated upon. Whatever they may be, these factors have the potential for reopening the questions of whether Notre Dame can recruit with the big boys down the road, a refrain that has grown quieter in recent years.

Prediction: The long-term questions about maintaining the talent pipeline aside, Notre Dame’s defense is again strong enough to give the Irish a shot against any of the regular-season opponents on the docket this season. With the amount of turnover on offense and the inevitability of some of the 2012 breaks going the other way, however, it’s unreasonable to expect the Irish to run the table heading into bowl season again. At some point, I expect an uneven performance to doom Notre Dame in a close game. Still, it’s hard to see the Irish lose more than two games given their overall talent. The Fighting Irish will finish the regular season 10-2 (losses to Michigan and Stanford), which will be good enough to play in a BCS bowl game.

2 Replies to “The Good, The Bad And The Ugly: The 2013 Notre Dame Fighting Irish”