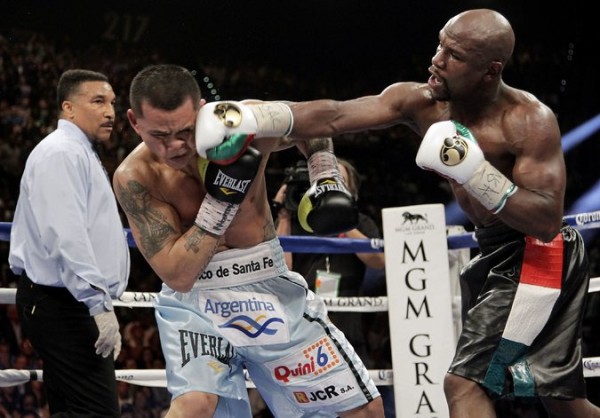 Floyd Mayweather Jr. was in the fight of his life on Saturday night. For 12 rounds, Marcos Maidana accomplished what no man before him has been able to: He bullied the pound-for-pound champion.

Perhaps for the first time ever, Mayweather was not the ring general he’s been with all his previous opponents. With aggressive, come-forward fighters, Mayweather has found a way, usually within four rounds, to redirect his opponents’ pressure and to make them pay for their wild barrages of punches. Against Maidana, that didn’t happen with the same flare or clarity that fans are used to seeing.

From the opening round until the final bell, Maidana was relentless in his attack and steadfast in his game plan. The Argentine slugger came to overwhelm Mayweather by pushing him to the ropes, cutting off the ring to keep him there and then throwing looping punches at any part of Mayweather that was available — aiming for the head, but satisfied with the shoulder, arms and occasionally the groin.

It’s an ugly tactic, one with which Mayweather foes have had success in pockets but have never been able to keep up. Maidana was the exception. Although he took his foot off the gas pedal slightly in the middle rounds, for the most part, Maidana executed his plan of relentless attack as best as its ever been done against Mayweather. For that alone, he deserves great praise and respect in the boxing world.

The shortcoming of the execution, however, is that the onslaught never quite transformed into punishment. CompuBox noted that Maidana hit Mayweather more than any other fighter, but those punches didn’t have the effect they had against Adrien Broner and did not have enough to make Mayweather waver in his usual precision. Mayweather essentially threw half as many punches as Maidana but landed at twice the rate.

That’s something we’re use to seeing from Mayweather. This time around, however, the stats didn’t look the same in action. Against Canelo Alvarez, Mayweather seemed to rock the bigger man’s head more with the right hand, and he put more combinations together that wowed fans with their speed and accuracy. At least one judge agreed, calling this fight a draw, likely believing that even though Mayweather may have landed more, the punches didn’t impress as much as Maidana’s unbridled aggression.

He claims that if he wanted, he could have made the fight boring and out-boxed Maidana all night. Whether this version of Maidana, the one Robert Garcia has finely tuned in Oxnard, can be easily out-boxed remains to be seen. This version of Maidana would pose a serious threat to opponents who previously defeated him — Devon Alexander and Amir Khan. The next time they fight, if there is the next, Mayweather said, the fight would be totally different. Whether that’s possible is reason enough to let the Argentine slugger have a second crack at Mayweather’s chin.

In the post-fight ring interview, Mayweather was almost definitive about granting Maidana a rematch, saying, “If the fans want to see it again, we’ll do it again.” Barely an hour later, Mayweather’s tune wasn’t so clear in the press conference, saying he’s not sure what the next step is.

We know for sure Amir Khan won’t be fighting him in September because of Ramadan. So if not Maidana, who could be on Mayweather’s radar? Perhaps the winner of Miguel Cotto-Sergio Martinez in June? It surely isn’t Shawn Porter, who has a likely date with Kell Brook, or Keith “One Time” Thurman, who has recognized that he is unlikely to face Mayweather this year. Sadly, there’s little chance Mayweather is thinking of Manny Pacquiao, who is in talks to renegotiate his contract with Bob Arum. With all these pieces as they stand, Maidana seems in prime position for another big payday and another opportunity to shock the world.

Basketball Expect More Pressure, Drama And Paranoia In The NB…