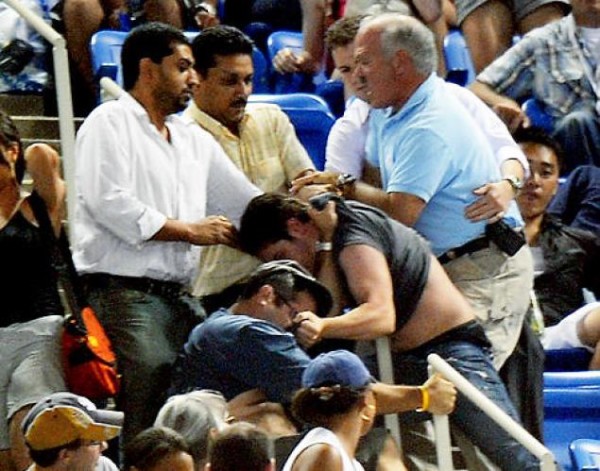 As a sports fan who attends quite a bit of live sporting events, there's something that never ceases to annoy me. And this being The Sports Fan Journal and all, I thought it appropriate to broach the subject here.

The thing that annoys the hell out of me is people who do not sit in the proper seats — you know, the seats on their tickets. Now don't get me wrong. I understand people trying to sneak in to better seats when no one is sitting there, and I understand stretching out or moving around to give yourself a buffer zone when there are unoccupied seats around you. Or if you have friends there and want to sit together and space allows it. That's just common sense.

Then if/when the ticket-holders of said seats show up, you move quickly out of their way and plop your ass in your own seat. Nothing wrong with that.

But I cannot understand and never will people who unwittingly sit in the wrong seats. Can these people not read? Do they not understand the basic premise of numbers and/or letters? And if not, shouldn't they be doing something like learning how to read instead of taking in a sporting event and ruining everyone else's time?

I bring this up because on Monday night, I went to the Wells Fargo Center to watch the Los Angeles Clippers absolutely eviscerate the Philadelphia 76ers with my boy Josh. The two of us secured extremely cheap seats on StubHub, sitting upstairs near midcourt. They were by no means primo seats, other than the fact that they were aligned with the middle of the court.

Yet in this row, we had to get up and down no less than four times as people sitting in the wrong seats log-jammed our aisle multiple times throughout the game. Here I am, trying to enjoy the brilliance of Chris Paul while lamenting the state of my Sixers, and I'm blocked by idiots going in and out to find their proper places. It was annoying as all hell, and I missed at least one or two (most likely horrible) plays because of it. All because a bunch of morons couldn't read their own tickets and sit in their own damn seats.

Maybe I'm just turning into a grumpy old man — after all, I have just over a year left in my 20s. But it seems like such a simple premise to nail down. Read your ticket. Find your section. Then your row. And then your seat. Easy as pie. Too bad so many people are dumber than pie.

Sit in your own damn seats, people! And get off my lawn!

2 Replies to “Fan Gripe: Sit In Your Own Damn Seat”