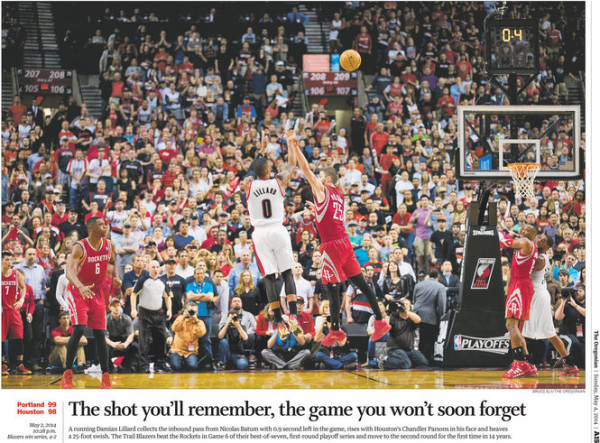 And then there were eight.

Let's run through a brief list of notable moments we've all experienced as a family after just one round of the 2014 NBA playoffs:

1. Four-point plays became the norm. Not only did one seem to happen every night, but they always happened at critical points in the game.

2. Roy Hibbert went two entire games without scoring a single point. A SINGLE POINT. He's 7'2" and was an All-Star this season! Roy's approval rating got so bad he somehow made a 2006 Kwame Brown resemble Bill Russell in retrospect. No, seriously, this happened.

3. America now knows John Wall and Bradley Beal. They also saw Nene baptize the Defensive Player of the Year Joakim Noah, too. But much of America does not know D.C.'s three-piece wings, seasoned fries and everything drowned in mambo sauce are nearly better than sex. There's still work to do.

4. An Oklahoma newspaper called Kevin Durant "unreliable," which somehow zapped the Memphis Grizzlies of all their power.

5. The first round went on so long we all sort of forget the Heat were even in the playoffs. But LeBron James and Michael Jordan dapping was pretty cool. A tad bit emotional for a guy like myself, but I digress. Who am I kidding? I'm still emotional about that. I even began thinking of cool T-shirt designs with the caption, "The Heir Up There." Pathetic, I know.

6. James Harden and the playoffs. Wooo, buddy, I don't want to say this is becoming a trend, so let's move to the next sentence. Dwight Howard was so good against Portland that at times we all had flashbacks to the 2010/11 Dwight. 2011 just happens to be the last time D12 won a playoff series, too. Which brings us to the next statement ...

7. We were a Damian Lillard game-winning three away from six Game 7s.

The NBA may have screwed itself. How? Because how in the hell does round two even come close to what round one gave us? Keep in mind, LaMarcus Aldridge going full-fledged Wilt Chamberlain, Paul Pierce opening and closing Toronto's postseason with heartbreakers, Drake or the SMH-worthy nature that is Mark Jackson's job security weren't mentioned.

It was one of those cluster of weeks where, aside from Sterling-Gate, the NBA couldn't have pegged a better introduction to its second season. The semifinals don't have to live up to the first round. The second round is already chock-full of angles and intrigue in every series that much of America will experience major forms of sleep deprivation in the coming days.

So, yes, now would be a good time to invest in coffee. The guy falling asleep at his desk across the hall from you? He's not doing it because he doesn't give a damn about his job. He was just up until 2:00 a.m. the night before watching an overtime thriller and catching the after hours edition of Inside The NBA. 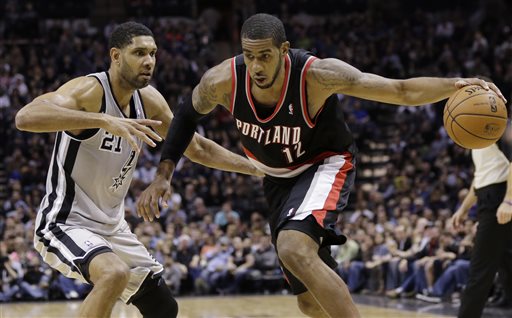 Portland's crazy enough to believe it can beat the Spurs, who apparently have the same condition as Pharrell where they don't age and will probably dominate forever. Lillard has been as exciting as any player in these playoffs thus far, including Durant, James and Blake Griffin. Guys like Nic Batum and Wesley Matthews are fearless. Meanwhile, Aldridge is a load to handle and double-double waiting to happen. Not the 14-10 double-doubles either. More like the 28-13 variety.

But San Antonio's defense isn't Houston's defense. The Spurs' offense is significantly more fluid, too. And San Antonio prides itself on execution, led by Gregg Popovich. In other words, the Trail Blazers are climbing an uphill battle the moment they step off the plane.

But it's not as if the Spurs are invincible either. Dallas took them seven games, and Dirk Nowitzki never truly resembled Dirk Nowtizki. And my buddy Ron brought up an interesting "what if?" scenario. What if Aldridge goes off against Timmy a la Amar'e Stoudemire in 2007? Al If Portland steals Game 1, then the potential for this being a strategic slug fest increases exponentially.

Best-case scenario, this goes all seven with a point guard battle for the ages between Tony Parker and Lillard. Lillard firmly supplants himself as one of the league's finest point guards and one who went toe-to-toe with Parker and lived to tell about it, win or lose. Worst-case scenario, San Antonio gets Portland out of here in four quick games. 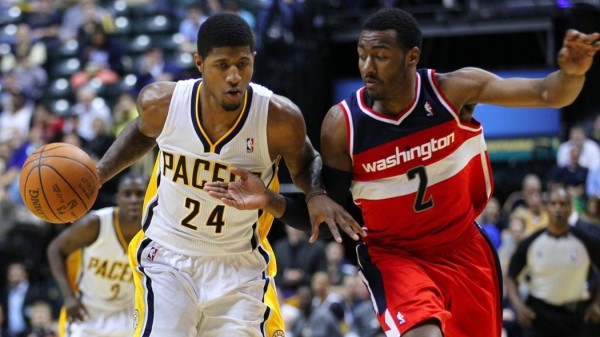 It's tough to call the Wizards "underrated" anymore since so many people are picking them to beat the Pacers. It's easy to understand why, too. Washington is sneaky good defensively. John Wall should devour George Hill at every possible moment. Bradley Beal has "holy sh*t this guy could be the best two guard in the league in a few years if everything falls into plan" written all over him. Trevor Ariza should hound Paul George in ways Atlanta just wasn't able to.

And the combination of Marcin Gortat and Nene isn't exactly the second coming of Rick Mahorn and Bill Laimbeer, but it's tough to see them being intimidated by much. Plus, if Nene gave Joakim Noah the blues, logic states an extra offering must be taken at churches in Indiana to pay for Roy Hibbert's medical bills.

That, however, is why the games are played on hardwood and not WordPress. We watch the Pacers with the thought that at some point these guys have to find their rhythm again. They barely edged by a Hawks team we weren't even sure wanted to be in the playoffs. They've been humbled, and now is when the realization hits them they're the top seed for a reason. Or the Pacers could be who they've been since after the All Star break: a tease of a title contender who struggles scoring at times and have a permanent "we're going to screw this up, aren't we?" face every time the game gets close.

More questions than answers surround the series. Yet, if I was a betting man, put me down for $100 on a David West and Nene double technical in Game 1. 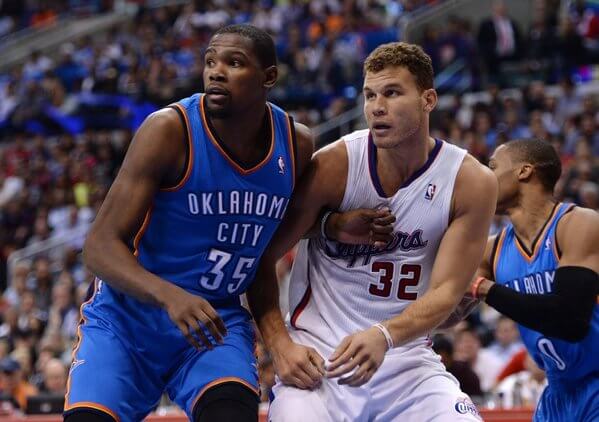 Kevin Durant receives his MVP trophy this week, an honor he earned by proving, yes, nearly 7-foot gazelles are not only beautiful to watch on the Discovery Channel. Redefining the perception of what a great scorer resembles is too.

Sweet baby Jesus are reputations on the line in this series though. Can the combination of Blake Griffin and DeAndre Jordan impose their will on Serge Ibaka and Kendrick Perkins? How long do we have to wait until the inevitable attack on Griffin comes? And will it come from Steven Adams? Is someone going to tell Caron Butler chewing on a straw while playing basketball is extremely dangerous? More over, Thunder fans should hold prayer vigils every hour on the hour because, unless an act of God intervenes, there is absolutely nothing Scott Brooks can do to not get out-coached by Doc Rivers. Of all remaining match-ups, Thunder/Clippers is by far the most lopsided in terms of coaching.

On the other hand, Chris Paul is on the hot seat. His once impenetrable teflon is dilapidated. He won't get traded or anything of that nature, but CP3's four wins away from his first career conference finals appearance. If Paul's the best point guard in basketball, Shakespeare himself couldn't have planned for a better stage.

Then, of course, there's the always-relevant Russell Westbrook/Durant dynamic, which literally changes with every Russy field goal attempt. They're the most polarizing duo of their generation. They're young, but they're old in experience lingo. They've won gold medals together, made All-Star teams together, openly rebelled against Skip Bayless together and saw how much they needed each other during times of separation. Only one accomplishment remains unchecked. 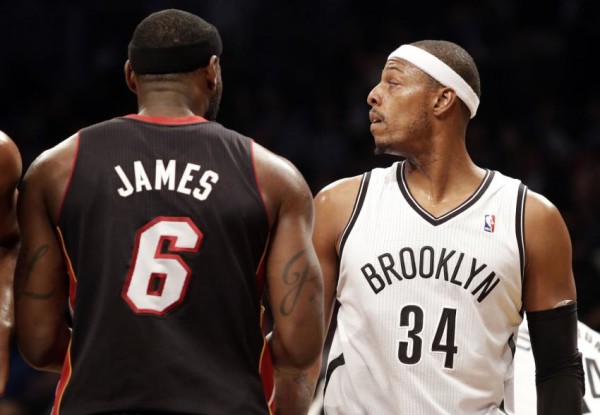 If the basketball gods have any sort of heart, they make this Kevin Garnett's last postseason. Watching KG this year has sucked. He's a shell of his former self, nothing to be a shamed of considering the fact he was drafted the year the original Bad Boys hit theaters. That said, you kind of get the feeling he wanted this match-up. One last shot for him and Paul Pierce to heave one last haymaker to their once former whipping boy, LeBron James.

And you get the feeling LeBron wanted this. James will admit the battles with Pierce and Garnett over the years made him a better player in the long run. They humbled him. Hell, they were part of the reason he moved to Miami. Providing the proverbial nail in the coffin via a dominant showing in 2014? Killing idols and destroying rivals never read so riveting.

The series will define itself by much more than the three names mentioned. Miami must prove it can beat Brooklyn, who took all four meetings this season. Brooklyn must prove it won't rest on a 4-0 clip in the regular season. Marcus Thornton, Mason Plumlee and Shaun Livingston must continue being sparks off the bench. Dwyane Wade just has to stay healthy (easier said than done). The Heat's ability to create fast-break points and nail open threes are back-breakers.

Yet, in the fourth quarter when palms are sweating and every dribble is of vital consequence, it's going to boil down to James and Pierce. Just like it always has. Enjoy it, too. Pretty soon the only place to see the two future Hall of Famers go to battle is YouTube.

3 Replies to “Expect More Pressure, Drama And Paranoia In The NBA Conference Semifinals”