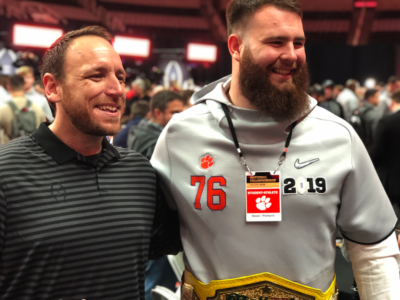 As Clemson and Alabama rolled into Saturday's media day ahead of the College Football Playoff National Championship Game, many questions from the swarms of media milling about the SAP Center floor were expected.

The “How are you feeling about the game,” the “What do you think the difference maker Monday night will be” and the occasional “What did y’all eat at In N’ Out this weekend” questions were customary for the soundbite-hungry media members.

But it was the questions from 6-foot-1 world champion competitive eater Joey Chestnut that broke the football humdrum, infusing the conversation with talk of chicken wings, sliders and perfectly cooked steak.

Chestnut was even recognized, and hailed by Clemson head coach Dabo Swinney. In fact, Clemson president James P. Clements told Chestnut, an engineering major, that if he ever decided to go back for his Masters that there is a spot for him at Clemson University.