We did it you guys – we made it seven-ish long months without a single college football snap. It wasn’t easy; some of us resorted to the AAF, some of us fervently flipped through Baker Mayfield’s Instagram story while others scrolled through their own photos from the National Championship Game, striving to feel the orange and purple confetti on their skin again.

But with the first games about a month away (kudos to the Miami v. Florida scheduling) it’s time to turn our attention to the new season and tackle the toughest questions. So grab some Tito’s on the rocks with water a la Mike Leach and settle in as we take you Hall Over the Place.

Who can upstage Clemson, or more accurately Trevor Lawrence’s hair? 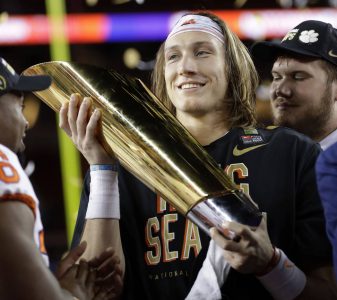 Clemson was quite the put-together package last year, going undefeated and absolutely dominating Notre Dame and Alabama in the College Football Playoff to the tune of 674 yards, six touchdowns and ZERO interceptions. It was impressive, exuberant and looked effortless – just like Trevor Lawrence’s locks. As we move toward the 2019 season, it’s hard to imagine a Lawrence-led team that returns running back Travis Etienne, wide receiver Tee Higgins and center Sean Pollard anything less than formidable, but defensively they will be filling a lot of holes. Plus a sophomore kicker takes over for the departed Greg Huegel. So the 2019 Tigers boast both talent and depth but lack experience, per se.

So who could possibly swindle a Swinney upset? I like Syracuse to do the job. Not only did the Orange upset Clemson in 2017, they also started last season 4-0, which bodes well for the Week 3 bout at home against the Tigers. Syracuse getting Clemson early, while new guys are still finding their ground is key. If they get past ‘Cuse, depending on how the rest of the season shakes out injury-wise and what not, the November 9th game at NC State could be a trap game. Sandwiched between Wofford and Wake Forest, it’s the perfect foil to the Tigers’ potentially undefeated season.

As for Lawrence’s hair – Oregon’s quarterback Justin Herbert is coming in hot this year with a magical mane of his own… plus 3,151 yards and 29 touchdowns from last season.

How will the Pac-12 solve its Playoff Problem?

This offseason (and all of last season really) has not been kind to the Conference of Champions. We have seen Larry Scott scandals, instant-replay incidents and constant questions about where the Pac-12’s money is really being spent and how that translates to the product on the field, court, diamond, etc. The Pac-12 is actually a media company after all, but the Power 5 football conference certainly needs better PR.

One of the ways the Pac-12 is looking to reclaim its relevancy is by exploring earlier start times – we are talking 9AM PT kickoffs, breakfast ball. Per several reporters at Pac-12 Media Day, the conference is actively exploring these early kickoffs as a way to combat their matchups being overlooked by more marquee games. This could be favorable for the Conference of Champions, a way to boost visibility on the opposite coast and might put an end to the old “I’ve never seen him play” reason for not voting for Pac-12 Heisman candidates (a real quote from a real Heisman voter).

On the field font, the Pac-12 boasts a strong slate of contenders in Oregon, Washington, Utah and the ever-present Stanford. The aforementioned Oregon quarterback Justin Herbert returns behind a scary, veteran offensive line. Utah could finally lock up the South with most balanced team Kyle Whittingham has seen in years. Plus the Pac-12 doesn’t shy away from strong non-conference games – Auburn, Notre Dame, Oklahoma, Michigan State and UCF are all on the schedule. If the Pac-12 can defeat some nationally ranked teams, keep the off-field issues to a minimum and not eat each other alive, we could see the West finally get some Playoff respect.

The college football world is full of good follows from Twitter, to Instagram and even Snapchat. But in a land of lit timelines, one feed stands alone – @Coach_Leach. The Washington State head football coach’s entertaining tweets are only one-tenth as funny as his in-person diatribes on his favorite topics – Vikings, a 64-team playoff, dating advice, etc. And his conspiracy theories span far and wide, including his doubts that Bigfoot exists (though he doesn’t entirely rule it out) and his beliefs that there is extra-terrestrial life out there.

But the best Mike Leach tweet as of late was the belly-flop he did into the pool at the behest of his players.

Just another day at the swimming pool with Coach Leach! #GoCougs #JoinTheHunt pic.twitter.com/RbF2svqhgl

So how does a person compete with Leach Tweets? Florida Atlantic head football coach Lane Kiffin has some thoughts.

He has been blocked by not-himself, has tried to recruit everyone from Lebron James to Kanye West and even retweeted RedditCFB when they trolled him with a Kiff bachelor graphic. Kiffin tweets are funny because he tries so hard, Leach tweets are funny because he literally doesn’t try at all. So really it comes down to your sense of humor – laughing at them or laughing with them. Kiffin’s recent shenanigans however – playing Rocky Top and Sweet Home Alabama at FAU’s practice, appeals to the petty in all of us.

Which transfer will have the biggest immediate impact?

The portal saw a lot of action this off season with big names like Jalen Hurts and Justin Fields taking their talents elsewhere. But who will benefit the most from all the changes?

Easy, University of Central Florida of course. The former Fighting Irish quarterback turned Knight Brandon Wimbush will fit in perfectly with UCF head coach Josh Heupel’s high-octane offense. With quarterback Darriel Mack Jr. out due to a broken ankle, there could not have been a better time to transfer. Sure, Wimbush will need to address certain things that made starting an issue at Notre Dame but under Heupel’s watchful eye his passing yardage should improve. It’s true that an inexperienced wide receiver group will prove challenging – luckily Wimbush is extremely mobile and the Knights attack will be balanced by one of the best and deepest running back groups in the AAC. Plus Wimbush adds maturity and experience, something the other two quarterbacks on the depth chart can’t lay claim to just yet.

UCF has scored at least 30 points in a school record 26 straight games and while QB McKenzie Milton was instrumental in that, Wimbush should be able to keep the drive alive.

How will the coaching rebuild at Alabama affect the Tide’s season?

It probably won’t. But let’s pretend for a few precious minutes that Nick Saban is actually human and can go through the same problems as regular people (and programs). Saban had to replace seven assistant coaches this season, with both his offensive coordinator Mike Locksley (now at Maryland) and his defensive coordinator and best recruiter Tosh Lupoi (now with the Cleavland Browns) off on new ventures. That marks a total of 13 new assistant coaches in the last two years at Bama. Champagne problems to be honest – when you are so good that all your coaches (and players, Alabama lost 16 to the NFL draft this year) get the call up.

But realistically Saban’s stronghold on the program should make assimilation seamless and the 44-16 sized chip on the Tide’s shoulder will most likely be the driving force behind another undefeated season. There is a bit of depth concern on defense, particularly on the line, but Alabama’s notoriously simplistic schedule should give new guys time to gel.

My biggest pet peeve about Bama is the lack of importance placed on special teams, i.e. kicking and punting. Last season, Tide placekickers missed nine extra points – NINE! Luckily, Saban recruited one of the nation’s top kickers – incoming freshman Will Reichard. Ultimately Alabama reloads with the best roster in the SEC, under the direction of one of the best coaches in the nation and a recommitment to the “Alabama Factor” so another National Championship game appearance will be par for the course.

Hall Over the Place: Five Burning Questions for the 2019 College Football Season

by Emily Van Buskirk time to read: 4 min
Basketball Get To Know Her: Liz Cambage
Football Representation Matters: Why Some NFL Players Are U…
0