Ok, so this series has taken you to a Grove Street Party. It caught you getting Crunk in Death Valley. And it showed you how Utah boasts that Big Drip Energy.

But now, the journey takes you home - back to the Bay, back to where it all began.

To a packed sideline at Memorial Stadium in Berkeley, 60 minutes before Cal football kicks off against Pac 12 Northern foe Oregon State. It’s a familiar scene – hopeful fans, focused players, composed coaches. And then that sound – that hyperactive, elastic music echoing through the stadium speakers. It hits you hard, first with the gas, then with the break and finally with the dip.

“The Bay Area sound, the Hyphy sound it makes you make that stank face,” explained Cal defensive backs coach Gerald Alexander. “It's just different, it’s a different deal. It gets the guys going. That music just penetrates your soul.”

But where does it come from? How exactly does one go dumb?

That’s a complicated question – the term “Hyphy” was coined by Bay Area rapper Keak Da Sneak in 1994, but many consider the late Mac Dre the father of the movement. The hyphy movement never went mainstream, but those born into the culture celebrate it proudly and pass it along enthusiastically. Because everyone knows you can't kill hyphy.

“It’s very unique,” continued Alexander. “Being Southern California born and raised, it’s a little bit different here in the Bay. It’s a very unique sound. And the more you live here and the more you meet people from here, you realize how proud they are to be from the Bay. You see that uniqueness that comes from the music, the slang, the culture of the Bay Area – you adopt that when you are a part of this Cal family. Whether you come from Texas or the East Coast or just local, you embrace everything culturally that the Bay Area provides.”

But how did this live music make it into Cal football’s pregame mix? That answer is easy – DJ Shanego, Cal’s resident spinner of slaps.

“I’ve been in the Bay since 2012 and I’ve definitely been influenced by it, like heavily – it’s hard not to,” said Shanego. “The music I listened to when I got to college was nothing but Bay Area. It just kind of took me and I was like ‘man, I love this stuff.’”

Shanego, a Texas native and former college lacrosse player, works from a small tent next to the field – a stone’s throw from where the players are warming up.

“They added the DJ and I love it especially because the wide receivers warm up right in front of the DJ booth – we got out own little VIP area over there,” exclaimed Cal wide receivers coach Burl Toler III. “It’s a party out here too. We love it. The guys feed off the energy, they obviously bring their own juice but to have the fans into it, from kids to the older people, there’s nothing like having that fan support.”

A former player turned coach, Toler has been coming to Cal football games since he was a little kid. But the addition of a pre-game sideline DJ has elevated the experience, particularly for the players.

“We definitely appreciate it because he’s right there on the sideline with us, so we are feeding off of his energy and he’s feeding off of us,” said Cal wide receiver Ricky Walker III. “He sees us bouncing to the music and he gets excited and turns us up.”

Having a pre-game vibe curated especially for you is unique, Cal being one of the few programs with a live DJ on the field.

“I feel like our music and our pregame is way better than everybody else’s,” boasts senior cornerback Josh Drayden. “It means a lot because the stuff he plays is kind of the same stuff that’s on my pregame playlist. So when I hear it and the crowd starts coming in and I look over and see some of my teammates dancing – even the coaches are dancing it kind of feels like a function." 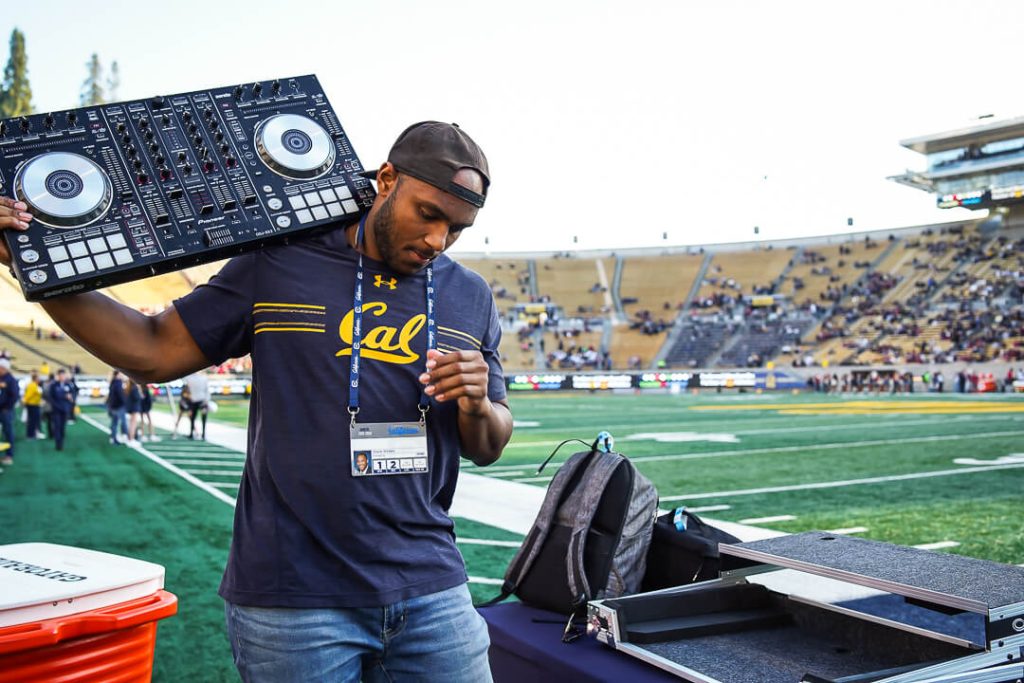 While several players and coaches can be seen bouncing and rocking with Shanego's beats, head coach Justin Wilcox appreciates the practicality of it all.

“If it helps the players be at their best, I’m all for it, I honestly just don’t really notice it,” said Wilcox. “I knew there was a DJ, I’ve seen him before. So the better he can make the environment for everybody is good. The hard thing about music is not everybody is always going to agree on what they like or what’s good, so ultimately if it’s good for our players and our recruits and our fans, I see it as a positive thing.”

To be fair, Wilcox has more on his mind than the music.

“I haven’t heard music coming out of his office yet – he’s too busy running the show,” laughed Toler.

But the idea of DJs and live music being of a selling point for recruits is something coaches are starting to think seriously about.

“I think it just creates a vibe – I know that’s kind of the 'word of the day,' but the recruits are here to get a preview of a simulated game experience," said Alexander. "And they get a chance to kind of visualize themselves as those players in that Cal uniform and they see the emotions of the game and the music and the environment. They get to see the tone being set.”

Drayden agrees, acknowledging the role Shanego plays in hyping up the recruits.

“You see the recruits dancing, you come over and give them a little handshake – it’s a feel,” revealed Drayden.

It’s hard to miss the crowd that gathers around the DJ tent before each Cal home game – a healthy mix of donors, alums and potential future California Golden Bears.

“I don’t talk to Wilcox too much," quipped Shanego. "He knows who I am, he knows I exist, and I think he knows the value I bring because it feels like they send recruits over to where I am so they can feel the vibe,”

Oregon State defeated Cal 21-17 that Saturday in October. But the Bears went on to beat Washington State 33-20 at home two weeks later. The Bears suffered some setbacks and dropped their final home game to USC 41-17 last weekend.

In his last Saturday session of the season, DJ Shanego created a special remix of Too Short’s “Blow the Whistle” (Editor's note: put your headphones on). When Short asks listeners what his favorite word is, Shanego threw in a sound bite of Dwight Schrute from The Office saying “Bears!” Kind of an homage to his buddy and big Office fan, senior running back Alex Netherda.

What's my favorite word?
Bears!
Why they gotta say it like $hort?
Bears!
You know they can't play on my court
Can't hang with the big dogs
Stay on the porch

“Having the music on the field, that environment, that ambiance be tailor made to us is really special,” said Netherda. “And you feel the support of the fans on another level – it just kind of rocks with you. He just keeps that steady baseline bumping. Shanego is my guy - he’s going to DJ my wedding, probably.”

That special Bay Area sound is hard to define, hard to describe but all the players and coaches agreed that Walker, one of the team’s numerous music-makers summed it up best.

“He plays that bounce - it’s that bounce that gets you hyped before the game,” clarified Walker. “It’s just a different type of atmosphere, it’s fun, its alive. It’s the Bay Area sound, yadadamean?” (Again, headphones.)

The Bears finish out the season on the road with games against Bay Area rival Stanford and the Southern California bears, UCLA. Cal will be without its musical maestro, but DJ Shanego will surely be mixing it up in spirit.