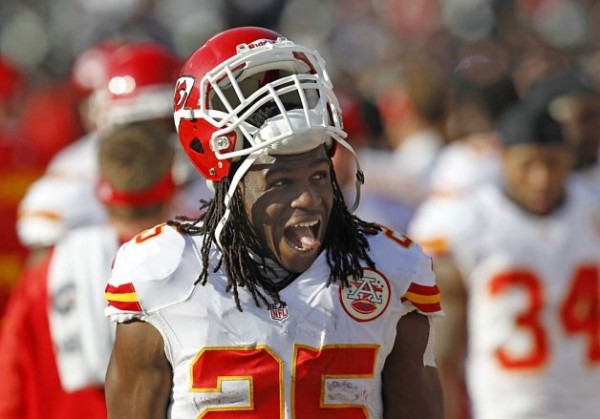 I'd had a long Saturday and I woke up relatively early on Sunday because business needed to be handled. So, when 10:00 struck on the clock, it meant that football was to be watched. I was probably going on 5 hours of sleep as I watched the early games, and I knew that the following things were going to happen:

- My Jacksonville Jaguars would find a way to lose vs. Buffalo. (They did.)
- I'd make a visit to the cafe up the street at halftime. (Because there's a fine barista there.)
- My fantasy football team should have no issue making it to the title game. (Uh oh.)

I won't go into particulars about my fantasy team, or the fantasy team I was going against, because we all know you don't care about my fantasy football team. However, at some point between 12:30-12:45pm I passed out. I remember my squad, the Boss Hogg Outlawz, had a 25-point lead, when I awoke at around 2:48pm...my Outlawz were down 25 points. Good God, what happened?

In the Kansas City Chiefs 56-31 win over the Oakland Raiders, here was his final tally:

For some of you lucky owners of Jamaal Charles in fantasy football, this is the greatest day ever. The bragging rights that come with a chance of winning a fantasy championship (and the illegal money that's wagered along with it) could be now firmly in your grasp with these Jamaal Charles wind sprints. To you people, (outside of Craig, who I lost to) I tip my cap. As the general manager of the Boss Hogg Outlawz, and a substantial amount of money now lost, I'm going to just sit here and drink a lot of spiked coffee and think about that cute ass barista all day. Y'all pray for ya boy.

Here are your morning links, have a great Monday. Well, except for you Jamaal Charles. Except for you.

Why Didn't The Cowboys Just Run The Damn Ball? -- Deadspin

Mayweather: Broner a True Champ, I Stand Behind Him! -- Boxing Scene

Everybody loves Draymond: Why the second-year Warriors' forward is thriving -- SB Nation