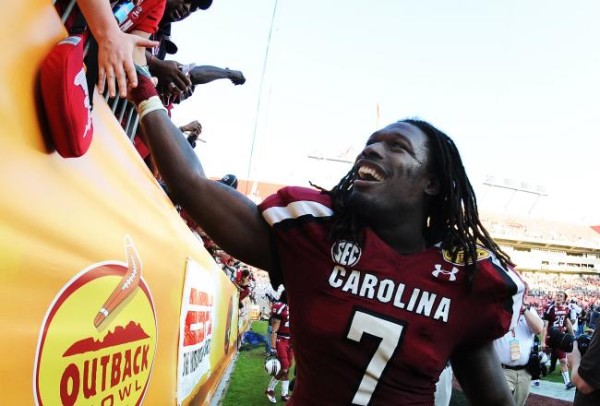 Go ahead and give me an honest answer right now. Who would you take if you were the Kansas City Chiefs sitting with the #1 pick in the upcoming 2013 NFL Draft? Do you even have a real clue? Many of us don't, and I imagine many NFL general managers and scouts don't have a clear-cut answer either. Mike Silver of Yahoo! Sports noted that phenom South Carolina Gamecocks defensive end Jadeveon Clowney could easily go #1 in this draft if the law was on his side. Silver suggests he should go on ahead and "lawyer up and try to barge his way into the NFL this spring." Just like Clowney did versus Michigan in the Outback Bowl, those poor dreadlocked fellows.

He is a 6-foot-6, 256-pound athletic wonder who tracks opposing ball carriers like a laser dot and punishes them like a vindictive medicine ball. If Jadeveon Clowney were allowed to enter April's NFL draft, rather than prepare for his junior season at South Carolina, the dripping-with-talent defensive end would likely go in the top three, and possibly the top one.

Yet Clowney, because of a nine-year-old decision by the U.S. Court of Appeals for the 2nd Circuit, doesn't have the option to cash in immediately on his potential. And the risk he'll assume by playing another season for the Gamecocks has prompted some, including Charlotte Observer columnist Tom Sorensen, to suggest that Clowney sit out the 2013 season before going pro.

I have a better idea: Clowney, who turns 20 on Valentine's Day, should lawyer up and try to barge his way into the NFL this spring – the same way he blasted into the Michigan backfield during last month's Outback Bowl.

Which leads me to our question of the day ...

What if those outdated rules were thrown out the window, who would the Kansas City Chiefs take #1 then? Who would be the #1 player on Mel Kiper's and Todd McShay's big boards? Would it still be Clowney? What about the Texas legend that is Aggies' QB Johnny Manziel? Could Teddy Bridgewater challenge for the #1 pick? What about stud tailbacks like Alabama's TJ Yeldon and Georgia's Todd Gurley?

Let us know in the comments sections your thoughts on this. All I know is this, since the Jacksonville Jaguars have the #2 pick in this draft, I'd sure love to take Johnny Football ... ah well.