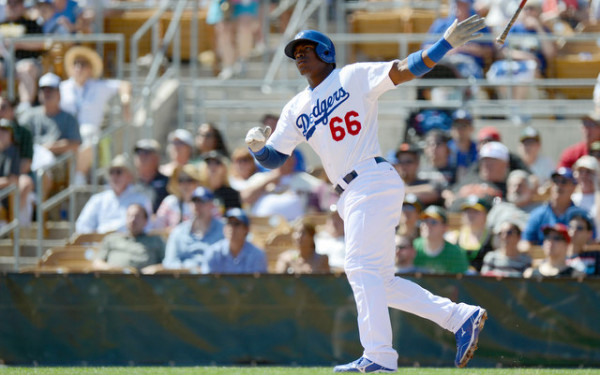 On Wednesday night, the three amigos joined together on #theUCshow to discuss the latest and greatest that's happening (and not happening) in the sports world and the world of sports betting sites. One point in particular riled up our own Justin Tinsley, as MLB has decided to suspend many of their players for a multitude of games for violating their performance enhancing drug policy. Players like Alex Rodriguez and Ryan Braun are in the headlines for their repeated shenanigans and tomfoolery, and as such, MLB decided to suspend these guys AFTER the All-Star game. This made Tinsley furious, and the man slandered everything that is America's pastime and told the world why it wasn't worth a damn.

It was truly a great listen.

Moreover, with the baseball world fighting for the attention of Joe Casual Sports Fan, there also has been plenty of attention on one Los Angeles Dodger rookie outfielder named Yasiel Puig. Puig, the man who's built like Steve McNair and is hitting nearly .400 as we head into the All-Star break, has been the talk of Hollywood and baseball fans everywhere, as his dynamic talent has been on par with his brash style of play. That brashness has evidently rubbed plenty of folks the wrong way.

"If he's my teammate, I probably try to teach him how to behave in the big leagues," Montero said. "He's creating a bad reputation around the league, and it's unfortunate because the talent that he has is to be one of the greatest players in the big leagues.

Then on Tuesday, Puig was thrown out easily at the plate in the fifth inning but not before he collided with Montero and then stared down the catcher as he walked back to the dugout. Replays showed Montero waving his finger at the rookie, a la former NBA big man Dikembe Mutombo.

(Random: But is it just me, or does Puig remind you of some blend of Russell Westbrook and Rasheed Wallace? Yes? No? Okay, let me chill.)

You see, Miguel Montero sounds like the old man in the neighborhood who yells at the kids to get off his lawn because their game of street football spilled into his yard. This level of "respect" that's supposed to be shown in baseball is borderline laughable, and I say that as someone who played the game.

The nerve of this 22-year old young man for playing a game like a....game. THE NERVE!

Bill Plaschke of the LA Times also penned a piece on Puig and his ability to become a villain to opposing teams and their fans (really though, just Arizona....they're butthurt) for reasons that seem skeptical to me. Here's Plaschke taking note to have the D-Backs fans acted when they saw #66:

They must also hate that I can't name more than 3 players on their team right now. More lameness from the D-Backs:

The Diamondbacks were also angry at Puig for a perceived snub of one of the franchise's legendary heroes, Luis Gonzalez. Before the series opener Monday, Gonzalez approached Puig behind the batting cage to introduce himself and talk about their shared Cuban roots.

Puig had apparently never heard of Gonzalez, and paid him little attention until Dodgers coach Mark McGwire explained Gonzalez's game-winning hit in the ninth inning of Game 7 of the 2001 World Series and his significance to the organization.

Gonzalez then went on the local radio ripping Puig for showing bad manners, which is, face it, a little silly considering Puig has only been in the big leagues 35 days and can't be expected to know about players who starred when he was a child in information-controlled Cuba.

So you're telling me the guy, Gonzalez, who may or may not have taken steroids (because a guy who waited until age 33 to hit 57 homers, and who had never hit more than 31 in his career prior should be so smug) decided to go tattle-tale on Puig for not knowing who in the hell he was, probably because during your "emergence" in 2001, the man in question was 10 years old? (In Cuba, a communist country who is restrictive to the information that comes into their country!) Luis Gonzalez, go swan dive off a short cliff.

Nah man, I'm going to sit on this side of the room and reminisce to the types of baseball players I loved growing up. From the pompous jerk that was Rickey Henderson, to the asshole that was Barry Bonds (who STILL hasn't been charged with taking steroids, but I digress) to the smug king that is Manny Ramirez and the cocky bastard that was Pedro Martinez. I loved those guys because they were full of panache, they didn't care what anyone thought of them and they balled out.

They see Yasiel Puig rolling, they hating. (Chamillionaire what up, you owe me) So I'm going to keep rooting for the young fella, hoping that he keeps this up. Keep swaggin' on them boys and let 'em know who you are #66. Rumble young man, rumble.

3 Replies to “While You All Try To Vilify Yasiel Puig, I'll Be Over Here Enjoying The Swag”