I can't remember being so pissed off at a network in my entire life.

I cleared my schedule, work up early, cooked myself breakfast and did everything else I needed to do so that I could watch my favorite events of the Olympics. The track and field events. I won't go into the pageantry of why I like the track and field events so much, but all I can remember is that my mama would jump out of her seat when Carl Lewis and Florence Griffith-Joyner sprinted around that track to win Olympic gold. I was hooked ever since.

However, NBC decided to hijack the track and field proceedings in an act of selfish greed and pure ignorance.

I've watched these 2012 Olympics since they began over a week ago, and I thought I knew the drill. Events would start throughout the day and would be shown on tape-delay in the evening. Cool beans. For someone like myself, one who works in Corporate America, watching it in the evening was perfect. On the weekends, this wouldn't be nearly as much of an issue, as I could watch during the day if I choose, and if I wanted to watch again (or catch up) in the evening, I had that right as well.

For some reason, NBC wanted to do some different shit.

NBC decided to not show the track and field events like they said, at 10:15 a.m. The problem with that is, they only showed it live online via a stream. Now look, I'm not going to say that I'm against watching legal streams of video on the internet, but if I have the option of watching it on television, I'd much rather watch it on my beautiful 51" Hoshitoshi ... errr, Samsung plasma TV.

I wouldn't have had a problem with NBC doing this at all, but they hadn't done this for any other events in the Olympics. Swimming. Gymnastics. Water polo. Badminton. Trampolining. Equestrian. Any other sport that I can think of that I'd view as a leisure sport. Table tennis. Yeah. NBC, YOU TELEVISED ALL THESE OTHER EVENTS LIVE ON NBC, CNBC, MSNBC AND THE NBC SPORTS NETWORK, BUT WHEN IT COMES TO THE PINNACLE EVENTS OF THE OLYMPICS, YOU WANT TO HIGHSIDE US AND NOT SHOW US USAIN BOLT IN ALL HIS GLORY UNTIL 11:30 P.M.??? 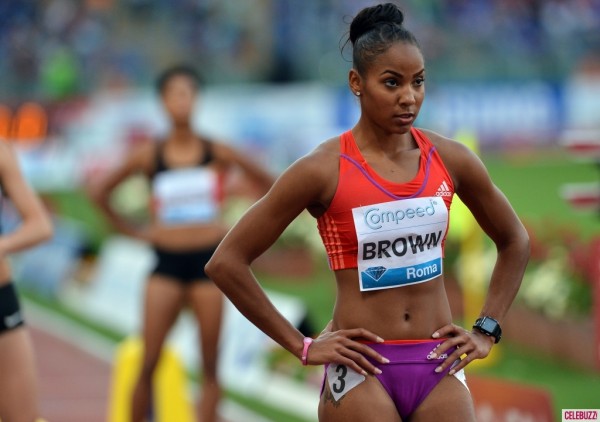 I'm not going to mention the fact (yep, I'm about to mention it) that you started your friggin' telecast with women's diving. Sigh … then did two women's 400m hurdle events (hello T'Erea Brown, I love you boo. Fellas, she's mine. Back off.) which was cool, but then you went to the women's beach volleyball QUARTERFINALS? Really? I mean ... good grief. By the time we got to see the great Usain Bolt run his 100 meter final, it was past 11:00 p.m. and I began wondering if I'd actually get to see the Jamaican sprint gawd do his thing.

Lifehacker: How an American Can Stream the BBC's Olympics Coverage and Overcome #NBCFail

FOX Deportes: Nothing like testing out product the Nike Vault

Edge of Sports: Mitt Romney Is Wrong About the London Olympics, and This Is Unfortunate

SLAM Online: LeBron James Says Team USA Has to do a Better Job of Communicating

Front Office: The good, bad and ugly of the NBA summer

5 Replies to “Starting Lineups: NBC Held Us Hostage, But Usain Bolt's Still The King Of 100 Meters”