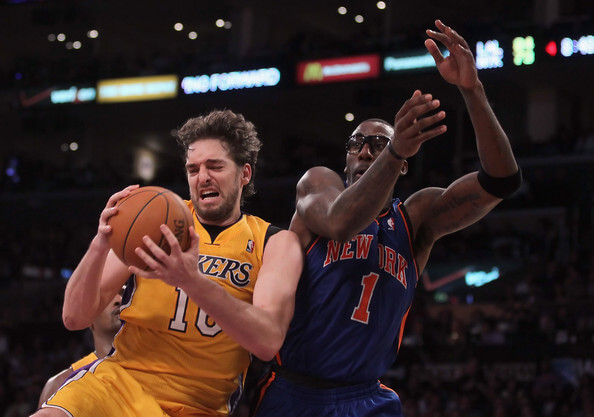 There was a point in time where I would openly come out and say that Amar'e Stoudemire was the best power forward in the NBA. It wasn't that I actually believed it; I was just enamored by the man's physical capabilities and the potential that oozed out of him. 6'10", 250 pounds and a first step that reminded many of a young James Worthy.

Yet, there were some flaws in his game that were hard to overlook. The inability to play defense, the lack of desire to pass the ball, the tendency to lean on that mid-range jumper and, most importantly, rebound worth a damn.

Kenny and I have had many conversations about big men and their ability to rebound. If you're a starter playing true starter's minutes, then you have to get ten rebounds a game to be truly worth a damn or, at least, so you can command some damn respect. Time and time again, Amar'e has proven to us that he has no desire at all to rebound. Too many nights he'd put up numbers like four, seven and five in the rebound column and we'd watch dudes 3-4 inches smaller than him but who had some heart about them go up and get 10-12 boards.

It's a damn disgrace.

So last night, while coming home from watching some high school kids hoop, I noticed that Orlando and New York squared off. Orlando won 103-92, and then I saw Amare's stat line.

No, man; that is not acceptable. This is why no one respects you, Amar'e. Yes, you have a knee that's been operated on more than Kim Kardashian's face but, dammit, if you have the ability to go up there repeatedly and dunk on people, then you should have every ability in the world necessary to rebound the ball off the rim.

That's not even what really pissed me off today, as I didn't actually have any inclination to write about Stoudemire. However, a report on Pro Basketball Talk came out that stated Stoudemire was upset that he didn't make the Team USA final 20.

“It’s definitely not my choice,” Stoudemire said. “I would love to play. If USA wants me to play, then I’m totally down with playing. If they need me, I’m there.” In 2010, the Knicks told Stoudemire, who has had multiple knee surgeries, to withdraw from the World Championships, because they couldn’t insure his contract."

Yes, I can understand that you might feel some kind of way that your fellow teammates Carmelo Anthony and Tyson Chandler are on the list. Yes, you might even feel some kind of way that your head coach Mike D’Antoni is an assistant on the team. But sir, there's no chance you will be out there in London embarrassing the United States of America getting two rebounds in a game. There's no country for 6'10" shooting guards, Amar'e, so sit down, rest your knee and go watch some old footage of Moses Malone, Charles Barkley and Dennis Rodman rebounding the ball worth a damn.

*logs off and continues to sip his soy caramel macchiato*

3 Replies to “Two Rebounds: Amar'e Stoudemire, You Disgust Me. No, You Can't Play On Team USA And Embarrass America”