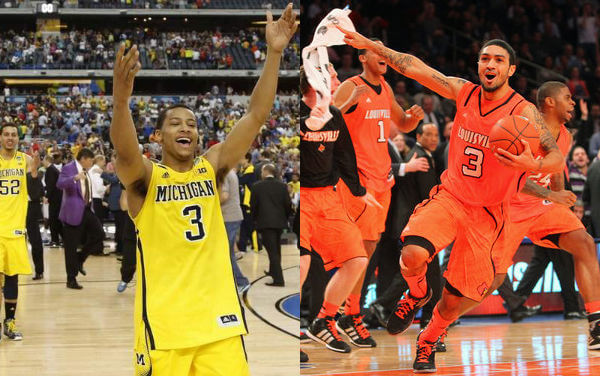 Bring up the name Ed Cota or Wayne Turner to a fan of the North Carolina Tar Heels or the Kentucky Wildcats.

Bring up the name Bobby Hurley or Mateen Cleaves to a fan of the Duke Blue Devils or the Michigan State Spartans.

It could be Mike Bibby, Andre Miller, Mario Chalmers, or Khalid El-Amin....or any other famous point guard from college basketball lore...these names roll off your tongue as easy as a person of the opposite sex whom you had a crush on as a younger does. (Tanisha, Nicole, Lindsay, Kara, Vanessa, Aimee...I could do this all day. I also had no game as a younger, still don't.)

As we prepare to witness the Michigan Wolverines and the Louisville Cardinals do battle in the final college basketball game of the 2012-13 season, there are two guys whom your eyes immediately focus on and demand your attention. Trey Burke and Peyton Siva.

I won't sit here and waste your time and energy waxing poetic on the greatness of Burke and Siva, although its interesting to note that in a Grantland interview, Jalen Rose noted that Burke was having the best individual career in Michigan history, better than Cazzie Russell and Chris Webber. Also of note, is that Peyton Siva is the most recognizable player in Louisville history of the past 25 years, and is just as much of the reason of Pitino's success in Louisville versus anyone else. That's how important both players have been to their respective programs.

They will be the last two guys named in their respective starting lineups, earning the feeling of goosebumps upon everyone's proverbial goosebumps. Both will have a huge responsibility in front of them on Monday night, as it wouldn't be enough to just ask one to guard the other, but then also to manage each other's offense on the biggest stage in front of 50,000+ in the Georgia Dome could make anyone nervous.

But that's okay. They can handle it. They're all-world point guards just searching for one final shining moment. This is all that matters, and this is why we watch. Not for Kevin Ware. Not for the chance that Chris Webber shows up with the Fab 5. Not for crazy looking uniforms. We don't come to this moment for any of that.

We come for players we've followed for years and years to transcend themselves into heroes. Trey Burke. Peyton Siva. Go be heroes gentlemen, go be heroes.