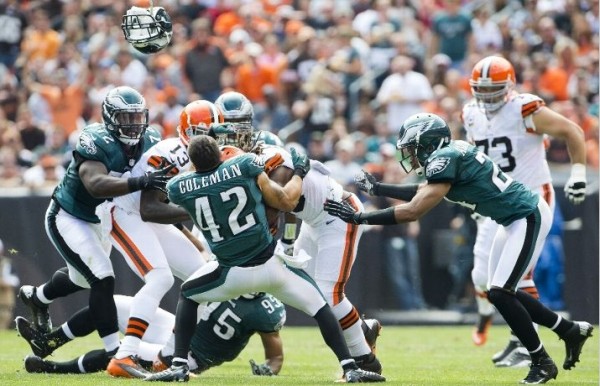 Trent Richardson was selected by the Cleveland Browns as the third overall pick of the 2012 NFL Draft after a stellar career for the Alabama Crimson Tide. Many scouts rated Richardson as the best running back prospect since Adrian Peterson ran wind sprints for the Oklahoma Sooners. One man that was not impressed with the selection of Richardson was the greatest football player of all-time, Mr. Jim Brown.

I imagine that Richardson heard this and deposited the thought in the back of his mind. "Ordinary, huh? Okay, I'll show you, Mr. Jim Brown."

What happened on Sunday during the opening of the 2012 NFL season was nothing but out of the ordinary. Philadelphia Eagles' safety Kurt Coleman was the poor soul that had to be sacrificed.

Somewhere in a quiet room, I have a feeling that Mr. Jim Brown saw Richardson's trucking of Coleman and quietly smiled and nodded his head in approval. It's only game one, but I have a feeling we'll see a few more plays like this from No. 33, while old No. 32 keeps a watchful eye in the process.