Tiago Splitter Beims, 28, passed away on Sunday, June 9th, 2013, during game 2 of the 2013 NBA Finals as the San Antonio Spurs squared off with the Miami Heat. Splitter, the Brazilian big man who anchors the frontline for the Spurs, has always been known as a jovial and gregarious fellow on the San Antonio roster, but unfortunately his happy-go-lucky personality meet its ultimate demise with one bad decision in trying to dunk the basketball on LeBron James.

Sources close to the Miami Heat said that LeBron James was visibly upset during halftime because he decided to check his Samsung Galaxy Note 2 in his locker to see what Twitter was talking about. Although his Heat were up 5 points on the Spurs at the half, many were saying that LeBron was choking, asking what was wrong with him and that this Game 2 performance looked like 2011 all over again. “DIDN’T THESE PEOPLE HERE ME THE OTHER DAY! I TOLD EM I’VE DONE MORE AND LOST! LET ME DO ME!” Yelled James as he gulped an entire bottle of Powerade and spit it in the air a la Triple H. (Sources may or may not have said that Chris Bosh stood underneath the spewn Powerade mist that fell from the air)

So it was that the fourth quarter came along and the Miami Heat began to open up “a can” on the Spurs and the lead grew to double-digits. The Spurs, being the Spurs and all, were still capable of making one last run….and that’s when Tiago Splitter dived to the lane to try to dunk the ball.

Fans said that they saw “The Hand Of The King” go high into the air and reject the soul of Splitter’s right into heaven. Splitter began speaking in Brazilian tongues and Gregg Popovich immediately told Tracy McGrady to enter the game.

A collection plate was passed around the arena for the Splitter family as they try and recover from their beloved son committing such a heinous crime like trying to dunk on The King. Evidently Damon Jones and Jason Terry made sizable donations.

by Eddie Maisonet, III time to read: 1 min
Basketball Off The Rez: The Shoni Schimmel Story 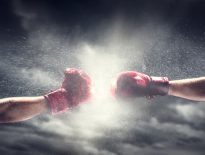