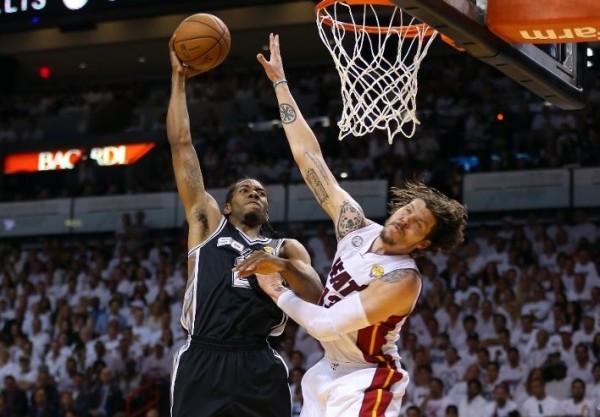 Michael Lloyd Miller, 33, passed away on Tuesday, June 18th, 2013, during game 6 of the 2013 NBA Finals as the San Antonio Spurs squared off with the Miami Heat. Miller, the legendary forward of the Florida Gators, 13-year NBA veteran and the illegitimate big brother of Joe Dirt , was assassinated in front of 18,000 mojito-sipping Miami Heat fans as the man known as “The Straight-Back Braids Gawd” eliminated Miller from this Earth.

Sources say that before Game 6 of the NBA Finals, The Straight-Back Braids Gawd (you say the whole thing like A Tribe Called Quest or A Pimp Named Slick Back) a.k.a. Kawhi Leonard was listening to an entire mix of songs composed by the rapper Pusha T. Mr. T’s lyrics have been known to put Leonard in a particular mood, and no one in the Spurs locker room bothered him one bit. Then, Leonard pulled out his laptop and began watching video clips of Ben Wallace, Udonis Haslem and Rony Turiaf, three of the biggest goons in NBA history who also wore straight-back braids during their playing tenure. This made Leonard foam at the mouth and head coach Gregg Popovich encouraged the team to begin warming up now.

However, the Spurs trainer then noticed that Leonard popped out a portable DVD player that showed a montage of clips from The Wire. There, the infamous character Omar was terrorizing folks and ending folks lives with no regard for human life. The Spurs trainer said that Leonard’s entire head swiveled in a 360-degree rotation, then Leonard put on his warm-ups and sprinted to the court.

So it was that early in the first quarter, after TSBBG made a 3-pointer that Mike Miller decided to match him with another 3-pointer, then The Straight-Back Based Gawd decided he had had enough of Mr. Miller.

Fans say that while stealing the soul from Miller’s body, The Straight-Back Braids Gawd also smacked the living daylights out of Miller in the face. Flo-Rida, who was sitting courtside near the Spurs bench, said that Leonard yelled out, “YOU DON’T MESS WITH FOLKS WHO WEAR BRAIDS IN 2013!” Shortly thereafter, Leonard chopped Flo-Rida’s head off and the crowd gave Leonard a standing ovation.

A foundation has been started in Miller’s name called the “Trifling With Grown Men Who Wear Braids In 2013 Is Probably A Bad Idea” scholarship. Allen Iverson has donated three pairs of Reeboks, Ludacris has donated Chicken and Beer, Slim Thug has donated a used 1996 Chevy Impala and Ja Rule will donate his time to enlighten folks on how to survive in prison and how to recover from beefs with 50 Cent.

Basketball The NBA Finals, The Anti-Hero And The Generational…
3