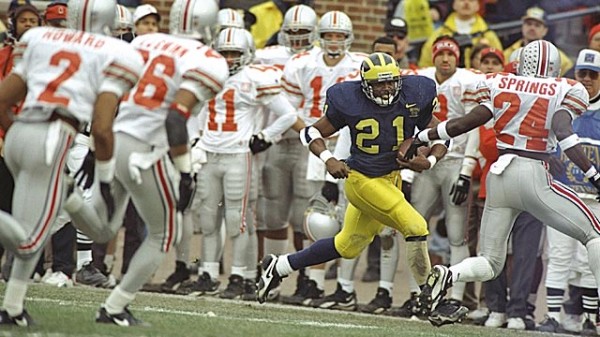 I used to live in Cincinnati, Ohio for over six years of my life. In that time, you quickly begin to understand that there are two types of people in Ohio. People from Ohio, and Ohio State Buckeyes. People from Ohio are generally pretty friendly, congenial and wholesome people to deal with. However, these other folks, the ones who are fans of the Ohio State Buckeyes? Good God, they are a different breed. Now, that's not to say they can't be friendly, congenial and wholesome, but there's just a different level of irrationality that resides in these people's soul. It's unreal.

With that being said, I have the perfect thing for you to do if you want to get under a Buckeyes fan's skin. All you have to do is day a certain three-digit number.

The fact that I, along with tons of people around the world, can perfectly spell Tshimanga "Tim" Biakabutuka's name without looking it up should tell you how much this man is revered. For Michigan Wolverines fans, the man who turned 40 years old today is a hero. The one-man wrecking ball who was triumphant against their biggest rival. For Ohio State fans, the mere utterance of the man's name can cause one to upchuck the infamous seeds from an Ohio tree.

SI's Tim Layden eloquently said that Biakabatuka "had Ohio State defenders hanging from him like steer wrestlers", and November 25th, 1995 became the day that every Wolverine or Buckeye fan would never forget:

But far more than to all of those, it belonged to the Michigan offensive line and to junior running back Tshimanga Biakabutuka, who rushed 37 times for 313 yards, the second most in a game by a Wolverine, behind Ron Johnson's 347 in 1968.

The 6'1", 210-pound Biakabutuka's performance was enthralling not only for its statistical weight but also for its tenacity. On Michigan's second possession Biakabutuka broke three tackles in the secondary and ran 44 yards to the Ohio State six-yard line. Near the end of the third quarter he went 38 yards to the Ohio State 25, running the final 15 yards with Buckeye defensive backs Shawn Springs and Ty Howard hanging from him like steer wrestlers. Twice he left the game with an injury—he pulled a calf muscle in the second quarter and had the wind knocked out of him in the third—and twice he returned.

ONE: This 1995 Ohio State Buckeyes roster is by many, the best Ohio State team that's ever been put together. #2 Ohio State was led by eventual Heisman Trophy winner Eddie George and future NFL stars Orlando Pace, Terry Glenn, Mike Vrabel, Shawn Springs, and Rickey Dudley. This team against Tommie Frazier and the #1 ranked Nebraska Cornhuskers would've been must-watch television.

TWO: Terry Glenn will always be one of my favorite players of all-time. However, before The Game, Glenn came out in the press and basically stated that there was nothing special about the Wolverines. "Michigan's nothing," is what Glenn said. Yep....nothing.

THREE: If Ohio State would've won this game like they were supposed to, then it would've created a controversy that serves as the reason the BCS was created in the first place. Had they finished the season #2 the Bowl Alliance would have been unable to pit #1 vs. #2 as the Big Ten champ was tied to the Rose Bowl. You see, there was a thing in 1995 called The Bowl Alliance. The Bowl Alliance created a national championship game which would rotate between the Orange, Sugar, and Fiesta Bowls free of conference tie-ins and featuring the #1 and #2 teams as chosen by the Bowl Alliance Poll. The Pac-10 and Big Ten chose not to participate, keeping their tie-ins with the Rose Bowl. Nebraska (Big 8) was #1 and Florida (SEC) was #3 at the time. So yeah, the BCS was kinda better than what we had previously.

Starting this year, we'll now have a BCS Playoff System, which feels weird to finally have but I personally am glad that the process is evolving. To that, we can thank Mr. 313 and the Ohio State Buckeyes for being the catalysts of change that America dearly needed.

4 Replies to “Tim Biakabatuka Turns 40 Today, So Let's Reminisce Back When He Ran For 313 Yards On Ohio State”