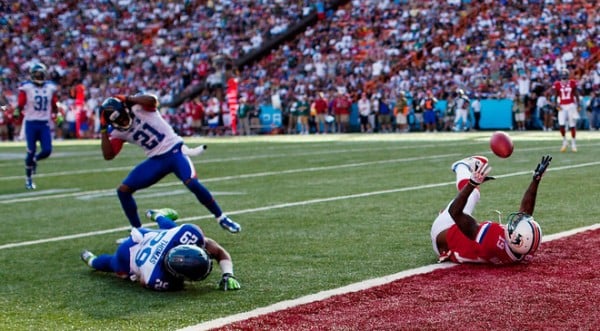 Believe it or not, an estimated 13 million adults watched the 2012 NFC-AFC Pro Bowl on Sunday night. If you watched the game, you'd think the players thought that 13 people total were watching, for many fans who love the game of football have virtually sneered at what the Pro Bowl has become. Lineman going half-speed, quarterbacks throwing the ball against vanilla defenses, Brandon Marshall catching passes on his back and about 238 different sideline interviews going on throughout the game. It's not really a watchable experience, and it eats at the integrity of a NFL product that we once beloved as kids.

“I’ll be honest with you,” Rodgers said on his radio show on ESPN 540. “I was a little bit disappointed. I felt like some of the guys on the NFC side embarrassed themselves. Overall, I was just disappointed by the lack of pride by some of the players that played in the game.”

So what can we do to fix this conundrum? I got three ideas, and I promise none of them suck. Okay...I hope they don't suck.

I tinkered with this idea for a few minutes before I realized how brilliant it was. Take the top two vote-getters from each conference and get the four players into a room and do what every red-blooded American loves to do a few weeks before the beginning of the NFL season. FANTASY DRAFT! Each GM gets a quarterback, two wide receivers, one tight end, one running back and one offensive lineman on offense. On defense, you get two corners, one safety, one linebacker and one pass rusher on defense. Quarterbacks can't run and the offenses/defenses can run whatever they want. The AFC teams face each other first, then the NFC teams, then you have an actual Pro Bowl championship between the two winners.

Did I just blow your mind? Of course, I did, so the obvious question is...who's not watching this????

Who's not paying money to see Mike Wallace and Devin Hester run a sprint? You could do a relay with the corners, receivers and tailbacks. Who's not paying to see this??? Moreover, in comparison to the other three professional leagues all star events, the NFL does a poor job of marketing their skills competitions. They could easily be more competitive, and include other events like:

- A longest throw competition. Who's got a stronger arm between Cam Newton and Matthew Stafford? I'd pay money to see this.

- One-on-One competitions. When you're with your buddies and the pigskin is getting tossed around, what do you usually do? Line up one-on-one on the outside and run routes. Why can't Darrelle Revis and Larry Fitzgerald go mano-e-mano in a competition? I'm paying money to see this.

- Fat man skills. There's nothing else that needs to be said. Let Ndamukong Suh and D'Brickashaw Ferguson go out there and run around and catch the ball. This will be hilarious.

In this day and age of professional football, where players were holding out because of a lack of guaranteed money, you could probably get more guys to go out there and play worth a damn if you added a couple of zeroes to those so-called "paltry" bonus checks. $50K to each winning player, $25K to the losers. Look, add a zero to the winning side. The losing team gets nothing and...play the game in Vegas under the lights. Guaranteed players will be playing balls to the wall.