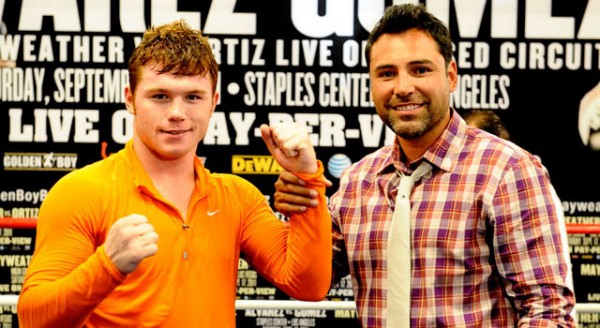 May 5th was supposed to be a glorious occasion. On the first Saturday of May, Coronas would be consumed, random parties of Hispanic influence would be planned and a tremendous day on the sports calendar would ensue for all to enjoy.

If you haven't noticed, the first weekend in May has turned (somewhat) into a national sports holiday. The NBA and NHL playoffs will be in full swing, the Kentucky Derby holds court in the late afternoon, and the evening is brought to a close with a boxing pay-per-view card for the ages. Just in the past five years (during the first weekend in May), Manny Pacquiao fought Shane Mosley in 2011, Floyd Mayweather also fought Mosley in 2010 and Oscar De La Hoya fought Mayweather in 2007.

In 2012, we get Floyd again, as he'll prepare to face Miguel Cotto in Las Vegas. (Who's trying to roll?) It's not the fight we wanted (again), as the world wants to see Manny Pacquiao fight before they apply for their respective AARP cards, but it promises to be entertaining. However, a deal that apparently has been struck is who will fight the winner of Mayweather/Cotto, and he doesn't reside in the Phillipines.

To finalize the Mosley deal,  [Saul] "Canelo" [Alvarez] states that he reached an agreement with Golden Boy to fight the Mayweather-Cotto winner. Canelo expects the winner to be Mayweather, but doesn't see the fight happening until 2013.

"The condition to fight in a preliminary [position to] Mayweather - is that I would face whoever wins. If Mayweather wins, [the fight] won't happen until next year because he only fights once per year and he has to go to jail for three months, so it wouldn't happen until 2013," Canelo said.

"I placed that condition in, and I have every intention to follow through on this. I initially didn't want appear as a co-star. I preferred to fight on another day and another place. I was told that Mayweather also wants to fight with me and that I would be next, so we agreed to [be the co-feature]."

1. If Mayweather wins,  then the following realizations must be made. Floyd's not fighting until 2013. The next fight he fights will be Canelo, thus meaning that a Mayweather/Pacquiao fight won't happen for at least 18 months.

2. If Cotto wins, then another Mexico (Canelo) vs. Puerto Rico (Cotto) battle will take place. This will be a beautiful thing, unless a riot like this ensues. Then, it'll be the worst thing ever.

3. At the end of the day, boxing fans lose again. This generation will never get their "fight of the century" that previous generations got to enjoy. From Marciano vs.  Louis, to Ali vs. Foreman, to Tyson vs. Holyfield, the biggest fights have eventually taken center stage, and the memories will always stay fresh in the mind.

Unfortunately, this generation will only remember the stalled tactics from two fighters who never gave the fans the fight they clamored for.

One Reply to “The Winner of Mayweather Vs. Cotto Will Face...Canelo Alvarez?”