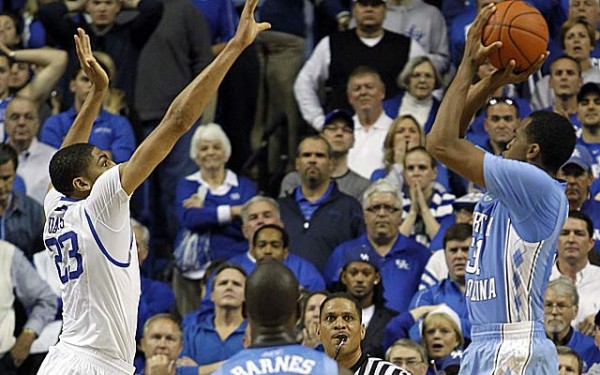 We are less than 48 hours away from the beginning of the greatest sports jamboree known to civilization. March Madness will finally be here with all its splendor and glory, as brackets will be laid to waste and teams will be shown the exit door. Of course, it seems whenever this happens, I get bombarded with the question, "Who's gonna win?"

Truthfully, I have no idea. (My best guess is at the bottom.) However, I enlisted ten of my favorite online rockstar friends who might be able to share their wisdom and knowledge on who will win the pretty trophy at the big dance. Check out their thoughts, and let us know who you think will win it all.

Mike Felder, EIC of In The Bleachers - "I'm going to pick Kentucky to win this thing this year. I think Calipari is a boss, and he's overdue. Only so many bad things can happen to him, and I think after the way his team imploded in the John Wall year and how KU miraculously stole the game, he's going to finish the drill. Take that with a grain of salt, because I have seen Kentucky as much as I've seen every other team in the field play this year; zero minutes."

John Gotty, EIC of The Smoking Section - "I'll go with my beloved Syracuse Orange since we have several key components for success: A big man to anchor the already aggressive 2-3 zone, experienced upperclassmen and strong players at each position, not just one star player. Plus, they've been tested - on and off the court - but always kept their focus on the main thing - winning."

Zosimo Maximo, VP of Content of STACK Media - "In the finals, we'll see a rematch from last year's tournament pitting favored Kentucky Wildcats against The Ohio State Buckeyes.  The nation's best freshman and sophomore's will battle it out, but it will be Ohio State's senior William Buford who will lead the Buckeyes to an upset win over the Wildcats."

Jay Anderson, Contributor to HuffPost of Black Voices - “I’m obviously biased here, but I’m picking my Tar Heels. Our bracket features two flawed and beatable teams in Kansas (#2) and Georgetown (#3). Once we reach the Final Four, we’d presumably be paired up with a Syracuse team that’s vastly overrated. On the other side, there’s an inexperienced Kentucky team that we came one Anthony Davis block from beating on their home court, and a Michigan State squad that we trounced on an aircraft carrier (on an aircraft carrier!!!) to start the season. So, no; I’m not really scared of any of these teams. All of this, obviously, depends on star big man John Henson being 100% healthy after suffering a wrist injury in the ACC Tournament semis. If he’s ready to play, there’s no team that can match up with UNC’s frontline. No. Team. Period."

Ben Osborne, EIC of SLAM Magazine - "Kentucky's going to win, because they have the best players, and because it's going to be awfully awkward to have Coach Cal take the Net job without winning a title first."

Mark Trible, Contributor of The Checking Line - "North Carolina, because a team that loses to a team by 33 points is due to win it all sooner or later, right?"

Joshua Lazard, EIC of The Uppity Negro Network - "I gotta go with Mississippi Valley State.  I wouldn't be a good uppity Negro if I didn't go for that lone HBCU that always seems to make it into the starting bracket. Will I be placing any bets?  Hell no. I got bills to pay around here." 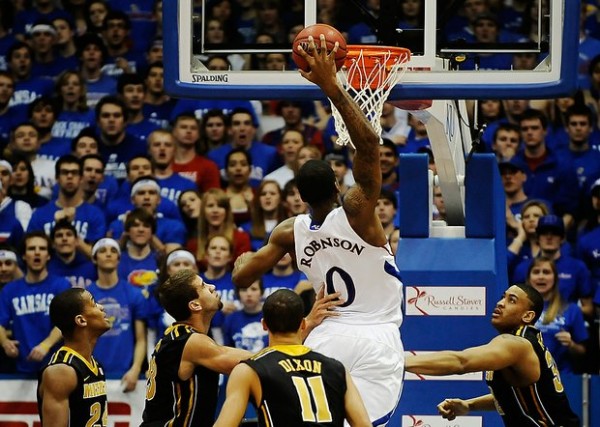 Anthony Ramsey, EIC of Los That Sports Blog - "I'm rolling with Kansas. Thomas Robinson is an absolute beast, Tyshawn Taylor finally coming into his own and they have enough outside shooting and size to keep teams honest. Their biggest test will be getting past UNC, which could be the game of the tourney."

Joe Boland, Contributor of The Sportsfan Journal - "I'm not gonna lie, I tried my hardest to somehow, some way, get a match-up of anything other than North Carolina-Kentucky in the final. But I just couldn't perceive a way, so long as John Henson is healthy, of that game not taking place, and I really hope it does — not just for my bracket's sake either. I want to see this rematch, because the first meeting, way back in December, may have been the best college basketball game of the year. And you know, I'm picking the same result. Kentucky edging out UNC in a close game, mainly because I've seen UNC lose its defensive focus too often this year, whereas Anthony Davis never allows the Cats to get soft on that end. Oh yeah, and Coach Cal is bound to win one one of these days, right?"

Eddie Maisonet, EIC of The Sportsfan Journal - "The Dancing Bear #DRAYMOND Green and Tom Izzo will prove that being a seasoned group with a quality head coach will prevail over teams loaded with youth and teams who run a cowardly zone. A versatile, if not bruising frontcourt, along with guards who can all handle and dribble/drive, these Spartans will be out to avenge their early season losses."

Out of talented ten, the selection process broke out like this...

Kentucky seems to be the runaway favorite, but what about you? Who wins the 2012 NCAA Men's Basketball championship? Let us know in the comments.