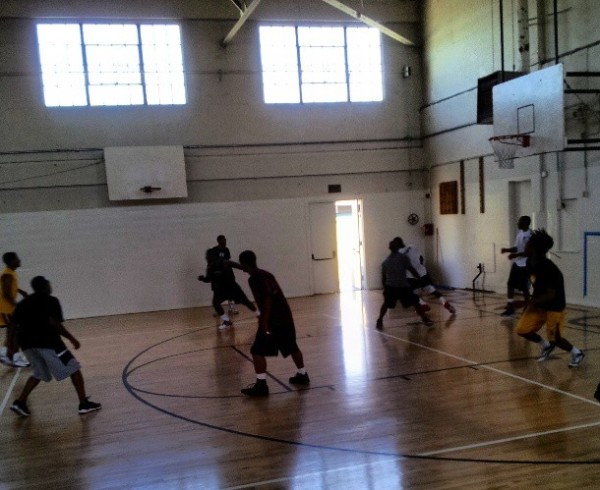 I've been toying with the idea of doing a journal of sorts chronicling my return to playing pickup basketball. As I write this post, I am one day removed from my 30th birthday, and as such I'm partially motivated to do this to make sure that I can do things in my 30's that I could do in my 20's. (My other motivations? Lose weight. Fellowship with friends. Being productive on Saturday mornings. Relive my glory days as being the second coming of Sam Perkins. Stuff like that.) My ritual on Saturday's are usually the following:

3. 15 minutes of stretching. (The stretch game when you get older is REAL! You all remember the days when you could roll out of bed, put on some hoop shorts and ball for 2-3 hours? Nowadays, if I don't legit stretch for 15-20 minutes, the consequences could be hazardous.)

4 . Two-plus hours of basketball is played. Most times we will fun 5-on-5. Sometimes if the numbers are low, 4-on-4. Always full court. I always dread it, but I always appreciate it in the end.

5. At around 11:30-noon, basketball playing ends. Three things might happen after hooping: Food consumption. Quick shower and then a haircut. Nap.

So there it is. That is how my Saturday mornings usually begin and end. Today, I will be letting you all inside the gym by sharing my personal thoughts while sweating my life away and the interactions that take place while playing ball with many of my friends. Let's tip off.

My right ankle has its good days and not-so-good days, as it's been about 18 months since I broke my leg slipping on some ice in Cincinnati. (One more reason why I now live in the Bay Area) When I wake up in the morning I can usually tell how it'll feel, so today? It felt cool and thusly I believed that I'd actually be able to play worth a damn today. Feeling confident, I put these on today. (The shoes, not the asian chick.) Like the person who wears #13 or decides to run under ladders, I'd throw caution to the wind and wear the shoes Derrick Rose calls his own. Not gonna lie, as soon as I put them on and laced them up, I almost twisted my ankle in a pothole outside my crib. I thought I was going to die.

Anyway, we get to the gym and there are about 12 guys there, which is perfect. That means that full five-on-five can be run and then some rest can be given out on occasion for those who lose. Once teams were picked, the first game began. (First to 12, 1's and 2's, win by 2.)

Good God that first game was the longest game ever.

It was ugly at first. The other team got out on us quick, as we were down 6-2 midway through the contest and we couldn't make a shot. I couldn't make a damn shot to save my life, as my parabolas were consistently missing the mark. As the game progressed we were still down 9-5 and things looked bleak, and then it happened.

No, not gunshots, but threes being drained from deep. Our sharpshooter Bell got two off in succession and I was able to knock down a Bruce Bowen-esque corner three to give us an 11-10 lead. Our confidence was sky high and we had this game won. Of course, what do we do once we get the lead? We (okay, I) turn the ball over trying to do more than what's in our skillset and we leave the door open for our opponent. However, our ineptitude must've been contagious, because the other team also began bungling the basketball and failed to capitalize. This must've lasted for a solid 20 minutes, and the score inched to us being up 15-14 with the ball in hand. No lie, but I'm pretty sure we ran the picket fence play for our shooter in the last possession as Bell ran off of 3 screens for a sweet bank shot to win the game.

I was so damn tired I didn't even give one damn. I went immediately to the sidelines, grab the Gatorade and drank 3/4th's of it while gasping for air. This fat ass was gassed.

But hey, we won the game. That's all that matters. We were still on the court and I didn't want to get off anytime soon. So when game two started I figured I'd pace myself and pick and choose my spots where I'd exert my now depleted energy tank. Unfortunately, the game of basketball doesn't give a got damn when it might be appropriate to catch your breath during the game, and either you react or you get beat.

Midway through game two, I got elbowed in the ribs. I literally couldn't breathe. I wanted to fight but it was my frat brother and he didn't even realize he did it. Right at that point the ball was deflected and the fast break was on for the other team. I sprinted back and did what any person would do when you're one-on-one with someone driving to the rim who's bigger than you, I fouled the shit out of him. I did man. I felt bad about it too. He got up quickly and was like, "I'm cool." He's lying, I'm pretty sure I concussed him, but whatever.

Just like that though, we stole the ball and we were running. Inexplicably, I was running the lane on the right and got the rock a bit earlier than I expected. (Okay, I wasn't expecting to get the ball, whatever.) There's that awkward moment that happens when you elevate towards the rim and you realize that this might not end well, because I was about 2 feet further from the rim than I realized, and my vertical ain't what it was. (FWIW, I had Zach Randolph hops in my prime) Meanwhile, I had to lean a bit and finish this layup and I ended up putting up real high off the backboard. That thing must've hit the rim 38 times but it went in and embarrassment was avoided. Praise Jesus Shuttlesworth.

With those two wind sprints ran, I was suddenly quite fatigued. Couldn't run for anything and was hoping the person I was guarding was also not in a hurry to run end to end consistently. He wasn't, so yay for me. But don't trip, I wasn't going to let my lack of wind ruin my desire to be a gunner and get my shots, as the ball swung to me at the top of the key and I let it fly from DEEP.

That thing was in the air for so long, and of course it went off the glass and in. All I could do is sheepishly grin and get back on defense while shrugging like MJ did during Game 1 of the Blazers vs. Bulls series back in '92. I was winded.

We won the game, and I went outside to get some air. Could I play another game? Would I be worth a damn if I did? Are there any oxygen tanks near? Game three started and I was total horseshit. I air-balled my first three. Clanked my second. Got in the post and was wide left on a turn-around jumper. We were getting smoked and I had nothing. This wasn't going to end well.

I got my second wind.

Maybe it was because I ate two pieces of toast and a plum this morning, or maybe it was because I had multiple whiskey drinks the night before and I'd finally sweat it all out, or maybe all those other games of pickup I'd been playing for two months were actually beginning to pay off, but whatever it was I felt okay. Yes, I was still tired, but there was something there that allowed me to focus and play hard again. With my shot being quite errant, I began finding teammates and we began to came back. We didn't win the game but I didn't care. I was ready to run again and felt a sense of achievement.

I've always been a larger guy, but being able to play 3-4 games consecutively without being tired had been the standard. When we started playing pickup ball back in June, after game two I wanted I was ready to shut it down. Today, I was headed into our fourth game and felt okay. A sense of progress had been made.

After the fourth game, the run was over and daps were exchanged. Plans for the evening were made, bickering about missed layups and questionable foul calls was had, and cell phones with missed calls/text/tweets were checked. The group of men varying in age from 25-40 would vacate the premises to make way for a youth basketball team who really knew how to play basketball, and everyone would go their separate ways.

"Same time, same place. See you next Saturday," someone yelled out of their car while I left the gym.

A wave and a head nod was sent back. It's on my calendar, and I'll be back hoping to find that second wind again.