The #FS1OpeningDrive tour bus has arrived in Salt Lake City for the big game! We have provided almost two weeks of news, commentary, tidbits and whimsy surrounding our tour stops, as we are ready for Michigan vs. Utah, tonight on FOX Sports 1. Get excited.

One thing I've noticed while traveling through 24 states in 12 days on the HarBus is that Michigan Wolverines fans are everywhere. A couple of examples:

One thing is clear, Michigan football is back and better than ever, even if the Wolverines haven't played a game yet under the new regime of Jim Harbaugh. Wolverine fans simply believe that their time is coming once again, and their prodigal son will be the one to take them back to the promised land.

The philosophy of Jim Harbaugh begins its ultimate test

Wherever he has decided to set down and ply his coaching craft, he has found a ton of success. From his beginnings at the University of San Diego, where he took a decrepit program to a 29-6 record in just three seasons, to Stanford, a program that had been stuck in the mud, and converting the Cardinal into Orange Bowl champions. As the hot commodity that he was, Harbaugh took his talents to the San Francisco 49ers, where he went to three conference title games and had a 69 percent winning percentage in the process.

This is undeniable success from a man who's found a way to win wherever he works. Moreover, wherever he works, he also leaves the place burning from the ground up with everyone in the organization ready to get rid of him. This is a story known all to0 well by anyone familiar with Harbaugh and the game of football. 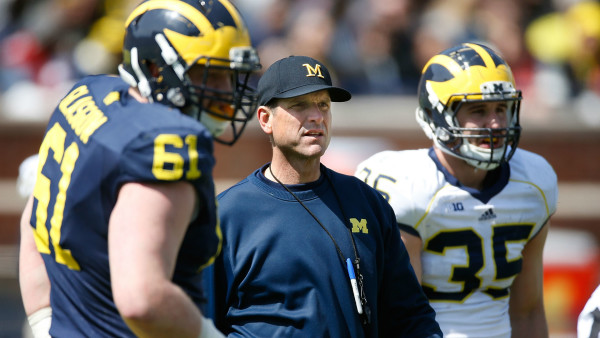 Now he's taking on arguably his toughest task, as he is in charge of rebuilding his own school's storied program, the Michigan Wolverines.

In reality, the Michigan Man's new job isn't quite rebuilding something from the ground up like he did in his previous stops. The Wolverines aren't a dilapidated program, but they certainly have fallen from the upper crust of the college football hierarchy. Seven- to eight-win seasons just aren't going to cut it at Michigan, as Rich Rodriguez and Brady Hoke had to find out firsthand. There's talent in the pantry, there's resources available to be used at Harbaugh's discretion and most importantly ... there is no one stopping Harbaugh from being as weird as he wants to be. A few examples:

Trust me, that's a very truncated list of Harbaugh's weirdness.

Here's the thing — that Harbaugh quirkiness is having a positive effect on the program. These millennials for some reason think that the coach's hijinks are cool, and they're beginning to buy in to what Harbaugh is preaching.

"He's energetic, and he's passionate," Michigan defensive back Blake Countess says. "He's going to let you know how he feels. If you have a coach that's always wired, it'll make you pick it up and finish, especially when it's the head coach."

That's the tightrope that Harbaugh has always walked as a head coach, as the leader of young men will burn the midnight oil to get the absolute most out of anyone he coaches up. There's a genuineness in that devout sense of teaching, and it can become infectious to those not used to a coach so willing to display the "right way" on how to do things.

However, calling it a tightrope might be unfair. At Stanford and San Francisco, calling it a tightrope was probably appropriate, as those in higher power than Harbaugh were never going to be as willing to deal with the shenanigans that came with him as the head coach. At Michigan? It's much more of a delicate dance, as Harbaugh is both critically acclaimed and a hometown hero of sorts. He might have the longest leash in the country to do whatever it takes to turn Michigan into a winner.

All Harbaugh has to do now is roll the balls out on the field and set the Michigan football program back in motion versus Utah. Win or lose, Harbaugh will be graded not simply by wins and losses, but by our ability to see visible progress. Can Harbaugh find his quarterback of the future? Can the running game become a threat like at all of his previous stops? Will discipline and attitude be the calling cards of this new Harbaugh team? Will Harbaugh make us care about Michigan football again?

Well, he's already got that last one covered, and he hasn't even coached his first game yet.


The tour is complete. Use the hashtag #FS1OpeningDrive and follow us on Twitter at @edthesportsfan, @yardbarker and @FoxSports1 for more updates on the tour, as we prepare for Michigan vs. Utah, tonight on FOX Sports 1.