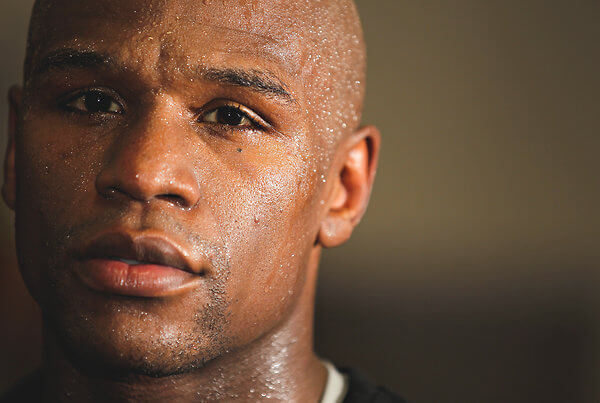 It's Friday, and in most cases, this represents the end of another long, grueling work week. Happy hours are on the horizon, and the start of 48 hours of ecstasy are staring us directly in the eye. Fridays are great to begin with. Yet today, August 3, 2012, is in essence an unofficial thug holiday. It's a day that calls for nights to be celebrated with the closest of friends around the nakediest (no, that's not a word, but it is now) of strippers with the finest of alcohol. Pop a bottle, smoke a loud pack, grind against something curvaceous and tell her in another place, at another time that if Sallie Mae didn't have you by the balls you two would be perfect for one another. But instead you just want to make tonight last forever because it symbolizes a moment in time which will not soon be forgotten in American history. What's so glorious about this certain day? I'm glad you asked.

Floyd Mayweather is a free man after serving what was roughly two months in a Las Vegas jail. And if that's not cause for a celebration, then quite frankly not much else is either.

First things first, no one employed or affiliated with The Sports Fan Journal advocates domestic violence. It is, indeed, a very real issue plaguing America and one which likely hits home for damn near everyone reading these words. Still, Kenny, Ed and myself are three of the biggest Floyd Mayweather fans on the face of this beautiful planet the hands of God created. Last week, I reached out to these two telling them we had to welcome Floyd Da Gawd back in style. And not just with a regular "hey, Floyd's great" type post. Nope, that just wouldn't fly.

So after some soul searching, we came to the consensus that we'd craft a six-step manual for how the second greatest boxer behind Muhammad Ali should enjoy his newfound freedom. Some are lighthearted and comical. Some come with a more serious backbone. But all of them need to happen. Without further ado, ladies and gentleman, Kenny Masenda, Eddie Maisonet and myself, Justin Tinsley, would like to welcome you to The Floyd Mayweather Welcome Home Appreciation scripture. 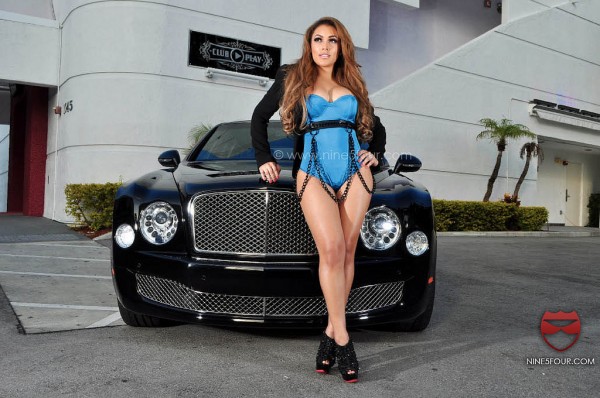 1. Spend Some Quality Alone Time With Miss Jackson - When a man has been away for a while, whether it's due to a hard day's work or, in the case of Floyd, some hard time, then the first thing he wants to do is go lay on a woman's butt. However, it is not that simple. Everything from the scent of her hair to the switch in her walk ,to the gleam of her teeth, to the first words when she talks ... even when she gets on your nerves, you've been away from her for so damn long that all you want, in the words of The Great Philosopher Marcus Burnett, is some quality time. God bless Miss Jackson, and I hope she's ready, because it's goin' down in the Mayweather household when Floyd gets back. -- Kenny 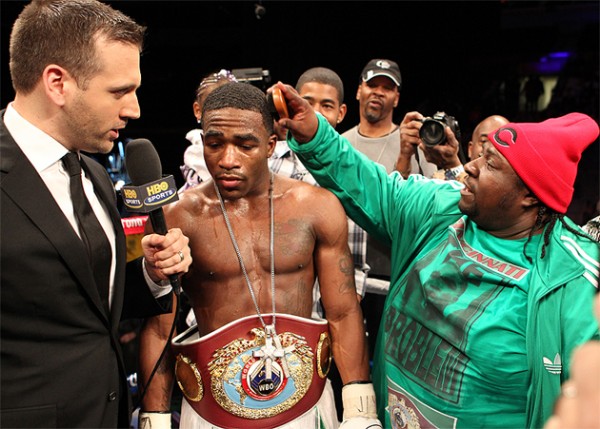 2. Belittle Adrien "The Problem" Broner - Cincinnati's own Adrien Broner is one of the best young prospects I've seen in the boxing game in a long, long time. Saying that the man reminds us of Floyd Mayweather isn't a form of disrespect to Money May in the slightest. Broner's style mimics Mayweather's in ways that Kobe's game mimicked Jordan's. Is Broner on the level of Mayweather? In two words let me say this plainly, hell no.

Sometimes the elder statesman has to check the young fella as a sign to make the underclassman know that he's still got some things to learn, some humbling to experience, or the simple fact that he just ain't good enough. For Floyd, it can come in a variety of ways. He could publicly berate Broner as he's brushing his waves in the middle of the ring, he could totally ignore any and everything that Broner does in paying homage to Floyd, or ... he could schedule an upcoming fight with Broner, just to put the youngster in the blender.

It'll make or break Broner, but for Floyd it's just the way things go for the old man hanging on at the mountaintop. - Ed 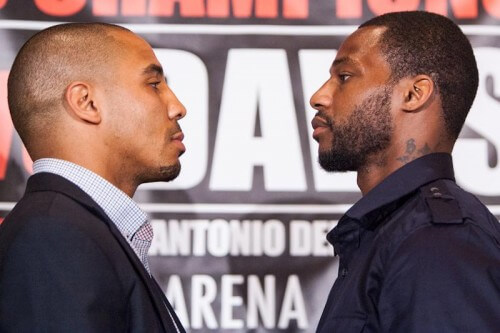 3. Crash The Next "Mega Fight" - The next mega-fight, well, the one I care about, is Andre Ward against Chad Dawson. Both of these guys are legit as they come, and both have plenty to gain with a victory. Hell, even if they draw, it's still a win, simply due to the fact that it could present a second bout.

With that said, this fight lacks something and it's very simple: star power. While both fighters have amazing track records, the mainstream public, for the most part, doesn't know who the hell they are. That's where Floyd comes in.

Never mind the fact that Floyd isn't in their division. It's not like I'm suggesting that Floyd fight either of them; instead, let's just make their 24/7 more interesting. Have Uncle Roger on camera break down each fighter, only to conclude that neither of them is as good as his nephew. Have Floyd Senior talk about how much this fight means to boxing, only for him to go back and say that both of them, put together, can't draw as much as his son on his worst day.

To top it off, have Floyd do whatever he wants. Shoot, have him feed food to the homeless or have him draw a couple milli out of the bank, just because. Have him slide down a mountain of money like The Joker in The Dark Knight. Just have the man there.

Is it over-the-top? Sure. Disrespectful even? Probably so, but at this rate, it doesn't hurt to do whatever it takes to give this fight the attention it merits, and if that means calling in a favor from a newly freed Floyd, then, dammit, that's what's gonna have to happen. -- Kenny 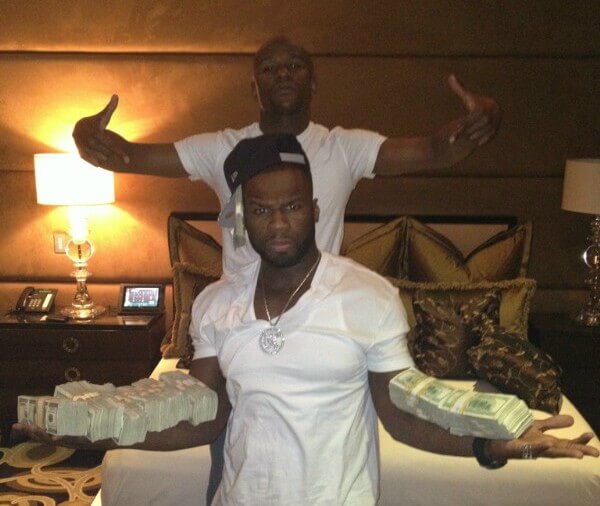 4. Record A PSA Directed Solely At Manny Pacquiao -  Let's get one thing clear. Some of the best Floyd moments come far, far away from a boxing ring. It's when a camera is in his face where he has actually created half of his legendary persona. So here's the thing. Everyone still wants to see Mayweather/Pacqiauo regardless of how much they moan, groan and bitch about how much they don't. Trust me, they do. It's not like they wouldn't watch, you know? Do you realize how truly great fight watch parties all around the country would be? Plus, not to mention Floyd and Manny would be earning north of $40 million. So yeah, it's going to happen at some point during the next year. With that said, why not go ahead and get 24/7 started up early? Floyd's a businessman, so if he's thinking on his feet, he should try something like this. Start your own YouTube channel, upload a video taunting PacMan every two weeks or so and get YouTube to pay him by the click. Or better yet, start your own site and upload the videos there and get paid from advertising. Boom, boom. More money in the pocket for the HNIC of the Money Team. And we get to hear the greatest trash talker since Gary Payton give us more tweets and Facebook statuses than we truly know what to do with.

In addition, while 50 may be a shell of his former self MC-wise, make no mistake about it the man can still spew venom with the best of them. Floyd + Curtis + talking cash money sh*t for six to seven straight minutes on camera while counting money? Someone needs to get on the horn right now and inform me why exactly this hasn't happened yet. -- Tins 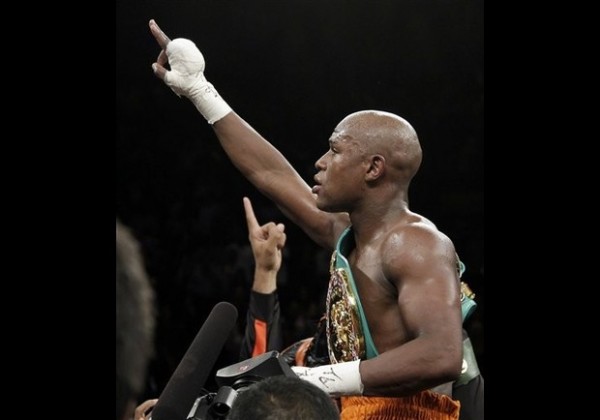 5. Fly TSFJ To Vegas For His Next Fight - This is a Stretch Armstrong reach if there ever was one, but here goes nothing. The media hype beast in all of its glory will be at Money May's next fight, so it's not like he'll need any additional coverage. But would he have fans there covering him? You know, the guys who can really kick back and tell the story of what really went down in Vegas from a non-AP side. On their own radio show/podcast at that! The guys who can tell the story of what the city is like hours leading up to a fight featuring the safest bet in all of professional sports. The guys who can say their diet over the course of the entire weekend consisted of nothing but cheese sticks and Jack Daniels Honey. The guys who can tell the story of how they partied with The Money Team only minutes after Floyd's victory over Fighter X and and witnessed Floyd and 50 drop $600,000 in a Las Vegas strip club in just under 30 minutes.

Floyd needs those young, hungry individuals documenting his post-prison legacy. So, having said that, Floyd, allow me to introduce you to myself, Kenny and Ed. We're those guys. Seriously, if you could cover the flight, hotel rooms, entrance into the fight and possible VIP access to wherever the victory party is, I'm pretty sure we can all buy our own drinks. Hell, we may be able to finagle a plane ticket our damn self. We'd come to work, too. I know it's asking for a lot, but, man, we're broke and all we want to do is cross an item off our bucket list. And I say rooms because we're all 25+ years old. Trust me, we're trying to win when we're in Vegas. -- Tins 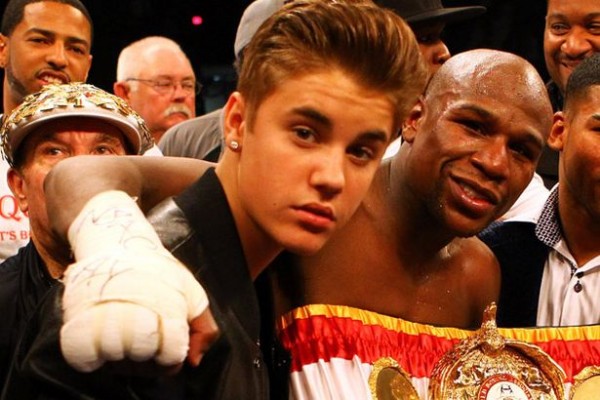 6. Let Kenny, Ed & Tins Carry The Belts To His Next Fight - Floyd, hear me out kinfolk. See, I've seen a few of the folks who you've had bring the belts out in the past. 50 Cent. Triple H. Hell, when Justin Bieber came out rocking the leather and gold I was taken aback in sheer shock and amusement. Damn Floyd, you really pulled the okey-doke this time on all of us.

However, to show the people, because you are the people's champion, that you are a rehabilitated man and you are a man of the people, consider this an offering of three individuals who respect the brand that is Money May. See, you've had stars hold those belts in the past, but you know what ... they were too busy trying to look cool and keep their level while you were about to put on a grand performance in front of millions of people. Naw man, Floyd listen, the three of us will be on levels of shenanigans and tomfoolery that our mamas might get upset at what they see. We're sipping Henny out the bottle. We're pulling women out their seats. We're doing the Cam Newton TD celebration dance (you know, the guitar solo into the Superman?) with the belt. We're doing anything and everything to let these people know that we're in there for you.