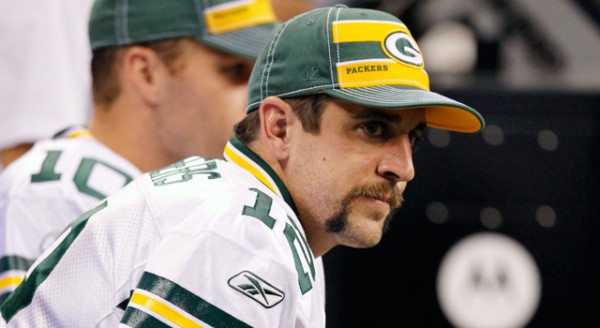 There was a time when I thought that Aaron Rodgers was just another up-and-coming quarterback in the NFL; you know, along the lines with a Philip Rivers, Tony Romo, Matt Ryan and other QBs who hadn't quite made the leap to Brady/Manning/Brees/Roethlisberger territory but was still a franchise-building QB that your team can believe in.

I never envisioned in the 12 months of the 2011 calendar year that Aaron Rodgers would go from an above-average QB to legitimately the best player in all of football.

This conversation can't happen without a discussion of Brett Lorenzo Favre.

Yes, the mere thought of hearing the man's name can cause folks to cringe in disgust or sneer in anguish. The mention of #4 causes such a reaction, because if we did this top five list 3-4 years ago, Lorenzo Favre would arguably be #1. The adoration and adulation for the man was inescapable, broadcasters (Joe Buck) fawned over the man and turned typical fans into Stans with one ridiculous sling of the pigskin and post-touchdown celebration that would include picking up wide receivers over his shoulder and insane butt-slapping that was totally acceptable. He had the old man graybeard, didn't shave and showed up to games looking like he hung out with Stone Cold Steve Austin and knocked out a six-pack prior to kickoff.

He was the essence of cool, and he relished in it.

That relishing led to the ultimate demise of Lorenzo in some folks eyes. Oh, the true lovers of all things Lorenzo didn't care if the man was throwing fastballs to high schoolers while "thinking" about coming back to play football. Loyal Favre fans didn't mind him holding football teams hostage while debating a return for the umpteenth time. They didn't care; the Favre fix was needed, and they needed a hit. Of course, Favre wasn't "beloved" by everyone, and folks began to turn on him. They hated him because of his antics, and they wanted him to finally retire and just go away.

In this day in age, once you become inundated with something too much, especially in the 24-hour news cycle, there are times when you just got to go.

For Packers fans, Favre seemed essential. No one could see past Lorenzo, and who could blame them? So when Aaron Rodgers came into the fold, expectations were at an all-time high, yet low at the same time. The Packers were talented and had achieved continued success under Lorenzo, so the expectation was to keep winning. Still, it's Brett Lorenzo Favre. A friggin legend. Who in the hell is Aaron Rodgers? Isn't he the guy who got left in the green room for five hours waiting for his name to be called? Let's just hope he can complete a few passes. 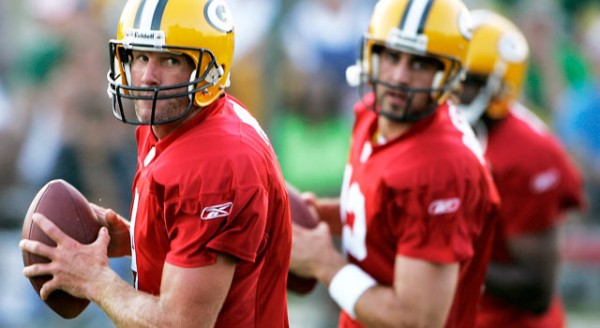 What Rodgers showed us in the first few years after Favre was that he's a pretty damn good quarterback. When he started achieving success, all the media ever wanted to do is bring up Lorenzo. Time and time again, Rodgers would defer, speak highly of his mentor and focus on the objective at hand. A quiet confidence began to show from Rodgers. The more he sat in the captain's chair, the more he understood what was going on around him, and the more he began to lead, the more he began to realize how essential he really was.

Here's a chronological breakdown of the Rodgers season with a few key notes:

January 2011: Rodgers helps lead the sixth-seed Packers onto a blaze of glory towards a Super Bowl. Rodgers plays lights out, seemingly being a maestro on the football field. Whenever Rodgers would score a TD, he'd do his "championship belt" celebration, symbolic of the goal the team had all year. We need that title around our waist, and that's the only objective that matters. (This of course resulted into the "Discount Double-Check" phenomenon by State Farm, which got Rodgers paid and brought into the national spotlight even more. Good for him.)

Summer 2011: The lockout occurs. While players across the league are conspiring about linking up to throw the ball around and stay in shape, the Packers famously came out and basically said, "Nah, we're straight. We're chilling." Making the point that the need for extra camp was pointless and unnecessary for them. This baffled me. I couldn't believe it. However, Kenny made a great point that I hadn't considered. Outside of Lorenzo, the Packers roster had stayed relatively the same for years. They had a continuity and chemistry that other teams marveled at. It would be exactly what they would lean on once football started again.

Throughout the entire time this year, Rodgers hasn't acted any different or changed how he does things since he got to Green Bay. Still a quiet guy, leads by example and believes in his guys.

He is his own man, and I'm sure Packers fans wouldn't have it any other way.