At this point, it might be to our benefit to just act like the NBA doesn’t exist. Between the owners offering ultimatums to the players, to the players disbanding their union, and the NBA threatening to void all contracts, I’m here to tell you that you might want to focus your energies somewhere else this basketball season.

The talent pool in college basketball figures to be well-stocked this season, as many of the college stars from last season decided to return to school, due to the foggy prospects of a 2011-12 NBA season. The traditional powerhouses are loaded, and the underdogs are primed and ready to shock the world once again.

Justin Tinsley and I have collaborated to compile a list of the seven most intriguing games in college basketball this season. Enjoy.

All ranks are based off of the Nov. 14th ESPN/USA Today Coaches Poll

Why You Care: Its a shame, really. The truth of the matter is this might be the best game played in “The Garden” for a long time. The Garden has always been known as The Mecca of basketball, with the Knicks serving as gracious hosts and stars lining the court much like deacons in the front row of a church. The Garden would be filled with rabid basketball fans like the congregation would be waiting on the preacher to deliver the word. Let the church say Amen! (Sourced from Ed’s SB Nation post, “Enjoy Kentucky And Kansas In Madison Square Garden, Could Be The Best Game There For Awhile.”)

Best Pro, if the NBA Existed: If there was an NBA, Terrance Jones would be the best pro, even though he reminds me of a blend between Lamar Odom and Rashard Lewis. Scary, I know. 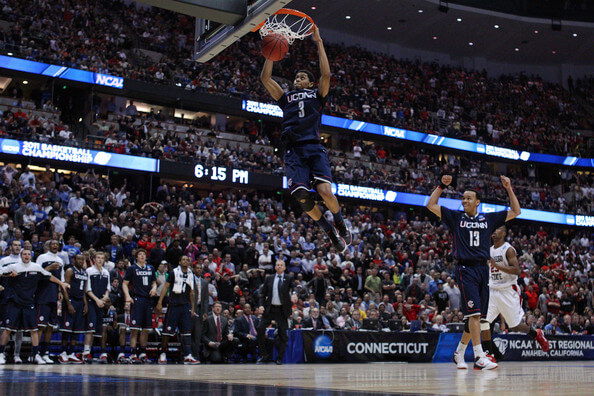 Why You Care: Because this will be one of the last times you will see these two teams as apart of the Big East conference. Sucks right? Of course it does, so savor this match up in all of its intended glory while you can.

Best Pro, if the NBA Existed: I respect the fact Scoop Jardine made serious strides once given the opportunity to start last season. I bet you didn’t know he led the entire Big East in assists last year and he’s only poised to pick up where that left off last year. Yet, if we’re talking about pro potential, there’s one name who shines brighter than cop lights after a night of drinking: Jeremy Lamb, ladies and gentlemen. Jeremy Lamb.

Winner: UConn, behind one of Lamb’s best outings of the year. 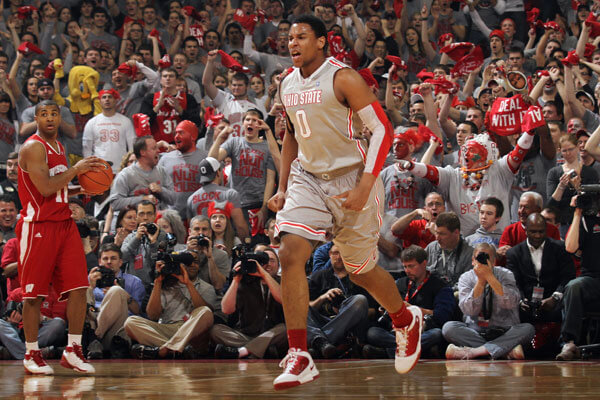 Why You Care: This is the game that Ohio State needs to win, so that people can actually believe in them. Ohio State’s been good for a long time now, but there’s something about the Buckeyes that leaves me unconvinced. Its not that they aren’t talented. Jared Sullinger is the best big man in America, and the duo of Aaron Craft and William Buford could be the best backcourt in the Big Ten. It’s the fact that they play in the Big Ten…the most moribund and decrepit conference in all of college basketball. This conference should be referred to as “three fouls and a cloud of dust.” Duke has the Plumlee brothers…not so sure what that’s supposed to mean…but Sully will be a bully on the block versus the Blue Devils.

Best Pro, if the NBA Existed: Doc’s boy, Austin Rivers. Not only is he light-skinned, but he’s playing under the tutelage of Coach K. Its the reason why pops sent him there: to be disciplined. He’ll be a refined pro prospect after one year in Durham. 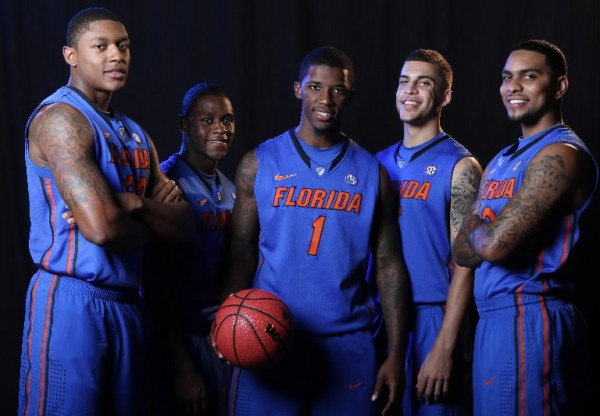 Why You Care: Because you want to see how a new-look Arizona Wildcats team will look. ‘Zona crept up on some people last year, but don’t expect any surprises this year. What is sucks is the Wildcats will be without Lamont “MoMo” Jones, due his transfer to Iona for personal reasons, and Florida will be missing the silky smooth game of one of my favorite players from last year, Chandler Parsons. Still, you should watch for the point guard battle between freshman Josiah Turner (Zona) and Erving Walker (Florida). Plus, if the lockout is still going on by then, I suggest following Derrick Williams on Twitter. He probably won’t have a meltdown, but there’s always a possibility. Imagine if that guy didn’t go pro last year.

Best Pro, if the NBA Existed: Does Derrick Williams count since he’s technically not in college, but he has yet to play a second of professional ball? If he doesn’t, it’s a toss up. Erving Walker is a scorer, and if you can score in the NBA, you’ll always have a job.

Winner: Florida has shooters and Kenny Boynton can give hell on defense (just ask Jimmer Fredette and Brandon Knight.)  I’m going with the Gators.

Why You Care: Because the best mid-major (even though X fans hate to hear it) in America and the most surprisingly good team in college basketball reside in the same city. Cincinnati is home of The Crosstown Shootout and, to be fair, the Bearcats and Musketeers campuses are right up the street (four miles) from each other. This Xavier team simply overachieved last season, as Tu Holloway lead a depleted roster to a 15-1 conference record and a 5th consecutive A-10 championship. X has retooled and reloaded and are ready to avenge their 20-point loss to the more physically dominant Bearcats. UC somehow put together a 26-9 record with a bunch of guys you’ve never heard of and now they’re ranked No. 20 coming into the season. Yancy Gates is the most talented player on the roster and, last year, played like a man who will be playing in the NBA (you know, if the league existed.) He has a tendency to not show up in big games, but if he does, it could be a long night for Xvier.

Best Pro, if the NBA Existed: Make a mental note: freshman Dezmine Wells will be a top 10 pick in 2013. Don’t believe me: check the YouTubes.

Winner: The stars usually come out in the big games, but even the star needs a supporting actor. Dennis Dixon is good, but Mark “Cheeks” Lyons might be better. Xavier wins 75-71. 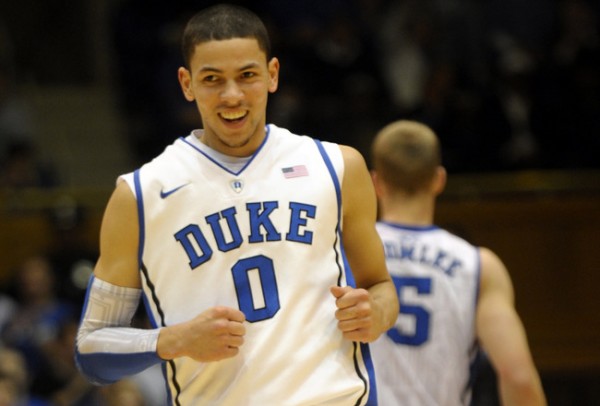 Why You Care: Because it’s the last regular season stop on the Harrison Barnes World Tour, of course. This is the last game of the regular season with rankings in the ACC tournament and NCAA’s on the line. It’s at Cameron Indoor, and if everything goes according to plan, both of these teams will be in the top five. And like I noted a few days ago, hopefully Barnes and Austin Rivers will put on a show that has all of us updating our Twitter feeds at a mile per minute.

Best Pro, if the NBA Existed: This isn’t going to South Beach and having your choice of women to take home, but there’s NBA potential littered in this game. It’s honestly too close to call, but it all boils down to Barnes and Rivers. I like Henson, but the track record of recent Carolina big men in the league the last six years (Sean May, Brandon Wright and Ed Davis) speaks for itself. Harrison is the potential number one pick (imagine if he somehow ended up in Washington with John Wall) and Rivers has a game that has the flair of one tailor-made for the pros. But since I already pledged my loyalty to the kid in Chapel Hill, that’s who I’m riding out with. 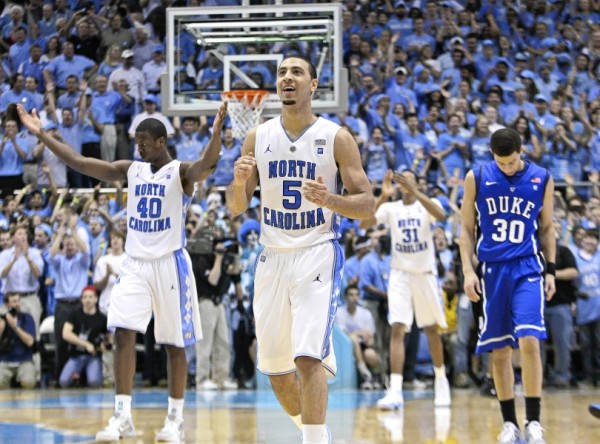 Why You Care: #1 comes to visit #2 in Adolph Rupp Arena…what more do you really need? Oh, that as many as ten players on these two teams could make an NBA roster in the next few years? That two of the greatest head coaches of our generation will be facing off in Roy Williams and John Calipari? No, none of those reasons matter. The reason why you care is because your boy Ed will be sitting on press row for the game. Yes, that has to be the main reason why you care. No doubt about it.

Best Pro, if the NBA Existed: Since our appreciation for Harrison Barnes and Terrance Jones has already been professed, I’m going to shine the light on UNC point guard, Kendall Marshall. Eerily similar to Jason Kidd in his court vision, lack of shooting ability, and his complexion, he’s a perfect fit for this team. If he hits the league with an evolved jumper, he’ll be an all-star.

Winner: After watching UNC struggle with Michigan State’s inside presence, along with Kentucky being at home, the Wildcats put the Tar Heels to bed, 88-81.

The 7 Most Intriguing College Basketball Games This Season