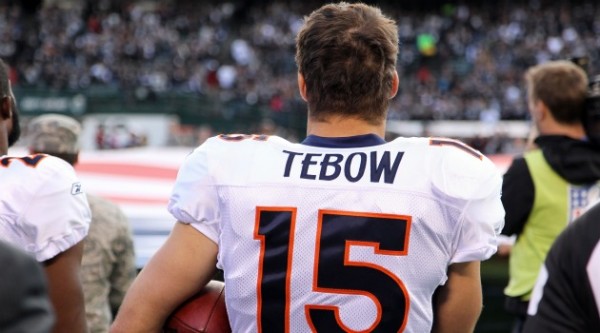 What in Lord's name?

Now, now, now…just relax and take notes for what is about to be said.

99% of the time, your grandmother would want you to carry yourself in a fashion quite similar to how Tim Tebow does. As for the remaining 1%?

Well, that would be the "getting tackled ferociously on the football field" part that grandma might not approve of.

And you know what? That's okay. Believe it or not, doing things that your grandmother might find cool is actually cool. If you have a religious  "gramma" like I do, then you know she'd appreciate any man who knows his bible like his playbook; who always takes the time to thank the Lord before moving forward with their tasks and obligations; who volunteers to help others less fortunate when time permits, even if that's performing surgeries with your bare hands in the Philippines.

However, that just scratches at the real cool of Tebow.

The coolest thing that I can appreciate about Tebow is the fact that he believes in himself to the highest degree, almost in absurd fashion. The amount of slander that has been sent his way, due to his lack of pure passing ability, has never fazed the man. In fact, I believe he relishes in it. So for every 3-of-16 passing performance, the singular belief that "I can help my team win a game" is still there.

Yes, his throwing motion is terrible.

Yes, he tends to be more willing to run than throw.

Yes, he reads the defense like any Dallas Cowboys quarterback post-Troy Aikman and pre-Tony Romo.

But Tebow never cheats you, you'll never feel like he didn't leave it all on the field, and that's something I can truly respect. Comparatively, remember the Donovan McNabb era in Washington and Minnesota, and think about how much Donovan didn't give a damn anymore. Maybe he was jaded by what happened in Philadelphia, but the thought of going out there and leaving it all on the field was past him. That's not cool one bit.

However, the one thing that's overlooked with Tebow, past his faith and his stance on the way he lives is....he's still a regular, competitive guy. The man still gets riled up, still looks up to other people, cracks jokes with his teammates and generally likes to have a good time.

Some folks judge a man by the thought of "I'd like to have a beer with him." Well, look; Tebow's not about to sit down and have a beer with you, but some sweet tea or a Gatorade will suffice. Tebow could come kick with me anytime. I might just have to watch my cussing a bit.