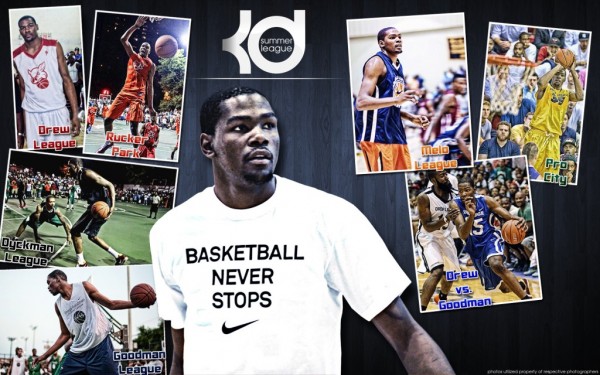 This post always had my name on it but, in reality, I never wanted to be the one to write it. It's not because I'm not capable of writing why Kevin Durant is one of the coolest motherfuckers alive. No...that's actually easy. It's the fact that writing this post without sounding like a complete and utter homer seemed insanely difficult.

We tend to use clichés like  "for the love of the game" when speaking about our favorite athletes, with the hope that our favorite players would go out there and love the game so much that they'd go out there for nothing and just play. Play like we did as kids; hooping at the YMCA, playing on your boy's driveway hoop or dunking like crazy on your NERF goal in your room. Playing the game with no thought about our next contract, no thought about a sponsorship deal and no thought about the other perks that come with being a professional athlete. As a sports fan, we want our favorite players to only care about the game, and the goal of getting better; nothing else. We want to be tricked into this ideal of commitment, desire and focus that this person is giving his all to the team we support and the game that we all have loved since childhood.

Kevin Durant showed the people that we don't have to be tricked, that he could be genuine to his craft at all times while not being considered hokey or a fraud in the process. That Kevin Durant could actually be The People's Champ, the one that when times were hard, he could be counted on to stay true.

From the 2011 NBA Playoffs, where Kevin Durant showed he could be a leader of men, taking them where they'd never been before, lifting his team to the brink of an NBA championship, dealing with egos and overcoming insurmountable odds. At 23, you're not usually looked at as the veteran leader of anything, much less a championship-caliber NBA team. Yet, that's what he did. Always sticking behind his guys, imploring them to do more.

From the 2011 NBA Lockout, where Kevin Durant showed he could be a leader by example. Going to any open gym he could find, playing in basketball game after basketball game for charity, all while getting a run in. From The Rucker, to Dyckman, to Drew, to Goodman...if they were hooping, he was there. When he couldn't get a game of basketball, then he'd go and play flag football with college students and chosen ones alike, for no real reason other than just the desire to compete.

From the 2011 Brand Hustle, where Kevin Durant showed he could love the game so much it could be marketable. "Basketball Never Stops" is the new slogan du jour for Nike Basketball, and their pitchman was a gangly 6'9" hooper who drove a conversion van looking for pickup games. From the preacher man to the truck driver, anyone could get a run with the People's Champ. If they couldn't get a game with him, they sure could wear his shoes, as his desire to put a sneaker out for less than $100 a pair is as much admirable as it is humbling.

So many people aspire to be what they think "cool" is, and the one constant about each of the five members on this list is that (the perception of) them being themselves is cool enough.

Oh, and Durant led the NBA in scoring and became the youngest player ever to win the NBA scoring title last season, made first-team All-NBA last year and turned the OKC Thunder into the scariest team in the league...and he's only 23.