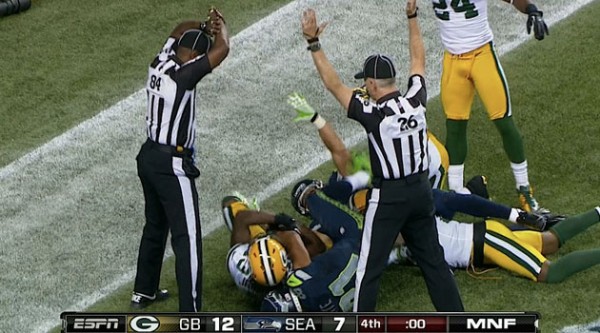 The Seattle Seahawks beat the Green Bay Packers 14-12 on Monday Night Football. Seemingly, the end result of the game is by far very inconsequential to everything that happened prior to the finale and everything that happened after the fact. By the time you read this, you will have seen the referees hijack blow the critical call as Seahawks quarterback Russell "Duke Cover Kit Model" Wilson threw a hail mary where Packers defensive back M.D. Jennings intercepted the ball and the game was over, right? Well, as you know, Golden Tate got his arms around the ball late, fought for it on the ground, and one referee signaled touchback and the other signaled touchdown. Later, the replay officials reviewed the play and called touchdown. The GIF-ulmation, courtesy of SB Nation.

Armageddon began to take place. No, not in the stands. Not in the Seahawks or the Packers locker room. Nope, but on the place where almost no holds are barred.

In particular, some of our favorite athletes decided to tell the world how they felt, and we were thoroughly entertained in the process. I present to you, the funniest moments of Pro Athlete Twitter Armageddon.

TJ Lang goes YOLO-mode on the NFL: These three tweets from the Green Bay Packers offensive lineman will pretty much tell the story, although some Packers fans would've liked Lang to block as stellar as he tweets, but I digress:

Got fucked by the refs.. Embarrassing. Thanks nfl

Fuck it NFL.. Fine me and use the money to pay the regular refs.

Any player/coach in Seattle that really thinks they won that game has zero integrity as a man and should be embarrassed.

It's the logical response for anyone to have when they're fed up. Unfortunately, with the monitoring of Twitter and other social media feeds, players never respond in such a fashion. Thus, making TJ's outburst on Twitter so friggin' epic.

Someone who goes by "Frank_Gore" might've said Roger Goodell was a white devil: A gentlemen by the name of @Frank_Gore put on a show last night on Twitter. Two tweets in particular set the mood right for Twitter Armageddon.

NFL can fine me, too. I'll wipe my butt with the money first! #RogerGoodell

Yo, I love all races, but the white man is the damn devil for tonight. Sorry, y'all, blame Roger Goodell!

There's no blue check by @Frank_Gore's twitter handle, so we should assume it's not actually the San Francisco 49ers halfback, but for 30 minutes this was the most hilarious thing ever for some reason. 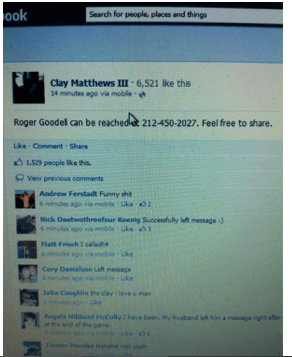 212-450-2027. I'm not going to lie, I dialed the number. It was busy. Apparently you all got something to say to Mr. Roger Goodell. Be sure to thank Clay Matthews when you finish.

Gary Payton threatens to take the gloves off with someone on Twitter: Gary Payton will always be considered one of the greatest Seattle legends of all-time. Being a resident of Seattle as long as he has, when the improbable touchdown was scored by Golden Tate, Payton celebrated with Seahawks nation. That's when things went downhill. 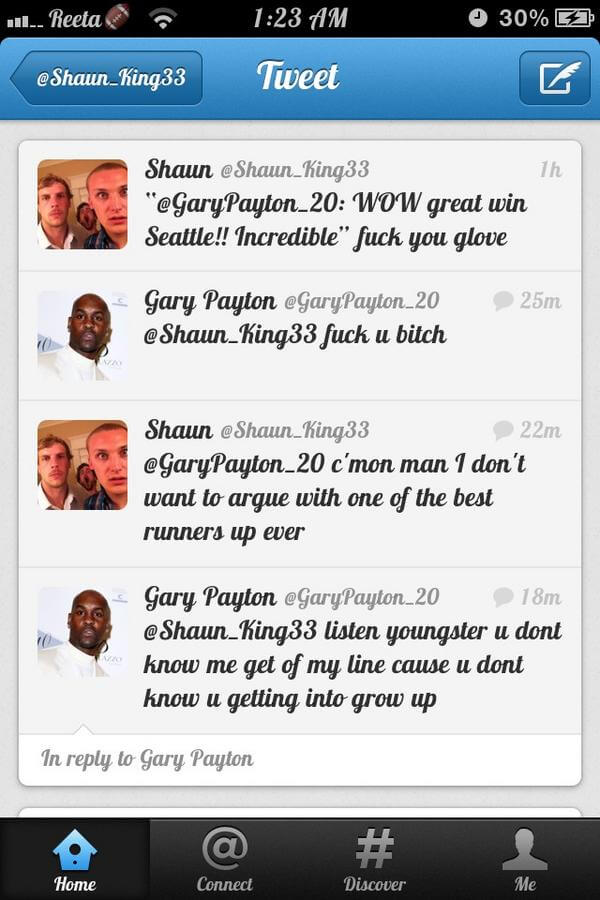 Kudos to Shaun King, not the former Tulane quarterback, for egging Payton and making the "Oakland" come out of The Glove.