I'm going to attempt to do a weekly power rankings of all the players, coaches and personalities that mattered (or didn't) during the 2013 NFL Playoffs. These rankings will have no statistical analysis behind them, outside of the amount of times someone may or may not have made my head hurt or eyes bleed while watching him on television.

1. Russell Wilson: Not only did the cover model for the Duke Texturizer Box put on another masterful display as the signal-caller of the Seattle Seahawks' 24-14 victory over the Washington Redskins on Sunday night … not only did the dual-alumnus quarterback get off a few wind sprints for 67 rushing yards, but Danger Russ also decided that he wanted the throne for the best lead blocking quarterback of all-time. The Seahawks play football the way it was meant to be played, and Pete Carroll wouldn't be able to direct his movement without Wilson's leadership at QB. He's #1.

2. Anquan Boldin: I'm not sure who the Indianapolis Colts defensive backs are, but it's probably good that I don't because Anquan was abusing them on Saturday night.

3. Richard Sherman: I tweeted on Sunday night that Sherman is evolving into the new generation's Chad Johnson. Cocky but confident, shit-talking but having fun at the same time, and yeah ... he's really good. Why is he #3 on this list? Because he got someone (Trent Williams) to muff him in the face and he just smiled like the true deviant that he is. All hail Richard Sherman.

4. Ray Lewis: 13 tackles versus the Indianapolis Colts in round 1, quite impressive. Ray Lewis hit his dance and groove at the beginning of the game, goosebump city. Ray Lewis hit the same dance in the victory formation during the final seconds of the game? That might be a bit much. Got damn Ray, some of us are trying to see you play four games, not one or two. Save some of that; we got bigger fish to fry.

6. Clay Matthews: The possibly illegitimate love-child of Latimer from The Program looked like he was in rare form on Saturday night, as two sacks and boatloads of pressure had the linebacker preparing for his next conquest versus San Francisco. If Green Bay finds a way to win and gets to the NFC Championship, I suggest Clay gives the whole team free Fatheads.

8. Arian Foster: I'd rank Arian higher, but he probably couldn't handle it. Dude touched the rock 40 times, put Matt Schaub on his back and carried his team to a grueling 19-13 game that his quarterback tried to give away repeatedly. Much praise to Arian, but I imagine his reign is coming to an end soon, even if I picked the Texans to finish their season in New Orleans back in August.

14. Denver Broncos: They didn't even play this weekend, but dog ... did you know they're on an 11-game winning streak? Why didn't anyone tell me this? Like … are the Broncos the best team in the league? I mean … you know, let me chill. 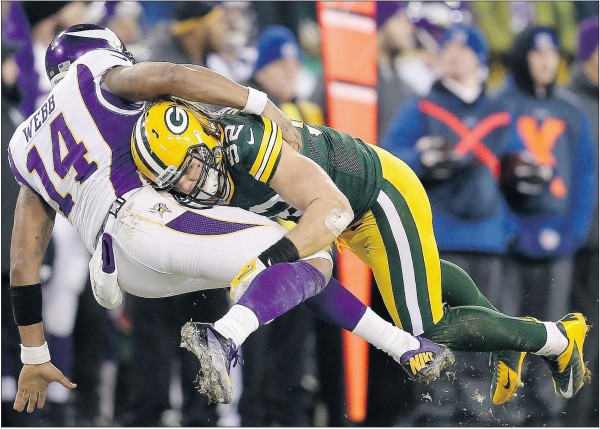 17. Adrian Peterson: Somehow All Day ran for 99 yards with Joe The Plumber playing quarterback. Wait … what? His name is Joe Webb? Oh ... he should totally go by the name Joe The Plumber.

20. Mike Mayock: Sir, your performance as the color commentator during a generally lackluster game between the Cincinnati Bengals and the Houston Texans was less dull because of your thoughtful analysis of the game. I'm concerned why you aren't on television more, but I guess NBC has a thing for Al Michaels and Cris Collinsworth. This sucks for everyone else involved.

27. Marvin Lewis: Hey man, run the damn ball. 11 carries for the guy with way too many names in his government? Good grief.

38. Joe Webb: WHY AREN'T YOU NAMED JOE THE PLUMBER YET?

183. Mike Shanahan: Outside of everything that happened with RG3 on Sunday night, I bet Redskins fans are even more upset that you didn't give Alfred Morris more than 16 carries. Yeah Shanahan, you know that tailback that wears #46? You know, the one you ran into the ground, who's barely old enough to buy booze? Yeah, him. Yes, so with reports out now that your star quarterback now tore his ACL and LCL, you didn't play your backup, you didn't run the ball, your son has matching tattoos with another man, and in general people don't like you … HOPE YOU HAVE A GREAT 2013 MIKE! By the way, you still aren't as terrible as this person.