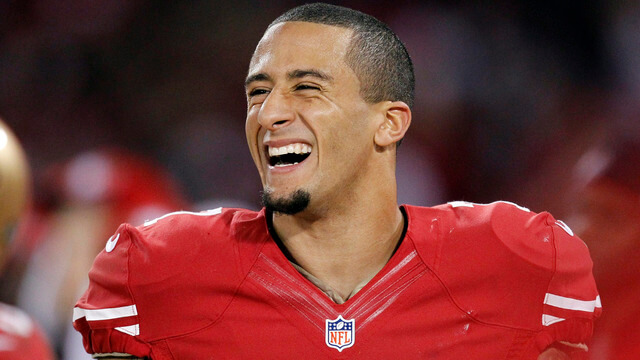 There's a sports bar that I frequent here in Oakland called The Grand Oaks. They serve some of the finest chicken wings I've ever come across in my entire life, and they're only $7. Who's going to pass up such a deal? Not me. Therefore, I was a paying customer at The Grand Oaks on both Saturday and Sunday, and I watched the divisional round of the playoffs with the people of the Bay Area. Here are some notes on what happened ...

Here are the playoff player power rankings for the divisional round ...

1. Colin Kaepernick: The tattoo-wearing, pistol-operating, dual-purpose quarterback for the San Francisco 49ers had the distinction of being the leading rusher during the divisional round of the playoffs with 181 yards versus the Green Bay Packers, rushing for two touchdowns, and threw for another two touchdowns. The man was firing laser beams to Niners receivers and running wind sprints on the Green Bay Packers defense with no care in the world. You know why? Because Colin Rand Kaepernick's hairline is immaculate. It's the only thing I could notice during the post-game, and then it made me insecure of my own fading to (not) black glory of a hairline. Colin's hairline is probably made of some combination of adamantium, Remy Martin and Elmer's Glue, that's how strong it is.

2. Tom Brady: The golden boy known around these parts as Sir Thomas Brady reminded everyone that he still is the king of quarterbacks in the (Ron Jaworski voice) "National. Football. League." The Houston Texans proved to be easy pickings once again as Sir Thomas ran his fingers through his hair like a glory boy would and got his New England Patriots to the AFC Championship for the 7th time. All in a day's work for the husband of a Victoria's Secret model.

3. Ray Lewis: 17 tackles for the Baltimore Ravens' resident reverend was enough to be the leading tackler in a truly bizarre and insane game that the boys in purple and black won versus the Denver Broncos. It was everything that you'd expect from the two-time Defensive Player of the Year and this generation's version of Dick Butkus. Ray Lewis delivered yet again. Now, with that being said ...

3a. Inaudible interviews featuring Ray Lewis: The sound that Ray Anthony Lewis delivered us post-game was nothing short of brilliant, inspiring and incomprehensible. With the signature moment being a defeated Peyton Manning coming up to Ray to give his good luck wishes and congratulations, Reverend Ray smacked the holy ghost out of the side of Peyton's head and totally disregarded the fact that the man just had neck surgery. It was scary and awesome simultaneously.

7. Tony Gonzalez: While Matt Ryan was able to eradicate his past bad experiences in the playoffs by finally getting a win in the postseason, for Tony Gonzalez this game means a little more. He too, like Ray Lewis, is on the brink of retirement following this season. He too, like Matt Ryan, had never won a playoff game in his career. He, more than any other, made two catches that only a Hall of Famer could. The first, while tip-toeing the back line of the endzone for the Falcons' opening score, and the second, a 15-yard hitch route with just seconds remaining and the Falcons down one, were both essential for Atlanta's huge win. Maybe the real story will be Gonzo vs. Ray-Ray, mano-y-mano right over the middle.

13. Joe Flacco: I'm not sure what got into Joe Flacco, but man … I don't think I've ever seen him play so well in such a big game. A bit of luck, a bit of moxie and a bit of mojo took over No. 5's body in Denver, and the entire Ravens defense appreciated Flacco's efforts. One for the ages indeed.

25. Richard Sherman: The hype machine of Richard Sherman was on 10-mode Sunday, and outside of getting beat deep on a Roddy White bomb from Matt Ryan, Sherman played admirably in defeat. The man is crazy good, and you can consider TSFJ permanent members of his fan club.

58. Earl Thomas: Sucks it had to be you, buddy, sorry. Next time, don't fail the Quizz.

88. Clay Matthews: I'm not sure if he was at the game or not. I never heard his name called.

4399. Champ Bailey: Say man, you can't be out here being named Champ and all and have the kind of day you had on Saturday. Yes, everyone has a bad day every now and then, but goodness gracious, can you request for some safety help? How about backing up a few yards up off of Torrey Smith? We might not be able to call you Champ anytime soon … how about Carl? Cliff? Cleo? How about Curly? Whatever it is, you need to stay off the mean streets of Denver for a minute and just chill.