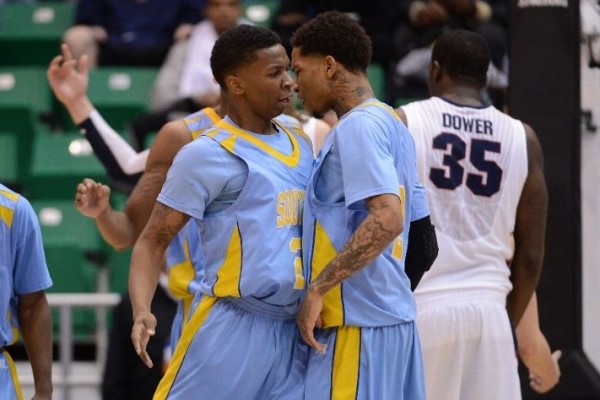 At some point I could feel it, watching the game on my 13" laptop while in an arena filled with 18,000 people not giving a zero damn about said game that was on my 13" laptop.

I'm sure all the people could feel it around the world, be it if they were playing hooky from the job or took the day off like a responsible corporate citizen, I knew they could feel it too.

And I'm positive that the people in the EnergySolutions Arena in Salt Lake City, Utah could feel it. Even the Gonzaga fans, knowing that they could be the witness to history. That THE moment of all moments could be transpiring in front of their very eyes.

What the Southern Jaguars almost accomplished on Thursday afternoon against the Gonzaga Bulldogs, #1 ranked team in the country, was something that every person in their right mind was rooting for. Sure, there were some selfish cretins who couldn't think past their piddly brackets, but we're not here to support their kind. What we're here to support is that magical set of circumstances that were in play in Salt Lake City. Take note of the following:

And this is the most important point, becuase if it were a fluke then no one would've respected the miracle on our hands. Were there some skeptical calls? Sure. Was there some luck involved? Absolutely. However, when hasn't there been skeptical calls and luck involved in damn near any contest we've ever witnessed? Shit happens.

Southern played unafraid of Gonzaga, they traded every punch Gonzaga threw with one right back, and their journey became undeniable. That inevitability is what turns a crowd against the favorite and for the underdog, to pull for the upset, to lean towards the storyline that they can tell their grandkids about.

That moment, when the mob sitting on the sidelines, watching on flat-screen televisions at the bar or in the basement, or staring intently on a 13" laptop screen, is when being fickle becomes a truth serum. Southern, the team with the ill-fitting uniforms, the nattily-dressed head coach, the players who'll stick out like a granola bar at a barbecue in Salt Lake City, almost gave us that moment...and even in defeat, I'll never forget the day when the mob turned against the original underdogs in Gonzaga, and rooted for the 16-seed Southern Jaguars instead.