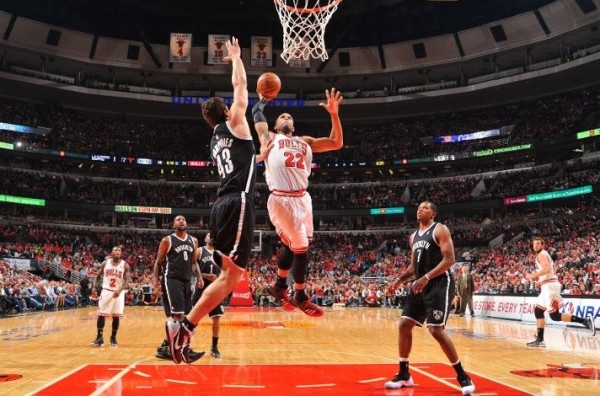 Thursday night in the sports world was supposed to follow a certain script. That script would include another easy win for the Miami Heat over the Milwaukee Bucks, another knock'em out drag'em out slobberknobber between the Los Angeles Clippers and the Memphis Grizzlies and the 2013 NFL Draft would consume roughly five hours of our life on a work night.

However, there were two glitches in the matrix that occurred that caused us all to be put on alert.

First, we must pray for Kris Humphries.

Oh what is there that we could NOT say about the former Mr. Kardashian, that hasn't been said by every other news outlet, blog and rumor mill on these here internets. Lets just highlight who Kris Humphries truly is, a man who is a capable inside finisher and rebounder who disdains playing defense like he disdains rap songs that coyly reference the former owner of the team he plays for possibly cutting him from the team.

Yet and still, we're gathered here today to talk about Hump's defense, and the lack of it displayed for a Brooklyn Nets team that could desperately use it.  Kris, look man, Jay-Z don't technically own the team anymore, even if he does still sit courtside. Your ex-wife is with a dude who wore a bare midriff out and about last night. Dog, your team is in the playoffs! You should winning right now, and yet you out here letting Taj Gibson bang on your neck in such a terrible fashion. 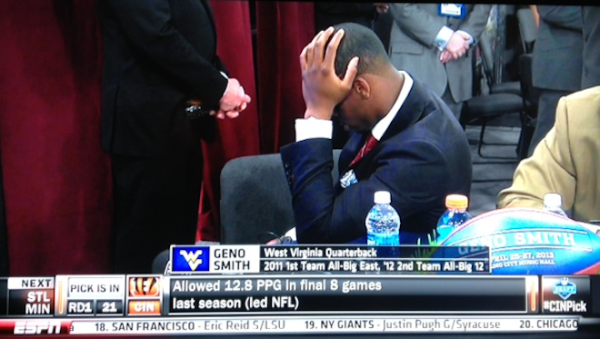 Second, we must pray for Geno Smith

I can really explain why we need to form a prayer circle around Geno by using a few tweets:

Just want to thank all those so called "experts" who say I can't be an NFL QB. Thursday will be a special day but the work has only begun

Things seem all on the right track on Tuesday afternoon, two days before the draft. Full of confidence and swag. Good for Geno.

@genosmith_12 Remember, tonight is not a "defining moment", it is just A MOMENT that U can take and use as fuel to dominate the NFL 4 years

Trent Dilfer tweeted Geno Smith some inspirational words late in the first round as it was evident that Geno Smith was not going to get any love. Geno's head was down, he looked pitiful and despondent, and most importantly...I just couldn't imagine being a quarterback with big dreams to go in the first round, and then receives some kind words from an eternal journeyman like Dilfer.

If I'm Geno Smith and I see Trent Dilfer tweeting me words of encouragement...I mean, by law, I have to take a bottle of Henny to the face.

I'm a terrible person, but that's probably exactly what I'd do if I were Geno. However, leave it up to Justin Tinsley to provide some clear perspective.

"Well, Geno Smith did something even Tracy McGrady couldn't do. He got out of the first round." -- @justintinsley

These are  Tinsley's words, but I had to tweet them. At least he's better than Tracy McGrady as of right now.

Now, the news is that Smith will not come back for the 2nd-3rd rounds of the NFL Draft, presumably because the man ran out of suits for the trip. Or that he's embarrassed about the bad advice that he received. Whatever, dude ain't showing up yesterday, and that's a shame. We need Geno on the prayer list because I need the man to have some people around him to tell him to keep his chin up. Where are his family members and friends? Hey man, all 32 teams passed you once but, you're still going to get drafted!

3 Replies to “The Prayer List: Geno Smith And Kris Humphries Really Wanted To Just Get Away”