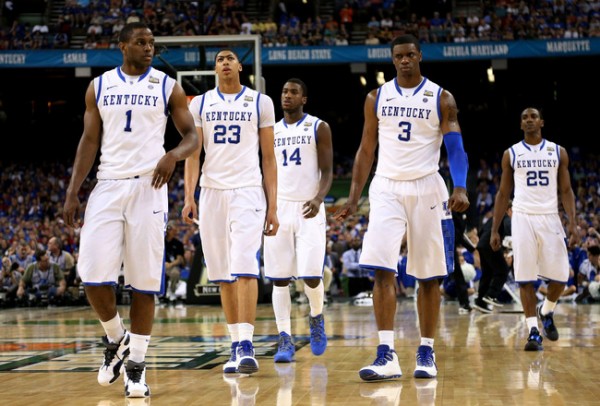 Yesterday evening, members of the National Champion Kentucky Wildcats decided to host a press conference to announce they'd be taking their talents to the NBA next year, with freshmen Anthony Davis, Michael Kidd-Gilchrist and Marquis Teague, sophomores Terrence Jones and Doron Lamb and senior Darius Miller all declaring for the draft.

We haven't seen anything this extreme with one team importing talent into the NBA since...2010. Yep. The great John Calipari had a similar class just 24 months prior with five players drafted in the first round.  Four freshmen -- John Wall, DeMarcus Cousins, Eric Bledsoe and Daniel Orton -- and junior forward, Patrick Patterson.

Cal's 2010 class is a mixed bag of results thus far. With talent popping out of the pores of young guns like Wall and Cousins and promise yet to be fulfilled from Bledsoe and Orton, I can honestly say that I have no clue how good this group will be in a few years. Can Anthony Davis and Michael Kidd-Gilchrist eclipse their older alumni brothers?

One simple question. Which class will be better in the NBA? 2010 or 2012? Let us know as you read through your Starting Lineups reading material this morning.

The No-Look Pass: Dwight Howard Has To Go

No Guts, No Glory: Is Arkansas really a great college football job?

Lifehacker: Turn Any Messenger Bag or Briefcase into a Backpack in an Instant