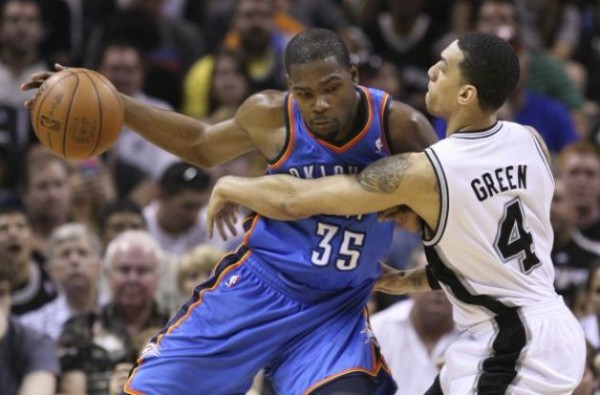 Watching my favorite team get bludgeoned repeatedly last night by the San Antonio Spurs made me remember a particular snippet from an article Chuck Klosterman wrote titled, "What Ever Happened To The Triangle Offense?" I'd suggest reading the entire piece, as Klosterman in general is one of my favorite writers, but this passage always makes me wonder what if:

When the Bulls ran this offense in the '90s, the key adaptation Jackson made was moving Scottie Pippen to the top of the key and playing Jordan as a forward (in Los Angeles, he made a similar tweak with Lamar Odom and Bryant). But those players would have succeeded in any offense. The real advantage of the Triangle is what it does for players with less ability. Most NBA sets are static; they require perimeter players to create their own shot, usually off the dribble. The Triangle's relentless off-the-ball movement allows standing jump shooters to contribute within their own preexisting skill set. This is why it worked so well for John Paxson and Steve Kerr, and even for guys like Sasha Vujacic and Luke Walton. You don't need four or five athletic scorers to make the Triangle work. Two is plenty, because it amplifies the value of role players.

"When I look at Oklahoma City," the anonymous coach said, "I see a team that is built to run the Triangle. They are so designed to run the Triangle that it's almost a joke. Imagine them running a two-man game on the weak side with [Kevin] Durant and [Russell] Westbrook. Who the fuck is gonna stop that?"

Clearly the Thunder's issues versus the Spurs aren't all attributed to a half-court offense that is more free-wheeling like Jimi Hendrix and less technical like Eric Clapton (stolen reference from Bomani Jones), and the Spurs have used that free-wheeling style against them on both ends of the floor. Defensively, the Thunder are being exploited to a whole other degree. I don't have a great response for that yet, but when OKC struggles to get efficient shots for their players, I think of this article.

One step at a time, boys. Here's your pertinent reading material for Wednesday.

Complex: Does Tim Tebow Have a Secret Girlfriend?

Nardwuar: Nardwuar vs. Curren$y Pt 3: The Nard Strikes Back!

Bull City State of Mind: Change Is Evident For The Tampa Bay Buccaneers

FOX Deportes: The 5 Things LeBron James Must Do vs. Boston

Grantland: The Most Fun Team in Baseball

H1gher Learning: 10 Dope Snapbacks From Brands You Might Not Know

One Reply to “Starting Lineups: What If The Oklahoma City Thunder Ran The Triangle?”