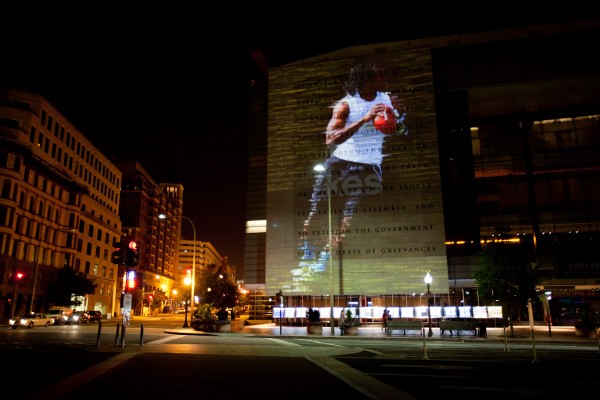 Robert Griffin III will officially be touching down in Washington, D.C. and will try and walk in the footsteps of other illustrious quarterbacks like Billy Kilmer, Sonny Jurgensen, Joe Theismann, Doug Williams, and Mark Rypien to be the next leader of DC's favorite football team.

Per the good folks at adidas Public Relations, the Three Stripes "lit up the town" for the Washington Redskins newest quarterback in the nation's capital.

To welcome Robert Griffin III to Washington, D.C. and to celebrate his preseason home opener, adidas is lighting up the names of thousands of passionate football fans on a massive, moving projection of the Redskins quarterback displayed across the Newseum's 74-foot-high marble First Amendment tablet, down the street from the White House. Fans who joined the conversation on the adidas Football Facebook page and shared what "light" gets them on the field will see their name light up within the projected moving image of the Heisman Trophy winner two nights before his Redskins home debut. Three projectors were used to display the 74-foot image of RGIII in action with the lightest football cleats in the game—the adizero 5-Star Mid.

The man touches down in DC and his face is being displayed on monuments in the city? Brother, you've won.

Now, its time to back it up on the field for RG3, and the regular season is coming up in a few short weeks. Can't wait. Enjoy your pertinent reading material for Friday and partake in all types of chicanerous tomfoolery this weekend.

Players Perspective: Ndamukong Suh says there’s nothing about his hits that would cause concussions

NFL Films Blog: Tales from the Vault: Birth of the Knocks