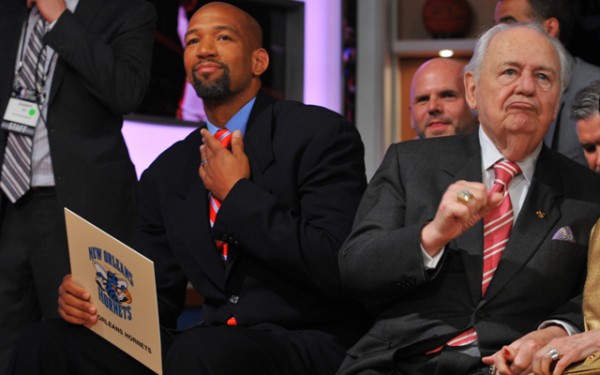 Maybe David Stern is still mad at Michael Jordan for gambling back in the early 90's (this is Bill Simmons' age-old theory) or maybe The Commissioner felt like he still owed the New Orleans Hornets a sold after trading away Chris Paul and turning down a potentially better offer from the Los Angeles Lakers in the process.

From the folded envelope for the New York Knicks in the 1985 draft to the lack of championship parity, David Stern has had the conspiracy theory card laid at his feet for a long time. Maybe it's really just a dose of good luck (for the Hornets) and bad karma (for the Bobcats), but its not fun to say that. So....David Stern, you had this planned all along. I know you did.

Regardless of how it came about, the Hornets do seem poised for a potential rebound. If the Hornets do select former Kentucky big Anthony Davis No. 1, they're poised to use their No. 10 pick (via the CP3 trade) to potentially take Weber State's electric point guard Damian Lillard or North Carolina's uber-facilitator Kendall Marshall.

Congratulations to the New Orleans Hornets; as for David Stern....I got my eyes on you. Here's your pertinent reading material for Thursday.

Forum Blue and Gold: Past, Present and Future of the 2011-12 Lakers

FOX Deportes: With Williams likely out, who faces Canelo?

Hoops Authority: Deron Demands for Dwight Could Ruin Nets for Years to Come

How To Make It: Trailer For "Life As A Sneakerhead"

Hardwood Paroxysm: That Was Mario Chalmers, Everyone

With Leather: DeShawn Stevenson Has An ATM In His Kitchen