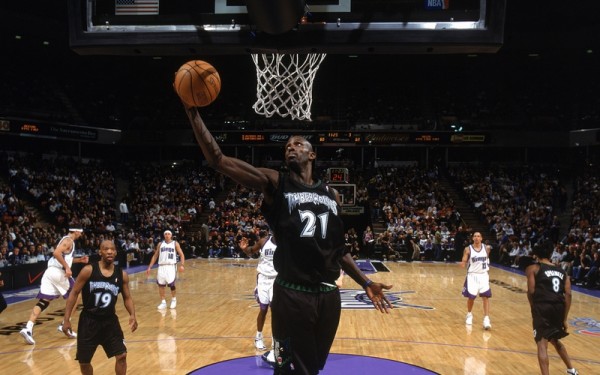 I make it a point to read the historical writing of Ralph Wiley. You should too. RIP.

Late last night, after watching LeBron James and the Miami Heat lose in Game Five of the Eastern Conference Finals, I went on the digital joy ride that supplanted the automobile joy ride that I used to go on after chaotic events happen in my life. Why? Because gas is expensive, dog.

Anyway, I came across this gem Wiley wrote five years ago, and Kevin Garnett was squarely in the crosshairs. The playoffs where in full swing, and Garnett held his franchise's fate in the palm of his hands. A cross-analogy between the world's greatest basketball players and KG was made*, and I was floored. Kevin Garnett, is the good Michael Jordan. (Wiley also said that Kobe Bryant was the bad Michael Jordan, which is another reason why you should read the article.)

In many ways, Garnett makes you want to get out the cookie cutter. He's the Good Jordan. He knows the game is about the team over the self. When people say the young players have no sense of history, then he makes it a point to talk about Spencer Haywood in his MVP press conference. When people start to grumble, whinny and whine about high schoolers being drafted into the league and never spending any time in a minor league, collegiate or not, and never really learning how to play the game beyond a SportsCenter highlight reel, Garnett tries to be like the voice of calm reason.

That's a problem? KG is good. He's too good.

Big Ticket's got to get mad. He's got to go straight Howard Beale and Great Ahmed Khan from "Network." He's got to get mad and convince his teammates to follow him over that hill, follow him to their windows and throw them open and say, 'I'm mad as hell, and I'm not going to take this any more!' KG is Next Level, the next level of ball after Jordan, only he's too good, too nice, too sweet. He's Jordan after a Valium, Jordan on Prozac, a kinder, gentler Jordan, which plays well in the lobby; so does Mag Dog Madsen, for that matter, and even he's got more of an edge than KG.

There is no way in the eight walls of hell the Kings have an answer for KG. Flopmeister Vlade? Please. Brad Miller? Can do some things, but one of them isn't keeping KG from shooting over the top of him. Chris Webber is half-dragging a leg, and if you turn up the heat on him, he looks for an escape hatch anyway. By sheer force of will and talent, KG can force the Kings' defense to congeal around him, and double him, and then he should be able to pick them apart with passes to open T'wolves. If they don't hit these open shots, KG should scream at them and then look daggers at Flip Saunders and his old college teammate Kevin McHale until they get somebody in there who can hit those open shots.

KG has his MVP trophy -- but is he mean enough to lead the Wolves past the Kings? KG has to add some Bad to his Good to go Next Level. In a way, he has to stop caring. In a way, he has to turn off the spigot to his big heart. Only then can KG strike fear as well as admiration in the domes of the opponent. He has to get in their heads, mess with minds, have 'em looking for him even when he's not there. Make 'em, how you say, in the words of Tony Montana, 'paranoy.'

It's crazy to think of Garnett in a gentler, kinder way in 2012. Now we mock him for being a tough gu, but, in reality, it was as recent as five years ago when many questioned that he wasn't tough enough. Garnett had to get older to really understand, "how to let it all hang out." Even if it means dirty tactics, goon-like behavior and unleashing sheer insanity at a given moment. It's the reason why the interviews of Garnett have been golden in recent years. The man doesn't care anymore.

Kenny said it best last night, "KG's the last of a dying breed." Its the one thing that concerns me the most about LeBron James. He cares WAY too much about what others think. KG doesn't. That inability to care has the Celtics one game away from their third appearance to the NBA Finals in five years.

*Wiley went into his "Dogman" persona for this one, which was always a treat.

FOX Deportes: The Cinco: The Five Strikers That Matter In Euro 2012

Players Perspective: Hilarious: What Drew Brees Is Doing While He Waits for a New Contract

The Starting Five: Is recreational play the smartest move for athletes in the offseason?